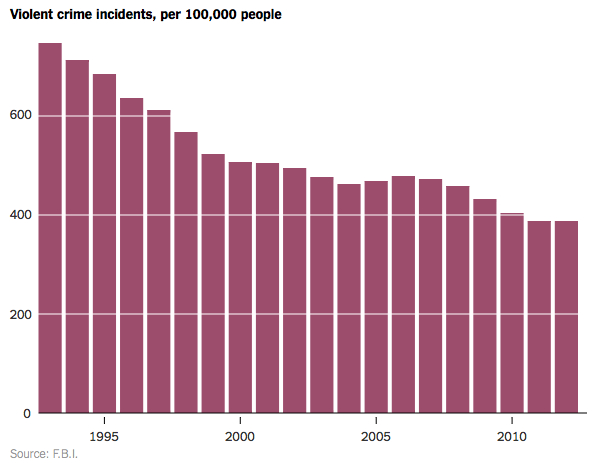 Here’s a narrative you rarely hear: Our lives are safer. This message is so rarely heard that half of all respondents to a recent YouGov poll suggested that the violent crime rate had risen over the past two decades. The reality, of course, is that it has fallen enormously.

The decline in violent crime is one of the most striking trends over recent decades; the rate has declined roughly by half since 1993…

It’s an unfortunate fact that media reporting on individual crimes yields a relentlessly dismal drumbeat of downbeat news. But even as each reported crime yields a story that is terrifying enough to shape our perceptions, the truth is that none of them tells us much about the broader trends. Far better to ignore the anecdotes and focus instead on the big picture, and the hard data tells us: There’s been a remarkable decline in crime.

There are beaucoup theories aimed at trying to determine scientifically the whys and wherefores of this decline. It is, after all, a good thing. Worth continuing – whatever it is we’re doing right.

Or you could just follow the lead of neo-Conservatives, neo-Confederates, neo-Nutballs and lay it off on a conspiracy by the mainstream media and New World Order politicians in Washington, DC, to hide the deadly truth.

The rule, proposed in March, sought to clarify which bodies of water, such as wetlands and streams, are subject to agencies’ authority under the act. EPA Administrator Gina McCarthy has said the rule does not significantly expand the agency’s existing authority.

Republicans said the rule would go too far and subject trivial bodies of water to federal regulation.

What passes for conservatism nowadays believes that wife-beating, lynchings, collateral murder in wherever is this year’s war – are all “trivial”.

DeFazio said that halting implementation of the proposed rule would prevent the EPA from simply clarifying which bodies of water are subject to federal regulation.

“Where do we end up if this cockamamie thing passes the House and becomes law, which it won’t?” DeFazio said. “Well, where we end up is back in the earlier era of the 2003 and 2008 guidance.”

The dimbulbs in the House of Representatives want the Army Corp of Engineers to help the develop new regulations on water. Their history along the Mississippi River leading up to the Hurricane Katrina disaster will stand them in good stead.

Who knows, maybe Congress can rehire the clown show inside the old Department of the Interior under George W, Bush that used to party with the Oil Patch Boys. Working for a living probably still doesn’t agree with them.

A Boston-area man long suspected of two 2004 rapes was formally charged after a new DNA test linked him to the crimes and excluded his twin brother.

McNair had been charged earlier and spent almost two years in jail. A judge ordered him released, and prosecutors dropped the charges while the new test, which can distinguish between identical twins, was conducted.

Prosecutors in Suffolk County said the test, used for the first time in Massachusetts, found there was only a 1 in 2 billion chance the DNA in the samples being tested could have come from McNair’s brother, Dwight. McNair was indicted on eight counts of rape and two of armed robbery.

Another man, Anwar Thomas, 32, pleaded guilty in the case in 2011. But the prosecution of McNair was stymied by the possibility the DNA could have been his brother’s.

Silly me. I wrote the headline up top because CSI Cop Shows will lose part of a favorite plot-line. Now, they have acquired a new twist to the same old plot.

And, yes, “same old plot” isn’t especially appropriate since police-level DNA analysis has only been around 1986.