A Syrian refugee child eats inside his family’s tent at an informal settlement in Deir al-Ahmar, Bekaa valley, Lebanon, September 16, 2014.

No, I don’t know which side he is on. Does it matter?

An international day of action on climate change brought tens of thousands onto the streets of New York City on Sunday, with organizers predicting the biggest protest on the issue in five years.

Organizers said some 550 busloads of people had arrived for the rally, which followed similar events in 166 countries including Britain, France, Afghanistan and Bulgaria. Thousands more came by public transportation, walked or traveled in private cars…

A crowd including U.S. senators Bernard Sanders of Vermont and Sheldon Whitehouse of Rhode Island marched along the city’s Central Park, through midtown Manhattan to Times Square, where they stopped for a moment of silence at 12:58 p.m..

“This is the planet where our subsequent generations will live,” Ban told reporters. “There is no ‘Plan B,’ because we do not have ‘Planet B.'”

Meanwhile, the opportunist creeps in Congress came back to work for 4 days after taking several weeks off for vacation. Then – consistent with being the worst Do-Nothing Congress in the history of Republican obstructionism – they shut down until after the mid-term election in November.

Not that anything meaningful would have been accomplished. We are a nation of obstinate and ignorant sheep, complaining about lack of change, fearing change at the same time. Fence-sitting has become the national pastime. 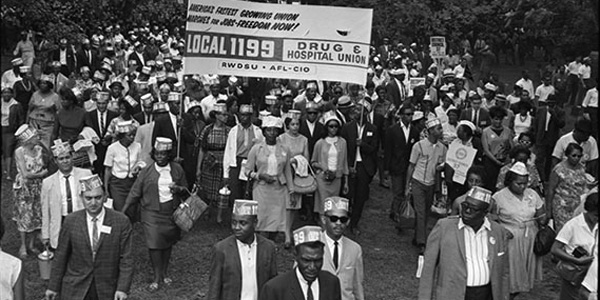 National AFL-CIO president Richard Trumka says that the unrest in Ferguson illustrates the need for a more vigorous national discussion on race and racism…And labor unions, which have had their racial problems, must be part of the conversation, he acknowledged.

Trumka was interviewed after he had addressed Missouri labor leaders at a convention at the downtown Crowne Plaza hotel.

In his speech, which was closed to the press, Trumka noted the labor connections on both sides of the unrest, which began with the shooting death of an unarmed teenager, Michael Brown, by a Ferguson police officer.

“Union members’ lives have been profoundly damaged in ways that cannot be fixed,” Trumka said, according to a transcript released later. “Lesley McSpadden, Michael Brown’s mother, who works in a grocery store, is our sister, an AFL-CIO union member, and Darren Wilson, the officer who killed Michael Brown, is a union member, too, and he is our brother. Our brother killed our sister’s son and we do not have to wait for the judgment of prosecutors or courts to tell us how terrible this is.”

Trumka emphasized that he was not taking sides on the particulars of the case. “We cannot wash our hands of the issues raised by Michael Brown’s death. That does not mean we prejudge the specifics of Michael Brown’s death or deny Officer Darren Wilson — or any other officer — his or her rights on the job or in the courts,” he said.

“But it does demand that we clearly and openly discuss the reality of racism in American life. We must take responsibility for the past. Racism is part of our inheritance as Americans. Every city, every state and every region of this country has its own deep history with racism. And so does the labor movement…”

In his speech and in the interview, Trumka tied the nation’s longstanding racial troubles to what he viewed as corporate greed and “playing the race card over and over and over again.”

“Quite frankly, working people have been losing for years,’’ Trumka added.

Trumka includes some relevant history sharply critical of the history of racism not addressed by trade unions – though they are the only body directly representing working people.

Predictably, NPR in St, Louis is candyass enough to add copy from a separate interview with a right-wing politician from the Republican Party – for the usual reason I imagine. “Look at us, we’re safely in the middle of every issue.” Like every fence-sitter unconcerned about justice.

American trade unions – particularly those that rolled over and played dead during the McCarthy Era – were not only cowards about racism and other bigotries, they embraced it as central to their very existence.

In my lifetime as a proud member of a couple of trade unions, I will never forget – or excuse – one of the biggest I belonged to less than fifty years ago still had a constitutional ban barring Blacks or women from heading the national union.

There was hardly an organization associated with the needs and rights of working people that didn’t support or endorse MLK’s March on Washington in 1963 – with the glaring exception of the AFL-CIO. Many individual unions did participate, especially the UAW and the Hospital Workers’ Union, Local 1199. Not the suits at the top of the American Labor movement.