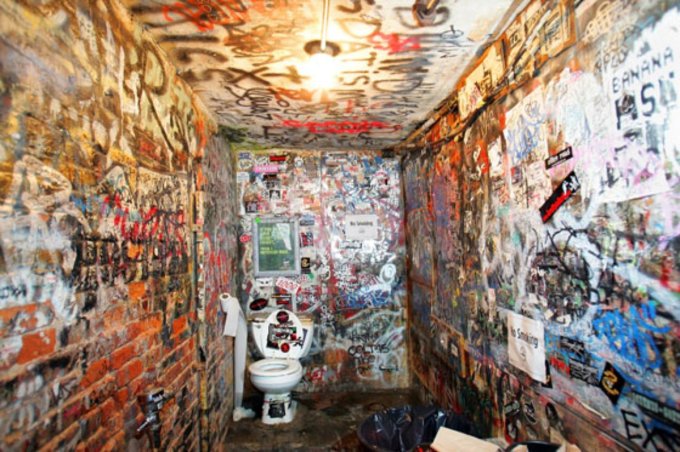 A gathering of her peers

The agency on Thursday announced it was investigating 21-year-old Casey Nocket’s recent cross-country jaunt during which she allegedly painted faces and sketches on rock formations in as many as 10 national parks, including Rocky Mountain National Park.

The agency, which did not name Nocket, said its investigation spans the nation’s most iconic Western parks. Investigators said the woman’s vandalism was found in Yosemite and Death Valley national parks in California, Crater Lake National Park in Oregon and Zion and Canyonlands parks in Utah. National Parks Traveler on Thursday posted a photo of Nocket’s trademark scribble inside Rocky Mountain National park.

Park officials said in a statement it takes seriously the issue of vandalism, which can be a felony when committed in a national park…

An online petition at whitehouse.gov had collected more than 2,220 signatures Thursday afternoon, urging authorities to pursue “the most serious charges” and pleading “please don’t allow her to receive a slap.”

I have no sympathy for the Let’s Pretend-to-be-Artists who feel the need to display their crap smears on someone’s home or property, a public place they choose because no one cares to come and look at their pitiful attempts at self-agrandizement.

I have no interest in confronting her graffiti when I set out to be part of nature apart from urbanscapes. As a matter of princple, I don’t need to see her mediocrity on subway walls either. I see no justification for defacing the world around us. I’ll take it as it has grown in life and art, commerce and toil, on its own terms. Play therapy for a middle-class neurotic doesn’t qualify.

Traveling by jet airplane may not be the greenest mode of transportation, but if you’re landing at Schiphol Airport in Amsterdam, at least you’ll be able to get into town under pure electric power.

The Dutch airport has inaugurated a new fleet of 167 Tesla Model S taxis, giving it the largest fleet of all-electric taxis of any airport in the world. The cabs will be operated by two taxi companies – BBF Schipholtaxi and BIOS-groep – who will shuttle passengers to and from the airport with zero emissions.

“This represents a crucial step in our efforts to reduce CO2 emissions and become one of the world’s three most sustainable airports,” said Schiphol Group CEO Jos Nijhuis. Last year, the airport authority brokered a deal to buy Europe’s largest fleet of electric buses to shuttle passengers to, from and between terminals as well. So whatever you may be planning to burn while in Amsterdam, at least it doesn’t have to be fossil fuels.

Oh – and by the way, what kind of taxis are at your local airport? In my neck of the prairie, they look like leftover Ford Crown Vics bought secondhand from the State Police.

DNA analysis of a 45,000-year-old human has helped scientists pinpoint when our ancestors interbred with Neanderthals…The genome sequence from a thigh bone found in Siberia shows the first episode of mixing occurred between 50,000 and 60,000 years ago.

The male hunter is one of the earliest modern humans discovered in Eurasia.

The study in Nature journal also supports the finding that our species emerged from Africa some 60,000 years ago, before spreading around the world…

The work of Prof Svante Paabo, from the Max Planck Institute in Leipzig, Germany, is rewriting the story of humanity. Prof Paabo and his colleagues have pioneered methods to extract DNA from ancient human remains and read its genetic code.

From this sequence, the scientist has been able to decipher an increasingly detailed story of modern humans as they spread across the globe.

“The amazing thing is that we have a good genome of a 45,000-year-old person who was close to the ancestor of all present-day humans outside Africa…”

Prof Paabo has analysed DNA from part of a leg bone of a man that lived in Western Siberia around 45,000 years ago. This is a key moment at the cross roads of the world, when modern humans were on the cusp of an expansion into Europe and Asia.

The key finding was that the man had large, unshuffled chunks of DNA from a now extinct species of human, Neanderthals, who evolved outside of Africa.

“Our analysis shows that modern humans had already interbred with Neanderthals then, and we can determine when that first happened much more precisely than we could before…”

Prof Paabo’s 45,000-year-old man seems to have lived at a point that was both geographically, and in time, a crossroads for humanity…”This does seem to mark a watershed where modern humans were pushing the boundaries further and further in their dispersal out of Africa,” according to Prof Chris Stringer.

Prof Paabo also compared the DNA of the man living 45,000 years ago with those living today. He found that the man was genetically midway between Europeans and Asians – indicating he lived close to the time before our species separated into different racial groups.

Fascinating stuff. I’ve had DNA tests that determined the coarser texture of how my ancestors spread from their African genesis into the steppes of Central Asia. Eventually ending up traveling west to the Scottish Highlands and, then, sweeping back east to the Danube before retreating to stay in Scotland.

Almost a decade ago, scientists from Canada and the United States reported that they had created a vaccine that was 100 percent effective in protecting monkeys against the Ebola virus. The results were published in a respected journal, and health officials called them exciting. The researchers said tests in people might start within two years, and a product could potentially be ready for licensing by 2010 or 2011.

It never happened. The vaccine sat on a shelf. Only now is it undergoing the most basic safety tests in humans — with nearly 5,000 people dead from Ebola and an epidemic raging out of control in West Africa.

Its development stalled in part because Ebola is rare, and until now, outbreaks had infected only a few hundred people at a time. But experts also acknowledge that the absence of follow-up on such a promising candidate reflects a broader failure to produce medicines and vaccines for diseases that afflict poor countries. Most drug companies have resisted spending the enormous sums needed to develop products useful mostly to countries with little ability to pay…

The NY TIMES doesn’t need to waste space on defending the greed of corporate pharmaceutical giants. That’s what Congress is for.

Now, as the growing epidemic devastates West Africa and is seen as a potential threat to other regions as well, governments and aid groups have begun to open their wallets. A flurry of research to test drugs and vaccines is underway, with studies starting for several candidates, including the vaccine produced nearly a decade ago.

A federal official said in an interview on Thursday that two large studies involving thousands of patients were planned to begin soon in West Africa, and were expected to be described in detail on Friday by the World Health Organization.

With no vaccines or proven drugs available, the stepped-up efforts are a desperate measure to stop a disease that has defied traditional means of containing it.

Kind of like white folks noticing we don’t live in a post-racial society regardless of what Republicans say. The TIMES notices what anyone who cares about public health has always known. If it can make a bunch of money, any illness can receive study and attempts at a cure from the medical-industrial complex. The rest can waste their energy on hope.