A Connecticut father sued a school district for barring his daughter from class because of fear she may be infected with Ebola after a trip to a family wedding in Nigeria, in what may be the first such U.S. lawsuit over the virus.

Stephen Opayemi said he and his 7-year-old daughter, who is in the third grade, returned to the U.S. Oct. 13. He was told by Milford School Superintendent Elizabeth Feser that his daughter would be removed by the police if she went to school Oct. 20, according to a complaint filed yesterday in New Haven federal court.

Actually…on Oct. 20, Nigeria was declared Ebola-free by the World Health Organization after no new cases were reported in 42 days…

Opayemi said his daughter didn’t have a fever or other symptoms of Ebola, and that he offered to have them both tested for it. He accused the school district of violating the Americans with Disabilities Act by denying access to an education. He seeks damages for her emotional trauma and an order allowing her to return to school immediately.

Throughout the GOUSA, the safe qualification for school administration continues to be ignorance.

It helps when you’re backed up by an governor who has “quarantined” more people than any other US official. Even when they’ve tested negative for ebola. 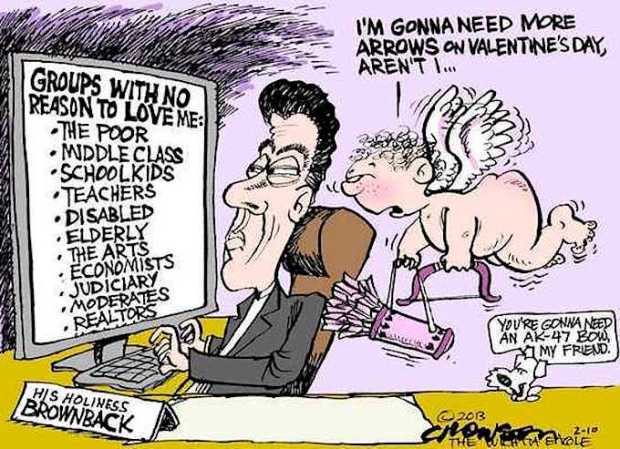 The Republican party headquarters in Wichita, Kansas, shares space in a strip mall with Best Friends Pet Clinic, a cowboy-boot repair shop and a Chinese restaurant called the Magic Wok. Inside, on a recent Wednesday afternoon, a modest gathering of party faithful mill about, I’M A BROWNBACKER stickers affixed to their blouses and lapels.

It’s a terrible slogan. Four years ago, when Kansas Gov. Sam Brownback first took office, you might’ve wondered if these people, on some subliminal level, actually wanted to be humiliated by a filthy-minded liberal activist looking to add a new “santorum” to Urban Dictionary. As a senator and a failed presidential candidate, Brownback was already one of the nation’s most prominent social conservatives, “God’s Senator,” in the words of a 2006 Rolling Stone profile. But Brownback turned out to be even more radical when it came to economic policy. In 2012, he enacted the largest package of tax cuts in Kansas history, essentially transforming his state into a lab experiment for extreme free-market ideology. The results (disastrous) have reduced the governor to making appearances at grim strip malls like this one in a desperate attempt to salvage his re-election bid.

The last time I came to Kansas, in March 2013, Brownback could often be found wandering the halls of the state Capitol, sporting one of his signature sweater vests, smiling and nodding at passing strangers or offering impromptu lectures to schoolchildren paused in front of the oil painting of John Brown, the fearsome Kansas abolitionist, that hangs outside his office. Here in Wichita, though, he looks exhausted. When he takes the stage, he squints out at the audience through puffy eyes. His Texas counterpart, Gov. Rick Perry, stands behind him, having been summoned north to help bail out Brownback’s flailing campaign…

Then the Texan steps to the podium and delivers a version of a speech I saw him give earlier this year in Kentucky, where he had been mobilized on a similar mission for Mitch McConnell. After boasting about all the jobs his policies have drawn to his state, Perry praises Brownback for placing Kansas on a similar “upward trajectory,”…

There are a couple of problems with Perry’s speech. First of all, he happens to be delivering it in Wichita, where, this summer, Boeing, for decades the largest private employer in the state of Kansas, shuttered its entire operation, shifting those jobs to cities like Seattle, Oklahoma City and San Antonio, Texas (oops).

The larger problem, of course, is that Perry wouldn’t even have to be here in Kansas if Brownback’s economic plan had not already proved catastrophic…not only cutting taxes but also slashing spending on education, social services and the arts, and, later, privatizing the entire state Medicaid system. Brownback himself went around the country telling anyone who’d listen that Kansas could be seen as a sort of test case, in which unfettered libertarian economic policy could be held up and compared right alongside the socialistic overreach of the Obama administration, and may the best theory of government win…

That word, “experiment,” has come to haunt Brownback as the data rolls in. The governor promised his “pro-growth tax policy” would act “like a shot of adrenaline in the heart of the Kansas economy,” but, instead, state revenues plummeted by nearly $700 million in a single fiscal year, both Moody’s and Standard & Poor’s downgraded the state’s credit rating, and job growth sagged behind all four of Kansas’ neighbors. Brownback wound up nixing a planned sales-tax cut to make up for some of the shortfall, but not before he’d enacted what his opponents call the largest cuts in education spending in the history of Kansas.

Read ’em and weep, folks – except the good folks don’t deserve the tears. They knew what this idiot was going to do. Even though every previous attempt by a supply-side economics reactionary had failed – all the way up to and including Reagan’s guru, David Stockman. Read Mark Binelli’s whole article.

They voted Brownback into office. He did what he promised to do. The state now waits for bankruptcy, fully prepared to deal with nothing but more disaster, education system crushed, employers ready to flee.

Any history-literate cynic knows American aren’t well enough-educated to vote in their own economic interest. Our nation’s history of bigotry and racism aid the whole process. Reactionary demagogues who would only be considered fringe candidates in other Western nations regularly take their seats in Congress. But, still – Kansas voters outdid themselves with God’s favorite candidate.

When Honda unveiled the slimmed-down βeta version of its Uni-Cub last year, it might have thought the minimalist electric vehicle would find its most enthusiastic audience inside office buildings, where it would simultaneously lighten the load of worker drones and perhaps inject a bit of rolling robotic tech-type fun into an otherwise drab and dreary day. It was wrong. Clearly, this personal mobility machine was destined for greater things.

For instance, it could be used for electric unicycle square dancing (Okay, technically the Uni-Cub β employs one wheel and a caster-type ball, thereby disqualifying it from unicycle status, but whatever.) Or even better, it could be a platform upon which the power pop group OK Go and a few hundred Japanese school girls could perform awesome maneuvers, including the aforementioned electric unicycle square dancing, in their latest totally amazeballs video. Honda reportedly paid for the new video, which was shot at half-speed and when you watch it, you’ll know why.

As is the band’s wont, it’s all done in one take, and is sure to drop your jaw. Ok, go!

Let’s get a geek thing or two out of the way. This was shot in one take which means it was shot with a drone. That’s way cool – there obviously is sufficient stability, control and capability to produce what you see before you. Every choreographer and cinematographer must be playing with drones, by now.

Next – Honda gets better every minute of the day at building-in stability to inherently unstable mechanisms. Especially robot attendants for not-very-mobile senior citizens. All the other uses for one-person mobility over moderate distances are counter-productive to human health – in my mind.

Yes, I’ve worked in facilities that used electric vehicles when speed was an important component of getting from one part of a sprawling facility to another. Working in a major teaching hospital with buildings connected by tunnels for unimpeded traffic, techs who needed a load of equipment for their work utilized electric tricycle go-carts to get from engineering central to the job. And when a code was broadcast on the hospital public intercom for “smell of smoke” – everyone in engineering stopped whatever they were doing and walked briskly or hopped onto the nearest electric cart and went immediately to the designated point of danger.

We were the first line of defense against a hospital fire. Carts would arrive with two or three or four techs, anyone trained to stop a fire, hanging onto the top of the carts.

Otherwise – especially in comparable industrial facilities – if you had a half-mile or more between jobs/meetings you took a single-speed bike and got a little exercise along the way. Or you walked. Both better for your health than arabesques with Japanese schoolgirls.

As more states legalize medical marijuana, there’s one stage in the process nobody wants to talk about: the part where people still have to break the law.

After growers obtain licenses, plan for security and build facilities, they then must obtain their first seeds or cuttings — while regulators turn a blind eye…

The situation is known as the “immaculate conception” or the “first seed” problem. Those involved see it as an absurd consequence of the nation’s patchwork of laws, with 23 states allowing medical marijuana sales, Colorado and Washington state allowing recreational use and a federal prohibition in place.

While marijuana may not be hard to find, getting the first seeds for medical operations often involves either descending into the underground market or crossing state lines — a violation of state and federal laws.

One Colorado grower, Toni Fox, says she ordered her first seeds for a medical crop five years ago from advertisers in High Times magazine. If they showed up at all, they came hidden in packages with T-shirts and coffee mugs…

Most state laws are silent on the issue, forcing officials into a “don’t ask, don’t tell” stance. In Washington state, growers have a 15-day, no-questions-asked period during which they can bring non-flowering plants into their operation, which must then be bar-coded and registered.

The result of both citizens and government in this land willing to accept fear of science as a standard, irrational and contradictory law as a replacement for responsible government. Between States Rights, bible-thumping political campaigns, legislative bodies composed of cowards and con artists – we’re all screwed.

And, of course, some folks think that’s pre-ordained and OK.