In 2012, the Supreme Court ruled that a cornerstone of the Affordable Care Act — its expansion of Medicaid to low-income people around the country — must be optional for states. But what if it had ruled differently?

More than three million people, many of them across the South, would now have health insurance through Medicaid, according to an Upshot analysis of data from Enroll America and Civis Analytics. The uninsured rate would be two percentage points lower.

Today, the odds of having health insurance are much lower for people living in Tennessee than in neighboring Kentucky, for example, and lower in Texas than in Arkansas. Sharp differences are seen outside the South, too. Maine, which didn’t expand Medicaid, has many more residents without insurance than neighboring New Hampshire. In a hypothetical world with a different Supreme Court ruling, those differences would be smoothed out.

And that was the idea behind the Affordable Care Act. Before the law passed in 2010, the country had a highly regional approach to health policy and widely disparate results in both health insurance status and measures of public health. One of the main goals of the law was to provide some national standards and reduce those inequities by using federal dollars to buy coverage for low-income people in every state.

That’s the Republicans as bitter as they were a few days ago. The conservative fops on SCOTUS, the guardians of all that reactionary politics can provide to screw working people — are taking another shot at the ACA: 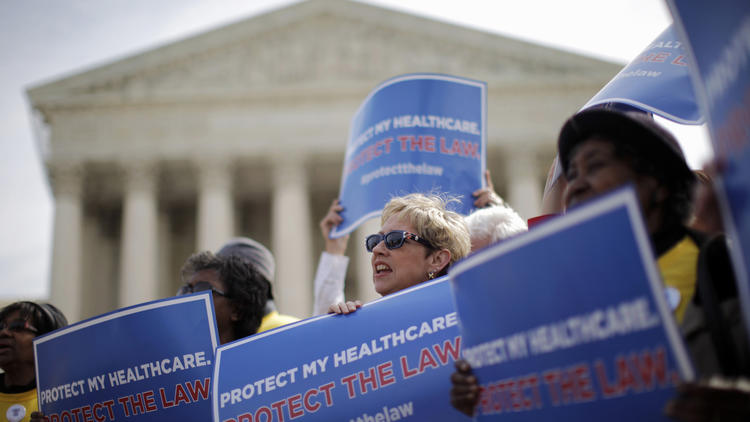 How many times can Obamacare cheat death at the Supreme Court?

The justices announced Friday that they will take up the case of King v. Burwell, which challenges the Obama administration’s decision to make insurance subsidies available to low- and moderate-income Americans in all 50 states. If the plaintiffs prevail, subsidies will be cut off for residents in the states that did not set up their own insurance-buying exchanges.

Such a ruling could be catastrophic to the 2010 Patient Protection and Affordable Care Act. Not only would it render insurance unaffordable to millions of Americans in 34 states that didn’t establish exchanges, it would exempt large employers in those states from the mandate to provide affordable coverage to their full-time workers…

Still, in a rational world, Congress would have amended the law already to remove any ambiguity about its intention to make federal subsidies available in every state. But that wasn’t a possibility, and won’t be going forward, as long as Republicans oppose any change to the ACA that could reduce the chances of repealing it someday.

Anyone out there who thinks Congress is part of a rational world? The Great Spirit of Stupid speaks in tongues to folks who think electing more Republicans to Congress will improve life for more Americans.

If SCOTUS conservatives side with fools inveigled to sue on behalf of a world view which makes insurance companies the real kings…kickbacks to Republicans are guaranteed for best filling the usual 2-party role of court jester and pimp.