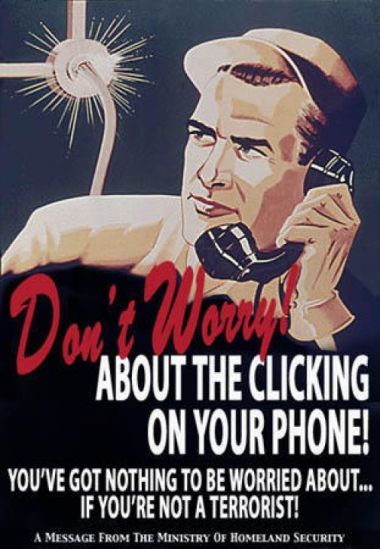 An agency of the U.S. Justice Department is gathering data from thousands of cell phones, including both criminal suspects and innocent Americans, by using fake communications towers on airplanes, the Wall Street Journal reported on Thursday.

The program run by the U.S. Marshals Service began operations in 2007 and uses Cessna planes flying from at least five major airports and covering most of the U.S. population, the newspaper said…

The planes use devices made by Boeing Co that mimic the cell phone towers used by major telecommunications companies and trick mobile phones into revealing their unique registration data, the report said.

The devices, nicknamed “dirtboxes,” can collect information from tens of thousands of cell phones in a single flight, which occur on a regular basis…

The program is similar to one used by the National Security Agency which collects the phone records of millions of Americans in order to find a single person or a handful of people.

It smells just as bad.

The Journal quoted Christopher Soghoian, chief technologist at the American Civil Liberties Union, as calling it “a dragnet surveillance program. It’s inexcusable and it’s likely, to the extent judges are authorizing it, they have no idea of the scale of it.”

The program stinks on ice.

Even if tame judges authorize fishing expeditions involving everyone’s phones – that doesn’t make the procedure any less of an invasion of privacy. Whether authorizing the NSA or US Marshals Service it is simply one more instance of our government corrupting the constitutional standing of our individual rights.

The excuses are the same as ever. Still invalid. Still contemptible.

The U.S. Department of Energy, led by Secretary Ernie Moniz, is trying to change how people perceive its loan program, which doled out over $30 billion in loans over the years, funding clean energy projects like huge solar panel farms, but also now-bankrupt solar startup Solyndra. Why? Because the Department has another $40 billion left to hand out in the program, and of course it wants that process to go as smoothly as possible.

Moniz and DOE officials said in interviews Thursday morning that the loan program is now starting to make a small profit ($30 million from interest payments), and eventually the program could bring in between $5 billion and $6 billion over 20 years.

Not that realities of government research and kickstarter programs are anything conservative pundits and politicians will ever admit to being useful.

The program wasn’t designed to make money, and it actually had $10 billion set aside to cover losses. The loss rate on the first $30 billion was only 2.28 percent, or $780 million, of which $535 million was for Solyndra, and some of the rest from Fisker. Abound Solar and Vehicle Production Group were also small losses. Now interest payments have covered all of those losses and brought it into the black…

For example, the DOE loan program funded a number of large solar panel farms that couldn’t get debt financing with its first $30 billion about five years ago, Moniz pointed out last month. But now that solar panel farm development has come down in price substantially, and private funding has become readily available, the private sector has taken over this type of investment and the DOE has moved on. This is the type of model that works for the DOE, said Moniz. But of course bringing newly commercial technologies to market can be risky…

With the…news that the original loan program is actually profitable, it will be interesting to hear from all those critics who used Solyndra as a political talking point, including in the last presidential election. Is the ghost of Solyndra finally dead? If the money’s been covered by interest payments, it seems as if it should be.

I think Katie Fehrenbacher has a cynical streak in her DNA at least as persistent as mine. After all, she earns her living writing about cleantech, clean energy and the struggle to develop national policy based on science and humanity. None of which are topics of interest to Republicans, Blue Dog Democrats or the sort of cretin who hasn’t embraced a new economic or social idea since the designated hitter was allowed in half of baseball.

But, I appreciate her optimism. Even if it presumes courage and understanding I consider scarce.

Rosetta selfie with Comet 67/P in the background

History was made yesterday as a spacecraft the size of a fridge executed the first successful landing on a comet. The European Space Agency confirms that at about 16:00 GMT the unmanned Philae space probe touched down on the surface of comet 67P/Churyumov-Gerasimenko at the landing site known as Agilkia. The comet and spacecraft are 510 million km from Earth, so the news of the landing took 28 minutes and 20 seconds to reach mission control in Darmstadt, Germany.

The day before the landing, the 100 kg Phiale was turned on and its batteries charged for the first time since leaving Earth. There were some initial glitches as the batteries warmed more slowly than anticipated, but the spacecraft soon warmed up to its operational temperature. As the Rosetta mothership carrying Philae maneuvered into position, mission control carried out flight checks on the two spacecraft, sent command updates to Philae that allowed it to navigate autonomously to the landing site, and cleared the landing maneuver after a series of go/no decisions with the lander declared ready for separation at 02:35 GMT.

Despite a transient fault in the cold gas thruster aboard Philae, at 07:35 GMT Rosetta completed its final maneuver and the final permission was given to proceed with landing. At 09:03 Philae separated from Rosetta. During course correction maneuvers, communications with Earth were interrupted from either spacecraft, so they were programmed to operate autonomously…

…Since its arrival on August 6, the orbiter has been mapping the comet in search of a suitable landing site for the Philae lander.

…The landing…was based on a window where there would be enough sunlight to power the lander, but not so much as to make the comet dangerously active. Meanwhile, the site was chosen based on a balance between the scientific value of the area against the safety of the lander. Agilkia has very little slope, few boulders, and abundant sunlight, yet contains many features of interest.

ESA says that Philae has begun taking panoramic images as part of a two-and-a-half day science mission using its suite of 10 instruments, which could be extended if its solar panels are able to charge its batteries.

Bravo. Kudos to ESA for having the foresight and dedication to basic science and research required to fund and manage this project.

Click through to the article and more than 2 dozen photos from the history of the Rosetta project. 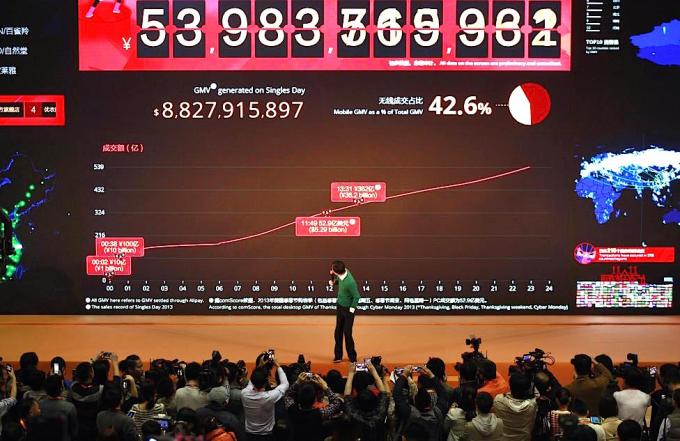 Click to enlarge
Alibaba Group Executive Chairman Jack Ma looks back at a giant electronic screen showing real-time sales figures of the company’s Taobao.com and Tmall.com, on the “Singles’ Day” online shopping festival, at the company headquarters in Hangzhou, China.

Watching the sidebar on Bloomberg TV, they reported over $9.3 billion in the 24-hour sale. The first billion$ took 12 minutes. During peak hours, Alibaba was processing 19,000 sales per second.