Joseph Burrell was arrested on two felony counts of drug possession on November 14, 2014. According to police, Burrell was initially stopped for driving out of a grocery store parking lot without his lights on. When police searched his vehicle, they found a bag containing powder that a field test determined could be an amphetamine.

Burrell — who acknowledged that he had used drugs in the past, but that he had also just finished in-patient treatment at the New Beginnings drug treatment center in nearby Waverly — insisted that the substance was not illegal, and that he had purchased it to deal with a chronically sore shoulder.

Prosecutors pressured him to plead guilty, but Burrell told the Free Press that he “couldn’t plead guilty [to possessing] something I knew wasn’t a drug. They set my bail at $250,000 for vitamins.”

The charges were dropped after prosecutors used a more sophisticated means of analyzing the powder and discovered that it did, in fact, consist of legally available vitamins.

“I had been sitting in the jail since November with my bail set at $250,000,” Burrell told the Free Press. “Then, two days before trial, they dropped the charges and let me go.”

Accurate field tests, a timely trial, reasonable bail – seems to me I read somewhere these are all part of how a modern police department, justice system, function.

Is that too difficult for Minnesota to comprehend?

Of course, it reminds me of the time I was busted by customs coppers at Prestwick Airport in Scotland. About to be charged for the white powder in a plastic bag in my backpack, I finally convinced the most obstreperous of the lot to snort just the tiniest bit to test for any narcotic effects.

When little bubbles popped out of his nose he finally admitted I was telling the truth when I said it was Woolite! While his mates rolled on the floor laughing.

The U.S. National Security Agency has figured out how to hide spying software deep within hard drives made by Western Digital, Seagate, Toshiba and other top manufacturers, giving the agency the means to eavesdrop on the majority of the world’s computers…

That long-sought and closely guarded ability was part of a cluster of spying programs discovered by Kaspersky Lab, the Moscow-based security software maker that has exposed a series of Western cyberespionage operations.

The firm declined to publicly name the country behind the spying campaign, but said it was closely linked to Stuxnet, the NSA-led cyberweapon that was used to attack Iran’s uranium enrichment facility. The NSA is the agency responsible for gathering electronic intelligence on behalf of the United States.

A former NSA employee told Reuters that Kaspersky’s analysis was correct, and that people still in the intelligence agency valued these spying programs as highly as Stuxnet. Another former intelligence operative confirmed that the NSA had developed the prized technique of concealing spyware in hard drives, but said he did not know which spy efforts relied on it.

Kaspersky published the technical details of its research on Monday, which should help infected institutions detect the spying programs, some of which trace back as far as 2001.

Another opportunity to confirm which politicians and pundits are serious about protecting individual privacy and which consider kissing government spy-butts more important. Let’s see who lines up on which side in coming days discussing this latest revelation.

Meanwhile, our government will continue to tell us the biggest cyber-dangers are script-kiddies dwnloading movies and crooks raiding ATMs. Just ignore wholesale spying on everyone on the planet who owns a computer or a cellphone.

If the NSA gets their way, the Internet of Everything will have your refrigerator telling American spy agencies what you plan to have for lunch.

Apple’s landmark solar power deal…is a long-term sustainable energy solution that should generate enough to power essentially all of the company’s California operations, including the upcoming “spaceship” Campus 2, by the end of 2016.

The green energy will be purchased from First Solar, Inc., through an $848 million agreement that will last for at least 25 years, making it the largest of its kind in the industry. First Solar will be providing electricity through its forthcoming 2,900-acre California Flats Solar Project in Monterey County…

In total, the solar plant will output 280 megawatts of electricity, 130 megawatts of which will be bought by Apple. The remaining 150-megawatt capacity will be sold to Pacific Gas & Electric under a separate long-term power purchase agreement…

Cook said…that Apple will buy enough electricity to power nearly 60,000 California homes. That’s enough to offset the electricity used by Apple’s upcoming Campus 2, as well as all 52 Apple retail stores in the Golden State, and its data center in Newark.

The Apple CEO also made it clear that climate change is a very serious issue for him and his company, which is why they are taking the lead on renewable and sustainable energy. Cook also noted to investors that the agreement makes sound financial sense as well, as the $848 million deal will result in “very significant savings” on the cost of energy.

So, the most valuable corporation in the world says it makes economic sense to move eletricity generation away from fossil fuel, away from coal and oil.

Which side are you on? 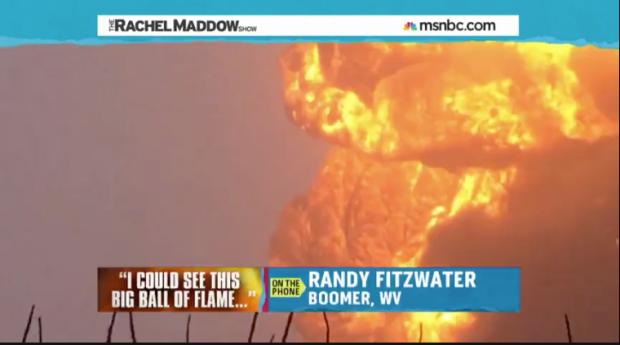 A train derailment Monday afternoon in West Virginia caused multiple explosions and a massive fire, and the CSX-owned train is leaking crude oil into the Kanawha River…

Nearly three hours after that declaration, the fire was still burning, and 1,000 people had been evacuated, according to Lawrence Messina, the state’s public safety spokesman…

At least one home near the derailment in Fayette County caught fire and was destroyed, Messina said.

The derailment happened about 1:20 p.m. Eastern time as the 109-car train carrying Bakken crude oil was going from North Dakota to Yorktown, Va., Messina said. As many as 15 train cars were involved in the derailment and fire…

Crude oil from at least one of the rail cars is leaking into the Kanawha River, Messina said.

The plant will not be reopened until it is confirmed the water is safe, it said.

“Oil creates the illusion of a completely changed life, life without work, life for free. Oil is a resource that anaesthetises thought, blurs vision, corrupts.”