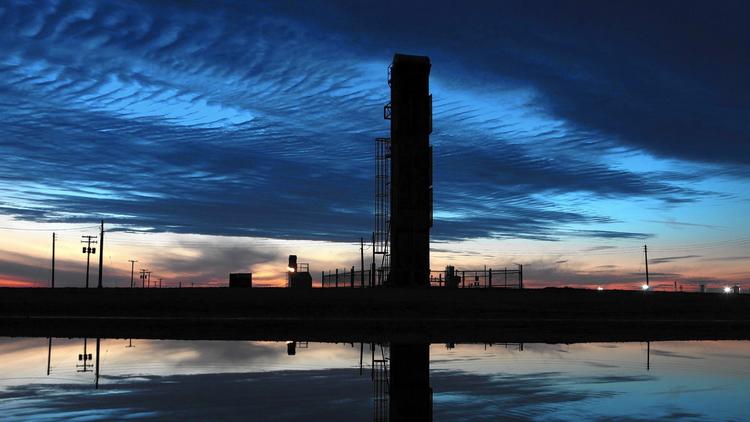 Hoping to better understand the health effects of oil fracking, the state in 2013 ordered oil companies to test the chemical-laden waste water extracted from wells.

Data culled from the first year of those tests found significant concentrations of the human carcinogen benzene in this so-called “flowback fluid.” In some cases, the fracking waste liquid, which is frequently reinjected into groundwater, contained benzene levels thousands of times greater than state and federal agencies consider safe.

The testing results from hundreds of wells showed, on average, benzene levels 700 times higher than federal standards allow, according to a Times analysis of the state data.

Read it and weep, folks. Shocking, I say – shocking.

Except I’m not shocked. BITD, I worked in and around oil fields in Louisiana and there is no other class of business [in my experience] that spends 24 hours a day looking for ways to circumvent regulations. Especially requirements for environmental health and safety.

The article is the sort of thing LA Times journalists are thorough about. They don’t skimp on excellence. And, no, I don’t think the Feds have any right to be shocked. They should have been watching these sharks like tuna on toast.

Four years ago, Michele Bachmann slammed Rick Perry—then the governor of Texas—for his executive order mandating HPV vaccinations. “I’m a mom of three children,” Bachmann said during a GOP presidential debate. “And to have innocent little 12-year-old girls be forced to have a government injection through an executive order is just flat out wrong.”

Bachmann, who at the time was a Republican congresswoman from Minnesota, expanded on her allegations the next day. “I will tell you that I had a mother last night come up to me here in Tampa, Fla., after the debate,” she said on the Today show. “She told me that her little daughter took that vaccine, that injection, and she suffered from mental retardation thereafter. It can have very dangerous side effects.”

Bachmann’s suggestion that the HPV vaccine is dangerous was completely false. “There is absolutely no scientific validity to this statement,” explained the American Academy of Pediatrics…

Enter Kathleen Hall Jamieson, the director of the Annenberg Public Policy Center at the University of Pennsylvania, which operates the nonpartisan Factcheck.org. Founded in 2003, Factcheck was one of the first websites devoted to refuting misleading assertions about US politics. Last month, Factcheck launched Scicheck, a new project that evaluates the scientific claims made by politicians. In just a few weeks, Scicheck has countered inaccurate statements about issues ranging from climate change to the economic impact of the Human Genome Project.

On this weeks’ episode of the Inquiring Minds podcast, I asked Jamieson what inspired her organization to focus on scientific issues. She credits Bachmann.

“When Michele Bachmann in the last election made an allegation about the effects of…a vaccine, in public space on national television…the journalists in the real context didn’t know how to respond to the statement as clearly as they ought to,” explains Jamieson. “The time to contextualize is immediately. That should have been shot down immediately…”

That just may be counting on the ignorant to counter the stupid.

But Jamieson is keenly aware that it isn’t enough to simply rebut inaccurate claims in real time. One of the key challenges facing science communication is that voters frequently get their news from highly ideological media outlets that sometimes misrepresent the scientific consensus on controversial issues. This has contributed to substantial gaps between what the general public thinks and what scientists think on a wide range of issues, from evolution to the safety of genetically modified foods.

I love showing crap statements from idjits like Bachmann to friends and family who are Recovering Republicans. Just to remind them why they left the Party.

Yes, I can remember when educated conservatives had a role and a voice in both of the two parties we’re allowed. That’s because I’m very old cranky geek.

LucidPipe installation — a turbine visible inside the pipe

There’s a lot of water constantly moving through the municipal pipelines of most major cities. While the water itself is already destined for various uses, why not harness its flow to produce hydroelectric power? Well, that’s exactly what Lucid Energy’s LucidPipe Power System does, and Portland, Oregon has just become the latest city to adopt it.

LucidPipe simply replaces a stretch of existing gravity-fed conventional pipeline, that’s used for transporting potable water. As the water flows through, it spins four 42-inch (107-cm) turbines, each one of which is hooked up to a generator on the outside of the pipe. The presence of the turbines reportedly doesn’t slow the water’s flow rate significantly, so there’s virtually no impact on pipeline efficiency.

Once up and running, it’s expected to generate an average of 1,100 megawatt hours of energy per year, which is enough to power approximately 150 homes. Over the next 20 years, it should also generate about US$2 million in energy sales to Portland General Electric, which Harbourton plans on sharing with the City of Portland and the Portland Water Bureau in order to offset operational costs. At the end of that period, the Portland Water Bureau will have the right to purchase the system outright, along with all the energy it produces.

Of course, rebuilding infrastructure – especially with an eye on future requirements and additions – ain’t exactly part of being an American politician, nowadays.