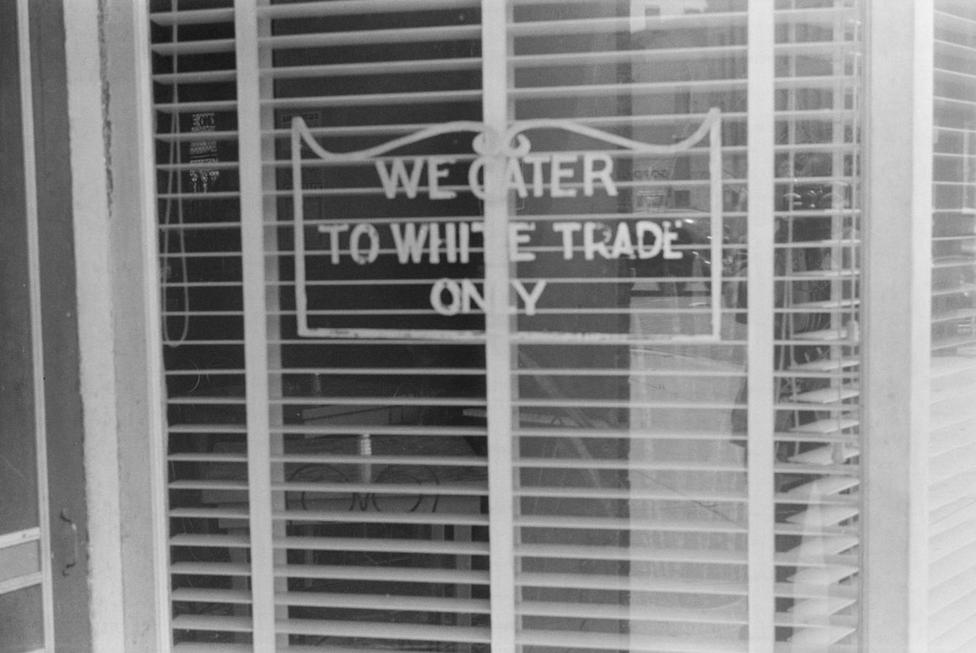 A sign on a restaurant in Lancaster, Ohio, in the old days

Remembering Selma, this weekend, Reuters offers a slideshow of background photos — and traces the course of some of the events in the civil rights struggle up to Dr. King’s assassination in 1968.

I chose the restaurant window up top just to remind folks that as craptastic as Confederate ideology has been in the Deep South, the disease of racism doesn’t skip any part of this nation. As you might expect, all the rationales of denying any segment of the population their civil rights extends easily and automatically to anyone else hated by bigots.

So, we’re still awaiting a dysfunctional politically-warped Supreme Court to decide if the 21st Century is too scary if folks who aren’t heterosexual want to live the American Dream. And I always take the time to remind my fellow trade unionists that the union I belonged to in the 1960’s – one of the largest in the country at the time – still had a clause in its constitution banning the president of the national union from being a woman or Black.

Oh, anyone surprised the Republican Party essentially is skipping commemorations in Selma, this weekend? The Sad Old Party has given up on joining any fight for civil rights. Not today’s Republican Party.

A marketing company known for its Snuggie infomercials settled state and federal claims that it stuck consumers with hidden charges that almost doubled the cost of the product, a blanket with sleeves…

There was no finding that the company broke any laws, Allstar said in a statement. The company said it will provide “multiple opportunities for customers to confirm their orders before placing them” and will “clarify ordering and return procedures…”

Marketers must clearly disclose all costs, including processing and handling fees, said Jessica Rich, director of the FTC’s Bureau of Consumer Protection.

IMHO, what these scumbags are guilty of is behavior pretty the norm for a lot of the crap I see being sold to folks as “exclusive” and “seen only on TV”. When you’re not being hustled by hidden charges, you often run the risk of outright lies and myths worthy of a SuperPAC campaign commercial.

A BNSF Railway train loaded with crude oil derailed and caught fire on Thursday afternoon in a rural area south of Galena, Illinois, according to local officials and the company.

The incident marks the latest in a series of derailments in North America and the third in three weeks involving trains hauling crude oil, which has put a heightened focus on rail safety.

Dark smoke was seen for miles around the crash site, and the Illinois Environmental Protection Agency told local WREX.com that two of the cars were potentially on fire. Images posted online by Dubuque Scanner showed flames several hundred feet high, while aerial footage showed the wreck spread across two sets of track.

The train with 105 loaded cars – 103 of them carrying crude oil – derailed around 1:20 p.m. CST (1920 GMT), according to a BNSF statement. The incident occurred on what appears to be a major rail line alongside the Mississippi River that handles as many as 50 oil-trains a week…

It was also not immediately clear where the train originated or where it was heading. Chicago, which is 160 miles east, is a major rail hub for shipments from both North Dakota and Canada’s oil sands. It was unclear if the train’s tank cars were older models widely criticized for being prone to puncture during accidents.

About 40 to 50 oil trains come through the area each week…The accident is just the latest involving oil trains in the United States and Canada.

State and federal bureaucrats are predictable as ever. Everything is under control. Which means no one was killed, this time.

That’s probably what it will take to get qualitative change in safety requirements – for the rail cars, train speeds vs. quality of roadbed and rail standards. Face it, folks. Most of these systems haven’t been upgraded in a half-century. After John Wayne and Walt Disney finished winning World War 2 – our government was so thoroughly owned by the Detroit auto industry and fossil fuel producers that consideration of upgrading rail transit for people and products was a non-starter.

People forget we had a cabinet officer named Charles Wilson, former CEO of GM who famously said, “what was good for our country was good for General Motors – and vice versa”.

In the teeming capital of Democratic Republic of Congo, where drivers often flout traffic rules, five chunky, arm-waving robots equipped with cameras and lights have been set up to watch over the roads.

The solar-powered aluminium robots are huge, towering over the jammed streets of Kinshasa, as cars and motorcyles jostle for road room, their horns blasting.

Each hand on the odd-looking machines – built to withstand the year-round hot climate – is fitted with green and red lights that regulate the flow of traffic in the sprawling city of nine million.

The robots are also equipped with rotating chests and surveillance cameras that record the flow of traffic and send real-time images to the police station.

Don’t mess with these coppers!