Get used to this one till the election in 2016. Americans with more than half a brain will ignore it, anyway. 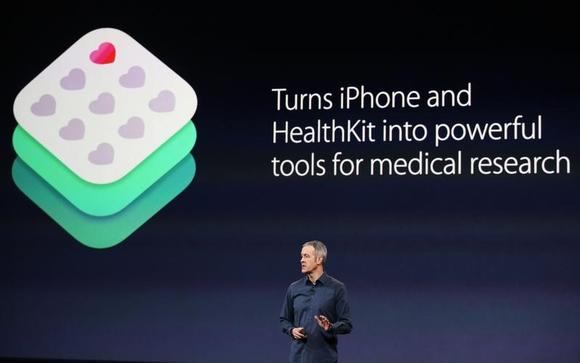 Apple just released ResearchKit, an open-source software tool designed to give scientists a new way to gather information on patients by using their iPhones.

The ResearchKit platform is designed to work hand in hand with Apple’s HealthKit software, which allows iPhones to work with health and fitness apps that gather information on weight, blood pressure, glucose levels and asthma inhaler use.

The ResearchKit also allows researchers access to accelerometer, microphone, gyroscope and GPS sensors in the iPhone to gain insight into a patient’s gait, motor impairment, fitness, speech and memory.

The software is also designed to help researchers build more diverse study populations, which traditionally have been limited by physical proximity to large academic medical centres.

My wife teases me – calls me her personal emoticon. And I admit I cried a little when Tim Cook and Jeff Williams were introducing ResearchKit.

The primary cause of my mom’s death was Parkinson’s. She devoted a lot of her life to the American Heart Association. I’ve done some similar things; but, the best was being able to volunteer as a human test subject for one ailment that, right now, still affects millions of people. Shingles. My mom suffered through some painful episodes and it pleased me much to be in the final test cycle of the Shingles vaccine before it was approved.

That was a big deal because it included several thousand volunteers nationwide. With ResearchKit, computational analysis of everything from day-by-day, minute-by-minute tracking of symptoms, response, exercise, a great deal of information previously only available from small groups, narrow demographics – can now be collated from millions of volunteers.

Doctors, researchers, universities worldwide can develop apps to fit their particular needs. And you decide what you wish to participate in – if at all.

You decide whether or not you are anonymous. You decide the boundaries for your participation. Apple sees none of the information. It’s all up to you.

Tim Cook and the designers at Apple feel the potential for this concept is so important — they’re making the SDK open source and developers can proceed on any platform they wish. You won’t have to own Apple products to participate.

All power to the people!

Creating a new 118-km rail route with 10 new stations and 42 km of new tunnels is no mean feat. The logistics of doing so in one of the world’s major cities, however, are staggering. That is the task for the UK’s Crossrail line. Major tunneling ends in May, so Gizmag went to take a look…

Work on Crossrail began in 2009 and the route is expected to start operating in 2018. Once completed, it will link Reading and Heathrow to the west of London with Shenfield and Abbey Wood to the east. The route goes directly through Central London, meaning that not only is it a huge undertaking, but one that is incredibly complex.

The facts and figures about Crossrail are mind-boggling. Over 10,000 people are employed across 40 construction sites. It is expected to increase rail capacity in London by 10 percent in a stroke, and will bring 1.5 million more people to within 45 minutes of the city’s major employment areas. Over 6 million tonnes (6.6 million tons) of excavated material will be removed to create tunnels at depths of up to 40 meters.

The list goes on, but perhaps the most remarkable aspect of the project is the tunneling itself. Not only must miles of new tunnels be created underneath London, but they must be created without disturbing the ground and buildings above, and avoid the subterranean tangle of existing tunnels, cables, sewers and so on…

The Crossrail tunneling has been being carried out using a total of eight tunnel-boring machines…Each machine is 150 m long and weighs 1,000 tonnes…They burrow an average of 100 m per week, with one machine setting the record of 259 m in a week. The clay and rubble excavated by the machines is transported out of the tunnel on a conveyor belt fed out behind them.

As they bore through the ground, the TBMs lay preformed concrete segments around the inside of the newly-dug tunnels. These form “running tunnels” that the future trains will run through. To create the much larger platform tunnels from where passengers will board trains the concrete segments are then removed so that the tunnels can be widened. The sides are then sprayed with a concrete mixture called “shotcrete” that contains steel fibres…A “shutter machine” then moves along the tunnel adding a final concrete lining…

Once Crossrail’s tunneling work comes to an end, much of the focus will move on to installing and setting up the required railway systems, as well as building and fitting out stations.

Something like this has to dazzle Americans. Excepting a few cities and states with the buck$ and determination to move beyond the constraints of American politics, there isn’t any consideration of taking on projects like this. Our politicians haven’t the backbone or economic good sense to repair and maintain the infrastructure we have – much less step towards the future.

A prototype toilet has been launched on a UK university campus to prove that urine can generate electricity, and show its potential for helping to light cubicles in international refugee camps.

Students and staff at the Bristol-based University of the West of England are being asked to use the working urinal to feed microbial fuel cell (MFC) stacks that generate electricity to power indoor lighting.

The project is the result of a partnership between researchers at the university and Oxfam, who hope the technology can be developed by aid agencies on a larger scale to bring light to refugee camp toilets in disaster zones…

The technology uses microbes which feed on urine for their own growth and maintenance…The urinal – conveniently located near the Student Union bar – resembles toilets used in refugee camps to make the trial as realistic as possible. The equipment that converts the urine into power sits underneath the urinal and can be viewed through a clear screen…

An estimated 6.4 trillion litres of urine is produced by humans across the globe every year, so researchers believe it has great potential as a cheap and readily available source of energy. Ieropoulos said the unit installed at the university would cost around £600 to set up.

There is a seemingly endless number of sources of so-called waste our culture of capitalist profit, first and foremost – ignores.