Let in a little winter air?

The Dutch government has ordered a further tightening of gas production at Groningen, Europe’s largest gas field, in response to a spate of earthquakes that have caused extensive property damage in the Netherlands’ northernmost province.

Output at the field, the world’s 10th largest, will be capped at 30 billion cubic metres (bcm) for the whole of 2015, Economy Minister Henk Kamp told reporters on Tuesday. At the beginning of the year, production of 39.4 bcm was planned.

“The earthquakes are still there, and we will have to reckon with earthquakes in the future,” Kamp later told Reuters. “We can do two things to preserve safety: reduce the production of natural gas and strengthen houses, and we’re doing both.”…

Which tells us something about the size of profits – and how priorities are sorted. Even though Kamp says, “We’ll do whatever is necessary for the safety of the people in Groningen.”

In February, output was cut to 16.5 bcm for the first half of the year after the Dutch Safety Board said gas companies and state regulators had failed to take the threat of earthquakes seriously enough.

In the second half of the year, output will be capped at 13.5 bcm, with stored gas tapped if necessary to make up for any shortfall…

Analyst Oliver Sanderson of Thomson Reuters Point Carbon said reaction to the planned reduction had been relatively muted because it was announced in June, during the summer…

“Last time there was a cold winter, two years ago, Groningen was producing at around 54 bcm,” he said…”Where is Europe going to get 25 bcm?”

He said that with Groningen producing at 30 bcm in a cold winter, the shortfall in Western Europe would have to be met mostly with Russian gas, supplemented with some Norwegian gas and liquefied natural gas imported by tanker.

“Try selling that in Brussels,” he said, referring to the political sensitivity of European governments increasing, rather than lessening, their reliance on Russian energy.

Sometimes, circumstances make it a little easier to understand some nations keeping commercial and trade policies separate from the latest political conflicts.

Same-sex marriage is now legal throughout the USA. This is a good thing, it’s always nice when people get equal treatment under the law. Sadly, not everyone agrees. Such is the speed of modern news and communication that announcement of the Supreme Court decision was essentially immediately followed by furious objections and doom-laden predictions of the collapse of society for various reasons.

It’s easy to dismiss these objections as angry incoherent bitterness from people who can’t or won’t accept that the rest of the human race doesn’t have to conform to their antiquated views, and many people do just that. But what if they’re not? What if there are genuine scientific reasons to fear same-sex marriage? After all, we in the UK know that same-sex marriage caused extreme flooding when it was legalised here, and now that it’s permitted in a country with the size and influence of the USA the consequences could be even more catastrophic. Here are just some possibilities we should brace ourselves for.

The overturning of nature

Governor Mike Huckabee pointed out that for the Supreme Court to legalise same-sex marriage is to overturn nature, which is impossible…

However, same-sex marriage is now legal, so clearly it is possible for humans to overturn nature. This opens up a wide variety of problems, given how nature is responsible for everything that keeps the planet running. Clearly LGBT people have the power to overrule nature to suit their own needs. While we can hope they restrict this ability to things like increasing the number of rainbows, there’s no guarantee of this. What if some careless homosexual is struggling with a heavy suitcase and decides to lower the mass of the planet to reduce the strength of gravity? We’d all be flung out of the atmosphere without warning…

As already hinted at, the celebrations of the legalisation of same-sex marriage have resulted in a stark increase in the number of rainbows seen everywhere. The rainbow is the symbol of the LGBT movement, so this makes sense. No harm in rainbows, right?

Wrong! It may seem like harmless celebration to put rainbows in every possible location, but what about the effect this is having on the eyes of those who have to look at them? The retina in the eye relies on photoreceptors, specialised cells that detect light. Because they’re organic and rely on biological processes, these photoreceptors can become exhausted if exposed to a particular stimulus for too long. Constant exposure to rainbows could mean people can’t see colours as well, and this could be disastrous. How will they know when to stop or go at a traffic light? Or which wire to cut when defusing a bomb?

RTFA. Good for a chuckle. A witty rejoinder to the animal spirits of the ignorant. Read on and learn about The climate damage and The slippery slopes. 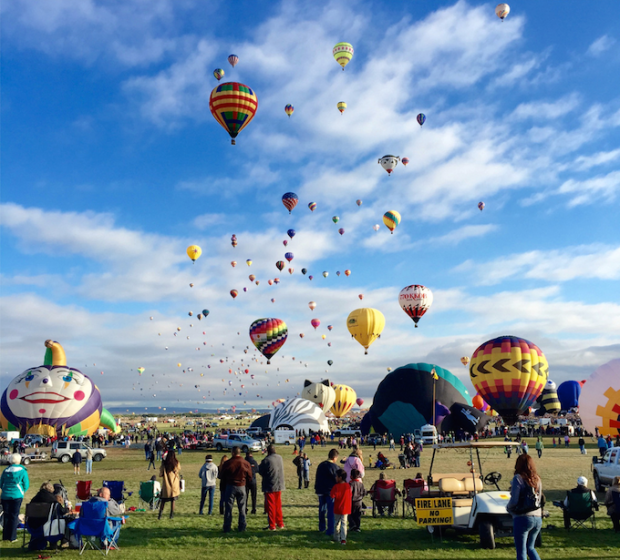 Apple’s World Gallery, part of the “Shot on iPhone 6” media blitz, was honored at this year’s Cannes Lions International Festival for Creativity with five Gold Lions and a Grand Prix award in the outdoor category.

World Gallery first showed up online in March as a collection of images taken by iPhone 6 users. While some images were captured by professionals in the photography field, many were shot by pro-am or amateur users. Earlier this month, Apple added a video section to the minisite, again featuring footage borrowed from iPhone 6 and 6 Plus owners.

I started noticing the video adverts showing up on TV in the last couple of weeks. Not only impressive work in most instances, I’m especially happy to see mostly amateurs receiving recognition.

There was a time, decades ago, that Kodak brought similar capabilities to hobbyist photographers. I’m delighted to see it happening again.

Anyone near the internet last Saturday was treated to one of most glorious cable news gaffes in recent memory. CNN thought it had a stunner of a scoop: Gay pride was being infiltrated by Islamist terror!

CNN anchor Suzanne Malveaux crossed from the US studios to international assignment editor Lucy Pawle in London, who claimed to have spotted an ISIS banner amongst the rainbow-adorned floats at London’s annual LGBT pride parade. A glorious exclusive!…Peter Bergen, the network’s national security analyst, was even called in for his sober assessment.

“The Pride festival is a pure celebration of the finest aspects of humanity: of tolerance, togetherness, acceptance and liberation, the polar opposite of what Isis stands for,” he continues. “If there was anywhere where my flag had a voice, it was there.”

Coombs also writes, “CNN correspondent Lucy Pawle described my flag as a ‘very bad mimicry’ but the only bad mimicry I could see was CNN’s impression of a reputable news organization. What does this say about every other report that they broadcast? And why have they not mentioned it since?”

Like most of the mediocre poseurs in the news-as-entertainment racket, CNN hates to admit publicly when they’ve screwed up. Truth doesn’t matter. Integrity is a foreign concept. Reality might interfere with their dreams of being world-leaders in distributing profitable claptrap.