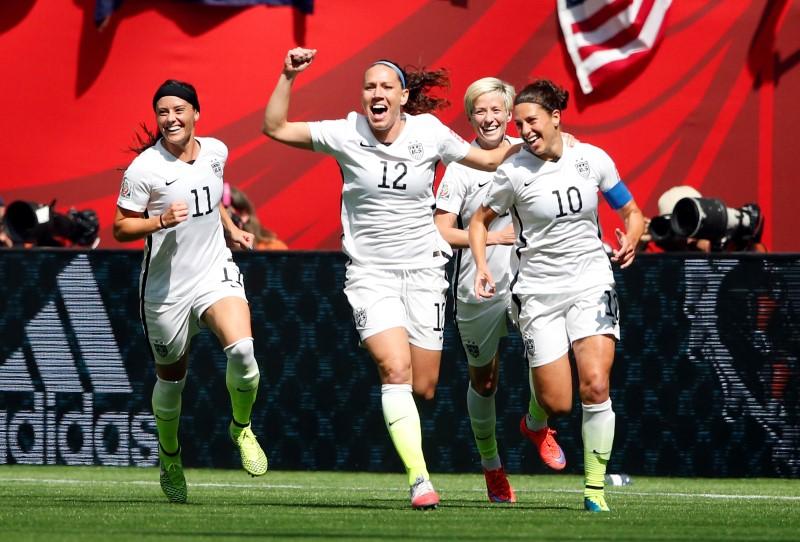 The United States won the Women’s World Cup for the third time, crushing Japan 5-2 on Sunday with striker Carli Lloyd scoring the tournament’s fastest ever hat-trick, including a spectacular goal from the half-way line.

The American captain struck three times inside 16 minutes as the U.S. stormed into an unexpected and unsurmountable 4-0 lead over their shell-shocked opponents.

Japan, winners four years ago, were utterly stunned as the U.S’s deadly finishing ensured they added to their 1991 and 1999 titles, and became the first nation to win the Cup three times…

And got her the Golden Ball for the tournament.

Japan restored a little bit of pride in the 27th minute when Yuki Ogimi turned Julie Johnston in the area and fired past Hope Solo to make it 4-1.

The Japanese have been widely praised for their short-passing game but it was an old-fashioned route that brought them, temporarily, back into the game early in the second half.

Aya Miyami’s long free-kick into the box was aimed at Sawa and Johnston rose for the ball but could only deflect a header past a helpless Solo.

The glimmer of hope flickered for just two minutes, however, when a U.S. corner fell to Morgan Brian beyond the far post and she did well to find Tobin Heath, who confidently fired home to make it 5-2 and effectively end Japan’s hope of a comeback.

Bravo! The US Women’s team proved their worth, demonstrated that a nation that still hasn’t grown to full participation in the world’s most popular sport can grow through school programs and amateur leagues to play at the best professional level.

The chuckle at the end is when Millen discusses his scant new record and reveals that he did the second half of the route on half-power.

In 1874, the U.S. Census Bureau published the Statistical Atlas of the United States. For the first time, essential information about who we were, where we lived and how we lived was available in the form of user-friendly U.S. census maps that could be accessed by all. The Bureau continued to publish atlases after each census until 1930, when the powers that be decided to cease production. In fact, no such atlas was produced again until 2007, when the Bureau published the Census Atlas of the United States, based on the results of the 2000 census. But with no plans in the works for an atlas based on the 2010 census (with only some U.S. census maps made available and hardly anyone else stepping up), one intrepid statistician, Dr. Nathan Yau of FlowingData, took matters into his own hands.

Yau’s elegant and endlessly fascinating homemade U.S. census maps, sport a design similar to those in the original atlas nearly 150 years ago. Some of these maps will, no doubt, confirm your assumptions (population density). Others will upend them (proportion of non-citizens). Others still will address issues about which you likely had no assumptions in the first place (cancer mortality). Some show how slowly the gears of history can move (population with French ancestry). Some show how fast the gears of history can move (English not spoken at home). And almost all show that, for whatever reason, Nevada is a major wild card.

Maps are fascinating. The best compress a great deal of information into a severely limited space. Some are ginormous. These arem’t very big; but, they are a delight. Worth studying to add to your knowledge of this cranky nation.

Which is probably why there are politicians who would rather these maps didn’t exist.

Dragon lizards, that is…

The researchers, who have long studied Australia’s bearded dragon lizards, have been able to show that a reptile’s sex determination process can switch rapidly from one determined by chromosomes to one determined by temperature.

Lead author Dr Clare Holleley, a postdoctoral research fellow at the University of Canberra’s Institute for Applied Ecology, explained: “We had previously been able to demonstrate in the lab that when exposed to extreme temperatures, genetically male dragons turned into females.”

“Now we have shown that these sex reversed individuals are fertile and that this is a natural occurring phenomenon.”…

University of Canberra Distinguished Professor Arthur Georges, senior author of the paper…highlighted the importance that these discoveries have in the broader context of sex determination evolution.

“The mechanisms that determine sex have a profound impact on the evolution and persistence of all sexually reproducing species,” Professor Georges said.

“The more we learn about them, the better-equipped we’ll be to predict evolutionary responses to climate change and the impact this can have on biodiversity globally.”

Imagine how quickly our Congressional do-nothings would get off their rusty-dustys if it was determined that just a fraction of the semi-literate, obedient, party lever voters in the hotter climes of this nation were being tweaked from male to female!

We’d have a nationwide policy of carbon-reduction before you could say Koch Brother seven times in a row.