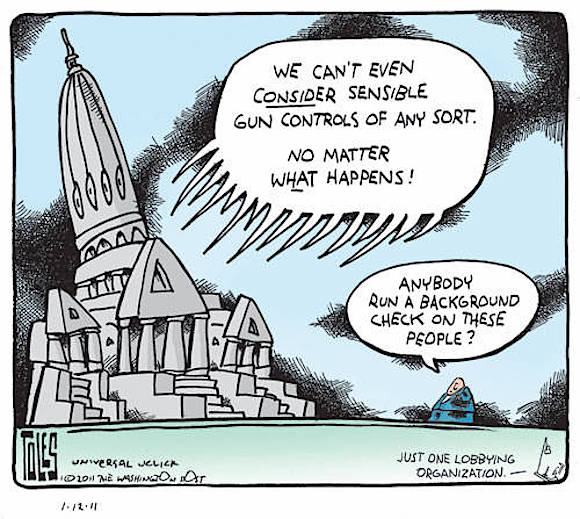 Citizens for Responsibility and Ethics in Washington requested the Internal Revenue Service open an examination into the finances of the National Rifle Association after the group failed to disclose more than $33.5 million it spent on political activity over six years. CREW also called on the Federal Election Commission to audit the NRA’s campaign arm, the NRA Political Victory Fund (NRA-PVF), and its lobbying arm, the NRA Institute for Legislative Action (NRA-ILA), after the group apparently violated federal election law by soliciting donations for the NRA-ILA that went instead to the NRA-PVF.

The NRA-ILA reported to the FEC nearly $11 million in independent expenditures and member communications expressly advocating election or defeat of candidates for federal office between 2008 and 2013, and disclosed on annual financial statements prepared by an independent auditor spending more than $22.5 million on fundraising and administrative expenses for its political action committee, NRA-PVF, during the same period. All of these expenditures were for political activities that needed to be reported on the organization’s tax filings but were not.

CREW also called on the FEC to audit the NRA-PVF and NRA-ILA because it appears these groups may have solicited donations in violation of federal election law by failing to disclose to donors that their money would be used for political purposes. The NRA also appears to have violated federal election law by soliciting donations from the general public, which it is prohibited from doing as a member organization, and by failing to disclose the employer and/or occupation of its contributors.

It’s always heartwarming to witness rightwing nutball organizations like the NRA ignoring essential transparency requirements while they blather about conspiracies against their pet demento issues. Perish the thought they actually live up to anything approaching ethical standards -0 like any normal business entity.

They set the standard for corruption even higher than Congressional Republicans.

3 thoughts on “Call for investigation of NRA fraud, political misuse of donations”