The Bumper V-2 was the first missile launched at Cape Canaveral on July 24, 1950. 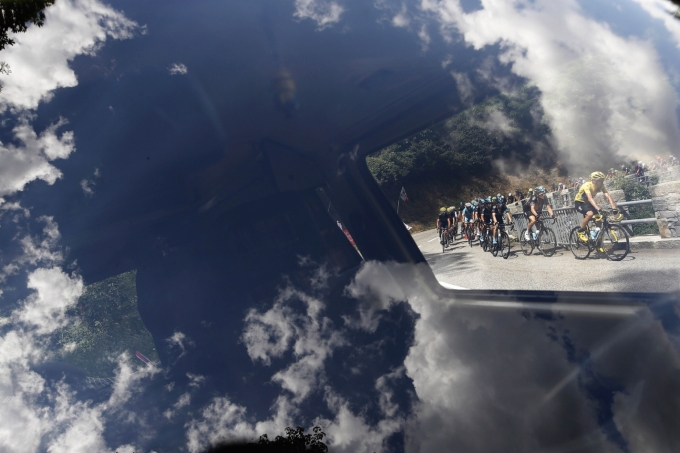 Clouds are reflected in a car window as Chris Froome, wearing the leader’s yellow jersey, leads the pack during the 19th stage of the Tour de France. Froome won his second Tour last week.

Patients continued to report that placebo drugs were working after being told they were not taking medications — but only if they had believed for long enough the placebo was working prior to being told, according to a new study.

Researchers said the new understanding of the placebo effect could lead to better ways to ease addiction and aid in pain management when dealing with stronger, more addictive drugs.

“We’re still learning a lot about the critical ingredients of placebo effects,” said Tor Wager, an associate professor…at the University of Colorado…”What we think now is that they require both belief in the power of the treatment and experiences that are consistent with those beliefs. Those experiences make the brain learn to respond to the treatment as a real event.”…

Schafer said the findings could lead to ways of weaning people off of drugs more easily and quickly, or not using the drugs at all.

“If a child has experience with a drug working, you could wean them off the drug, or switch that drug a placebo, and have them continue taking it,” Schafer said. “We know placebos induce the release of pain-relieving substances in the brain, but we don’t yet know whether this expectation-independent placebo effect is using the same or different systems.”

RTFA for details of the experiment/tests. The more we learn about our brain the smarter, sillier, more capable and unpredictable we seem. 🙂