The so-called ag-gag law, which passed in Idaho in 2014, is a sorry example of a special interest overreach that embraced the cries of lobbyists over First Amendment concerns and the state’s reputation as a transparent food producer.

That U.S. District Judge B. Lynn Winmill would rule it unconstitutional this week should come as no surprise to anyone outside of the Idaho Legislature and the governor’s office. There is a long list of lawmakers who thought it a grand idea to protect agricultural producers at the expense of those who have a legitimate role in scrutinizing their practices. Not only did these lawmakers want to discourage any and all attempts at whistleblowing, they also wanted such “terrorists” to be threatened with punishment.

We hope the Legislature and Gov. Butch Otter will take Winmill’s ruling to heart and resist any urge or expense to appeal it, and also hope they will learn from it — though we have doubts.

What is especially troubling is the tone-deafness of the 20-some senators and 50-some representatives who voted to pass the law and saw only one side of the issue: the dairy lobby view that, by golly, barns should be like Vegas — what happens there, stays there.

The highly regulated agriculture industry is not a private matter, as Winmill pointed out in a ruling that references Upton Sinclair’s novel “The Jungle,” for which the author misrepresented himself to Chicago slaughterhouses in order to research his exposé on the meatpacking industry. Winmill counters a perception that Idaho agricultural machinations deserve some special level of privacy when “food production and safety are matters of the utmost public concern.”…

There were warnings issued against this bill on its way to becoming law. Chobani CEO Hamdi Ulukaya, whom Otter negotiated with to lure the company to Idaho, urged the governor to veto the bill. Stalwart Republicans such as former Sen. Russ Fulcher, who knows his way around a dairy farm, and Rep. Lynn Luker had the sense to vote against it.

It’s time that some members of our Legislature put as much effort into all of our laws as they do focusing on a few favorites. They might wake up on the right side of a lawsuit someday.

Add to the list Republican governors, Republican-controlled legislatures that stand in line to ban women’s reproductive rights, labor’s right to organize, the right of all citizens to vote.

Some of their sleaziness is native bigotry. The rest can be chalked up to special interests buying their votes. Either road leads to lawsuits and taxpayer dollar$ wasted in the defense of fools who think they miss the 19th Century. 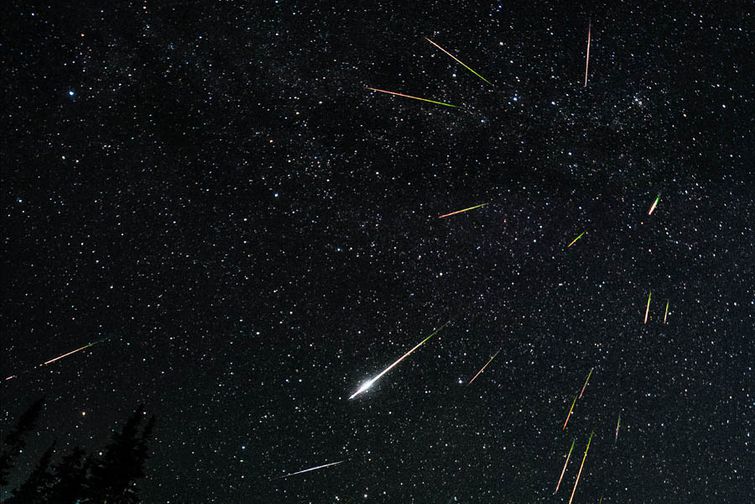 A long exposure photo of the 2012 Perseid shower, as seen in Wyoming — David Kingman

As Earth plows through a trail of dust and rock left behind by the comet Swift-Tuttle, tiny pieces of debris will enter our atmosphere and burn up, producing dazzling shooting stars. Starting around 10 pm local time (regardless of your time zone) on Wednesday, you’ll be able to see as many as 50 of these meteors per hour — with the show aided by the low amount of light coming from the barely visible crescent moon.

A U.S. appeals court struck down a Texas law…requiring voters to show authorized identification before casting ballots, saying the measure violated the U.S. Voting Rights Act through its “discriminatory effects.”

The decision from the U.S. Court of Appeals for the Fifth Circuit pertained to one of a series of laws enacted in Republican-governed states requiring potential voters to show identification that Democrats saw as intended to disenfranchise minorities who typically support their party.

“We affirm the district court’s finding that SB 14 (Texas Senate Bill 14) violates Section 2 of the Voting Rights Act through its discriminatory effect,” a three-judge panel from the New Orleans-based court said.

The measure was signed into law in 2011 by then Texas Governor Rick Perry, a Republican, and has been the subject of legal battles since then.

Plaintiffs argued the law would hit elderly and poorer voters, including minorities, hardest because they are less likely to have such identification…

He has a reason or two. All lies not worth repeating.

The American Civil Liberties Union, which filed an amicus brief in the case to strike down the law, hailed the decision that came near the 50th anniversary of the Voting Rights Act.

“It is fitting for the court to recognize that laws that deliberately make it harder for black and Latino Americans to vote have no place in our democracy,” said Sean Young, a staff attorney at the ACLU’s Voting Rights Project.

There is no voting rights project inside the Republican Party. Of course.

They have only a policy to stop voting rights.

Some folks never learn what year they’re in

Marcus Bradley, a delivery driver for Lowe’s Home Improvement in Danville, Va., was making a routine delivery last week when, he said, he received a call from a manager asking him to return the shipment to work.

“I asked him why I couldn’t do it, and he said because you’re black and they don’t want you at the house,” Bradley told ABC affiliate WSET.

Bradley said his manager told him the customer gave the company specific instructions not to send a black employee to the home. When Bradley returned to the store, he was replaced by a white driver…

Bradley, an 11-year veteran of the company, said he was shocked, and so was fellow deliveryman Alex Brooks, who has worked with Bradley for years and was sitting next to him in the delivery truck when the manager called…

Brooks, who is white, told the station he refused to get back in the truck and complete the delivery without his longtime partner.

Bradley told WSET that he didn’t expect his employer to accept the customer’s demand.

“I mean, I thought that Lowe’s would take up for me,” he said.

Chris Ahearn, a Lowe’s spokeswoman, told The Washington Post that the manager involved in the incident has been fired and that the company wants its drivers to know that “we back them completely.”

“We’ve reached out to the drivers and one of our senior executives went to the store to apologize to them in person,” she said. “We have zero tolerance for discrimination of any kind, and we should never have accepted the terms of the sale with the individuals who were delivered to.”

Of course, I’m pleased to see Lowe’s stand up for civil rights. Their official statement is in the article.

The local TV station interviewed the customer who made the request and she remains unabashedly self-justified in her racism. She fits the mold too often forming American economic and political practices – regardless of the lies used to mask bigotry.

Menzie Chinn updates us today on how things are going in Sam Brownback’s Kansas. Answer: not so good.

The chart on the right compares Kansas to the rest of the country using coincident indexes, an aggregate measure of economic performance tracked monthly by the Philadelphia Fed. It consists of the following four measures:

The index is set to 100 at the beginning of 2011, when Gov. Brownback took office. Brownback instituted an aggressive program of tax cuts and budget reductions, promising that this supply-side intervention would supercharge the state’s economy. But the reality has been rather different. Kansas has underperformed the US economy ever since Brownback was elected.

Why is that? Is the Fed using the wrong employment data? Chinn says no: “The decline shows up regardless of whether employment is measured using the establishment or household surveys.” Is it the weather? “Drought does not seem to be an explanation to me.” How about the poor performance of the aircraft industry? “Evidence from employment data is not supportive of this thesis.”

So what is it? “I would argue much of the downturn especially post January 2013 is self-inflicted, due to the fiscal policies implemented.”

Surprise! I wonder if Kansans will ever figure this out?

It’s doubtful Kansans will figure out a damned thing as long as they continue to accept Republican ideology as rote supreme over anything learned in the United States about economics since the days of Herbert Hoover. Over 80 years ago.

Most of what Republicans pass off as economics isn’t anything more than ideological hopes, convictions rooted in bigotry, class fealty, ignorance. Which is why every time, anytime, they try to pass off the institution of stupidity as an “economic experiment” – it is doomed to failure.

The people who pickup the tab, as usual, are the working class families. Another premise of the conservative dream.