Air pollution has decreased dramatically in parts of the Middle East in the past five years – partly due to armed conflicts since the Arab Spring.

A new study suggests the improvement is the result of the conflicts, economic recessions and human displacement suffered across the region.

The findings state: “A combination of air quality control and political factors, including economical crisis and armed conflict, has drastically altered the emission landscape of nitrogen oxides in the Middle East.”

Jos Lelieveld of the Max Planck Institute for Chemistry in Mainz, Germany, was the lead author of the study, which was published in Science Advances.

Between 2005 and 2010, the Middle East had the world’s fastest-rising air pollution emission levels.

A similar increase took place in East Asia, most likely due to economic and industrial growth.

“However, [the Middle East] is the only region where this pollution trajectory was interrupted around 2010 and followed by a strong decline,” Professor Lelieveld said…

In Syria, the level of nitrogen dioxide over Damascus has fallen by 50 per cent since the start of the civil war in 2011.

“It’s proportional to people, so if emissions have gone down in Syria by 50 per cent, I’d expect that 50 per cent of the people might have been displaced, as indeed they have,” Prof Lelieveld said.

The findings “disagree with scenarios used in prediction of air pollution and climate change for the future,” he added.

Yes, yes. Unless you’re one of the delightful nation-states which carries around the occasional nuclear weapon and threatens other lands with an opportunity to glow in the dark for several thousand years.

I admit, though, it is tempting to consider reducing the number of human beings in any location because of generally positive results. I would prefer doing so in a manner equally beneficial to the human species – as it is to those others, animal and vegetable, occupying the same landscape.

I suggest providing a basic scientific education including knowledge of birth control. In general, everywhere that happens the birth rate diminishes and tends to produce the same result. No fighter-bombers or helicopters required.

Using its robotic arm as a selfie stick, NASA’s Mars rover Curiosity was able to snap some epic low-angle pictures of itself at a site located in the foothills of Mount Sharp earlier this month.

According to BBC News and Space.com, Curiosity snapped the images using the camera at the end of its robotic arm on August 5 while at Marias Pass. NASA officials then took those pictures and stiched them together to create the rover’s latest selfie, which was released on Tuesday…

Compared with previous pictures, this latest Curiosity selfie shows more of its front and underside, and also shows a pair of grey patches located in front of the rover. One patch (the triangular shaped one) is where the samples were extracted from, while the other was where it dumped the powdered rock grain that was too large to be internally analyzed.

Helluva lot more interesting than the crap selfies that pass for entertainment news.

I’ve said it before. I’ll say it again. Republicans would have invented hypocrisy if religious nutballs didn’t beat them to it.

Researchers returned on Sunday from mapping and sampling a massive swirling cluster of trash floating in the middle of the Pacific Ocean, as the Dutch-borne crew works to refine a clean-up strategy it will roll out globally.

The crew of the Ocean Cleanup, backed by volunteers in sailboats, ventured to areas of the “Great Pacific Garbage Patch”, a swirling mass of human-linked debris spanning hundreds of miles of open sea where plastic outnumbers organisms by factors in the hundreds.

The debris, concentrated by circular, clockwise ocean currents within an oblong-shaped “convergence zone”, lies near the Hawaiian Islands, about midway between Japan and the U.S. West Coast. The trash ranges from microscopic pieces of plastic to large chunks.

Working for about a month, the group collected samples as small as a grain of sand and as large as discarded fishing nets weighing more than 2,000 pounds. They mapped the area, using aerial balloons and trawling equipment to locate samples, said oceanographer Julia Reisser…

The next phase, planned for 2016, is the deployment in Japanese coastal waters of a 2,000-meter scale model of the group’s proposed debris collection system, which researchers believe could extend for 96 kilometers.

That system will contain floating stationary booms tethered to the ocean floor and linked in a V shape intended to skim and concentrate surface plastics floating on top of ocean currents.

Every little bit counts. We’re still waiting for realistic regulation and record-keeping of trash discarded from commercial use of Earth’s oceans. The trash should be returned to shore and recycled by those producing it. Of course. 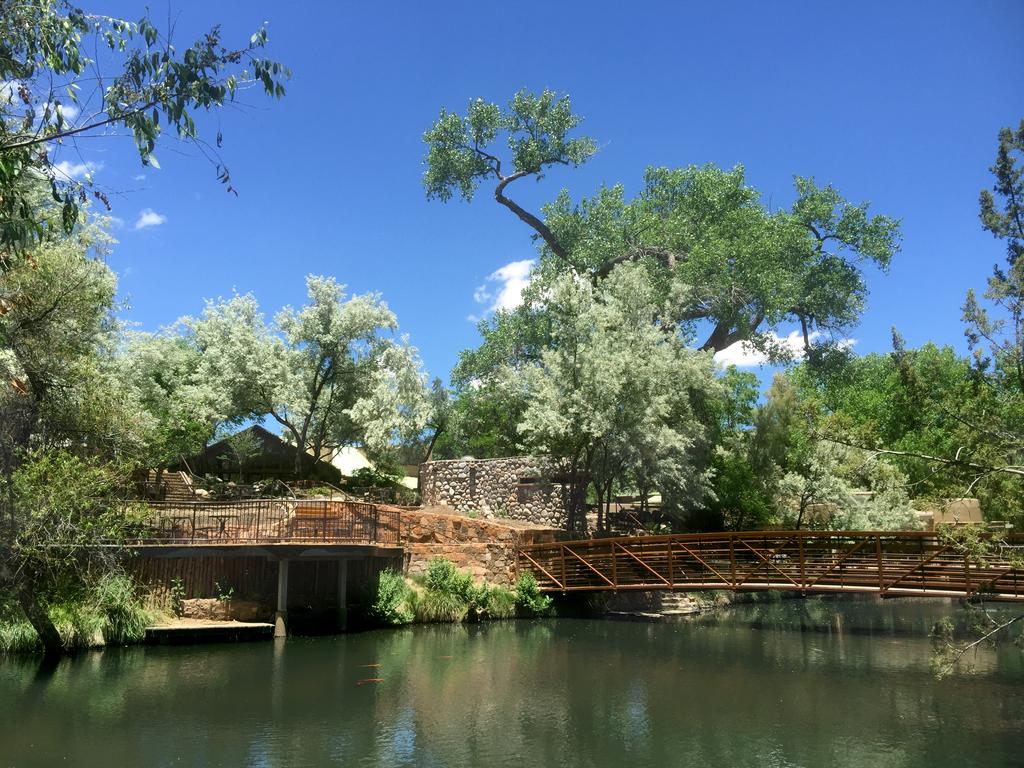 Opening on Aug. 17, Sunrise Springs Integrative Wellness Resort, a 52-room spa resort in Santa Fe, focuses on “nature bathing,” the opportunity to dwell in nature as a stress reducer and energy booster.Daily activities include yoga, meditation, Native American rituals, therapeutic gardening and animal interactions such as chicken therapy, which is presented as a soothing activity that involves stroking a bird’s feathers.

An on-site greenhouse and kitchen garden will serve as showcases for gardening lessons and food sources for the restaurant. Guests are encouraged to unplug from their digital devices. They can seek health consultations with staff doctors and specialists in both Eastern and Western medicine.

“At Sunrise Springs, we encourage our guests to unplug, tune-in and actively engage in their lives,” said David Hans, a psychologist and the resort’s executive director, in a news release. Rates start at $675 per person per day, single occupancy, with a two-night minimum stay, including meals and activities.

Sunrise Springs has been one or another kind of destination for the decades I’ve lived in New Mexico. My wife and I had some delightful meals there in previous incarnations.

We feel no urgency to visit a wellness resort. If anything, we kind of count Lot 4, here, as achieving most of the same functions – though I haven’t done any “nature bathing” or poultry petting since I spent summers on my grandparents’ farm when I was a kid.