The standard methods of detecting the presence of E. coli O157 in meat products use cultures and microbiological assays and can take 48 hours or more to get a result. Meanwhile, the clock is ticking on a given product’s shelf life…

The process is similar to a pregnancy test, where one line indicates a negative result and two lines indicates a positive one. She is now working with a small business to validate the method and test its feasibility.

“I work with E. coli O157 because it has caused many epidemics, and has contaminated both raw and ready-to-cook meats; for example, burgers, sausages, beef and pork. In these circumstances, the products had to be removed from the market,” Tejeda says.

Since Rowan County, Kentucky, clerk Kim Davis was taken into federal custody Thursday for refusing the Supreme Court’s order to grant marriage licenses to same-sex couples (and subsequently released on the condition she not interfere with the issuing of marriage licenses), the religious right has made the Democrat into an icon. Republican presidential candidates are elevating her as the poster child of the Barack Obama administration’s alleged crusade against religious liberty. But by using her government position to force same-sex couples into conforming to her religious beliefs, Davis has instead cast herself as a lasting symbol of bigotry…

While Davis’ actions could be misconstrued as civil disobedience, what separates her from actual civil disobedience leaders is that her actions are rooted in a denial of equality, rather than a push for greater equality. In his Letter From a Birmingham Jail, Martin Luther King wrote,

In refusing the court’s order to recognize same-sex marriage, Davis is no different than Alabama governor George Wallace, who vowed “segregation now, segregation tomorrow, segregation forever,” and defied federal authorities by blocking a doorway to prevent two black University of Alabama students from going to class.

Kim Davis’ era is over. It’s time to impeach her and replace her with a clerk who will do the job without discrimination.

According to Pew research, American support of marriage equality went from 57 percent opposed and 35 in favor in 2001, to 55 percent in favor and 39 percent opposed in 2015…Even the right-leaning National Journal admits that support for gay marriage is up by at least 30 points among virtually all demographics — the only demographics that doesn’t include are African-Americans (up by 26 points), Southerners (up by 25) and Republicans (up by 21 percent). Davis and her supporters fall into a very vocal minority.

Americans have largely evolved beyond their hatred. While racism remains rampant 50 years after desegregation, racists can no longer deny equal access to public places solely based on the color of someone’s skin. And while homophobic views still pervade much of the rural United States despite the Supreme Court’s ruling on marriage equality, same-sex couples in Rowan County, Kentucky, are finally having their marriages recognized. Kim Davis’ era is over. It’s time to impeach her and replace her with a clerk who will do the job without discrimination.

Even on the lowest common denominator of local politics – Kim Davis got her job as a replacement for Mommy who was retiring. All Americans are accustomed to the dangers of generational family politics. We’ve suffered through generations of Bushes starting with a Hitler supporter.

And by the way, one of her deputy clerks is her son. Ready to carry on the family traditions of religious bigotry – and nepotism. 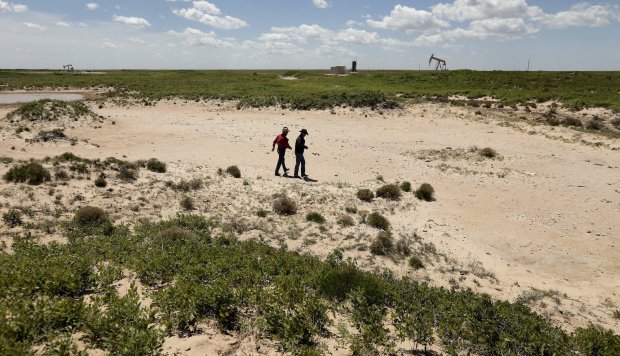 Carl Johnson and his son, Justin, walk across a stretch of pasture laid barren by a wastewater spill

Carl Johnson and son Justin are third- and fourth-generation ranchers who for decades have battled oilfield companies that left a patchwork of barren earth where the men graze cattle in the high plains of New Mexico. Blunt and profane, they stroll across a 1 1/2-acre patch of sandy soil — lifeless, save for a scattering of stunted weeds.

Five years ago, a broken pipe soaked the land with as much as 420,000 gallons of oilfield wastewater — a salty and potentially toxic drilling byproduct that can quickly turn fertile land into a dead zone. The leaked brine killed every sprig of grama and bluestem grasses and shinnery shrubs it touched.

For the Johnsons, the spill is among dozens that have taken a heavy toll: a landscape pockmarked with spots where livestock can no longer graze, legal fees running into the tens of thousands and worries about the safety of the area’s underground aquifer.

“If we lose our water, that ruins our ranch,” Justin Johnson said. “That’s the end of the story.”

Their plight illustrates a largely overlooked side effect of oil and gas production that has worsened with the past decade’s drilling boom: spills of wastewater that foul the land, kill wildlife and threaten freshwater supplies.

An Associated Press analysis of data from leading oil- and gas-producing states found more than 175 million gallons of wastewater spilled from 2009 to 2014 in incidents involving ruptured pipes, overflowing storage tanks and other mishaps or even deliberate dumping. There were some 21,651 individual spills. And these numbers are incomplete because many releases go unreported.

Though oil spills tend to get more attention, wastewater spills can be more damaging. And in seven of the 11 states the AP examined, the amount of wastewater released was at least twice that of oil discharged.

What do you think happened to the land? What remediation was provided either voluntarily by the drillers – or at the behest of local jurisdictions, local, state and federal courts?

Please, read the article. It’s a fine piece of research, the best kind of journalism you will bump into.

Kudos to the AP and John Flesher.