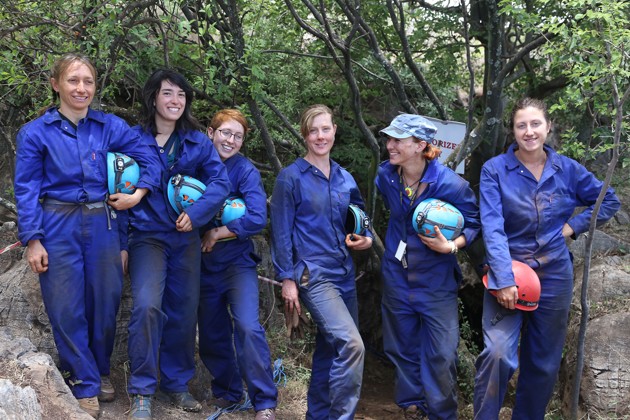 Lee Berger put his ad up on Facebook on October 7th, 2013. He needed diggers for an exciting expedition. They had to have experience in palaeontology or archaeology, and they had to be willing to drop everything and fly to South Africa within the month. “The catch is this—the person must be skinny and preferably small,” he wrote. “They must not be claustrophobic, they must be fit, they should have some caving experience, climbing experience would be a bonus.”

“I thought maybe there were three or four people in the world who would fit that criteria,” Berger recalls. “Within a few days, I had 60 applicants, all qualified. I picked six.” They were all women and all skinny—fortunately so, given what happened next. Berger, a palaeoanthropologist at the University of the Witwatersrand, sent them into the Rising Star Cave, and asked them to squeeze themselves through a long vertical chute, which narrowed to a gap just 18 centimeters wide.

That gap was all that separated them from the bones of a new species of ancient human, or hominin, which the team named Homo naledi after a local word for “star.” We don’t know when it lived, or how it was related to us. But we do know that it was a creature with a baffling mosaic of features, some of which were remarkably similar to modern humans, and others of which were more ape-like in character.

This we know because the six women who entered the cave excavated one of the richest collections of hominin fossils ever discovered—some 1,550 fossil fragments, belonging to at least 15 individual skeletons. To find one complete skeleton of a new hominin would be hitting the paleoanthropological jackpot. To find 15, and perhaps more, is like nuking the jackpot from orbit.

RTFA. It is a delightful read. Science, adventure, perseverance.

About 15 years ago, when she was in her 20s, Erika Walton handed a bong to someone who turned out be a police officer, and was cited for marijuana possession. She paid the fine, she said, but the violation lingered on, haunting her record.

On a recent afternoon, Ms. Walton was at a free legal clinic here in Oregon’s largest city, filling out paperwork to have that infraction forever sealed. Once the process is complete, she will be able to legally say to an employer, landlord or anybody else who asks that she has never been convicted or cited for any drug crime at all…

The mark on her record was minor — a citation for possession under Oregon law, even back then, was below the level of a misdemeanor, roughly equivalent to riding the light rail without a ticket. But it still cost her, she said, when she had to divulge it on applications for jobs and volunteer positions at her children’s school…

Oregon was not the first state to legalize recreational marijuana, which happened through a state ballot vote last November, nor is it the largest. But in preparing to begin retail marijuana sales next month, it is nonetheless blazing a profoundly new trail, legal experts and marijuana business people said.

“Oregon is one of the first states to really grapple with the issue of what do you do with a record of something that used to be a crime and no longer is,” said Jenny M. Roberts, a professor of law at American University in Washington, D.C….

Decriminalizing really means it – in Oregon. Any chance we’ll see similar thoughtfulness, humanity and courage from the Congress-critters who infest Washington, DC?

In the next couple of decades?

The latest images (as of Sept. 11, 2015) downloaded from NASA’s New Horizons spacecraft were stitched together and rendered on a sphere by Stuart Robbins to make this flyover.