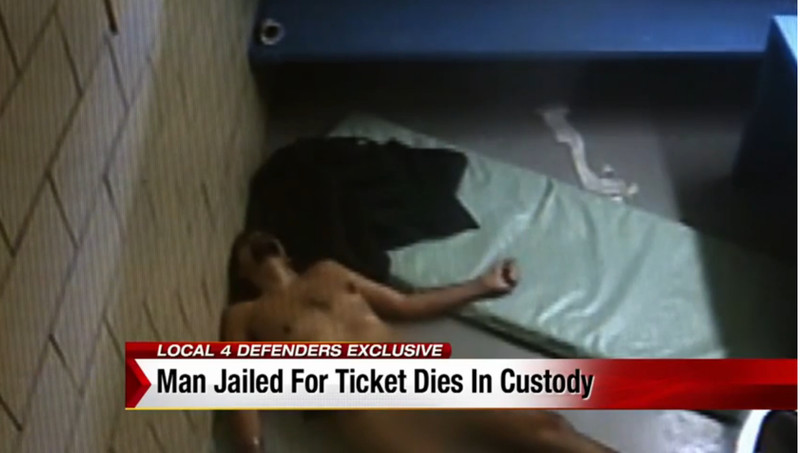 During his 17-day stay in jail, 32-year-old David Stojcevski lost 50 pounds, hallucinated, and experienced seizures and convulsions. It was all caught on a security camera that jailers were supposed to regularly watch. But no one helped — and Stojcevski died.

Now, the FBI is investigating the death, according to Detroit News.

The horrifying death of Stojcevski in the Macomb County, Michigan, jail — first reported by Local 4 — is drawing national attention as the latest example of horrific neglect and brutality by the criminal justice system. And unlike previous cases, it was all caught on video — making it easy to see exactly what went wrong.

But beyond the gruesome images and FBI investigation, Stojcevski’s death speaks to a much larger problem in the criminal justice system: In many cases, jails aren’t staffed, trained, or resourced to deal with cases like Stojcevski’s. But they continue locking up excessive numbers of people, even when it might not be necessary…

Macomb County sheriffs picked up Stojcevski in 2014 after he failed to pay a $772 traffic ticket for careless driving. Stojcevski was placed in a jail cell and later a mental health cell, even though a nurse who evaluated Stojcevski suggested putting him in a drug detox unit.

He was supposed to serve 30 days in jail for not paying the ticket. But he would be held there, naked (inmates don’t wear clothes in the mental health unit, apparently for their own protection), until his death, 17 days after he was locked up…

Over 17 days, Stojcevski displayed typical withdrawal symptoms. He didn’t eat, likely due to withdrawal-induced nausea. He shook and appeared to experience seizures. He seemed to hallucinate, reenacting a previous fight with an inmate. On his last two days, he laid on the floor, shaking and in clear distress.

During all this time, staffers rarely tended to Stojcevski’s needs, even though his cell was under surveillance 24 hours a day. As he lay on the floor shaking and not eating his food over 48 hours, no one showed up to help until the very end. But it was too late — he was pronounced dead at the hospital…

By definition, an overcrowded jail doesn’t have the staff to handle all the problems that arise in these facilities. In Stojcevski’s case, it’s possible that staffers didn’t respond to his clear medical crisis because no one was available, either to watch the 32-year-old or to care for him…

There are also signs that jail staff simply didn’t know how to treat an inmate with medical needs like Stojcevski. As two mental health experts told Local 4, Stojcevski was clearly suffering from a medical condition even as jailers did nothing to care for him.

Or – as so often is the case – jail staff, administrators, county officials and, ultimately, voters, just don’t care a rat’s ass about what happens to people in jail.

Fire up the new Apple News service for the first time on your iPhone, and it’ll ask for your favorite topics and news outlets. Use it over time, and you’ll find that it is behaving like your personal news recommendation engine.

Read a lot about gardening, and you’ll see more stories about hardy perennials. Click on every story about the Red Sox? Get ready for more bullpen analysis. But eventually you may start to wonder — just how much does this app know about me?

You may think you know the answer, given that we live in a world where our every click and scroll is obsessively tracked by tech companies eager to sell us personalized ads. Apple, too, has been employing a small amount of targeted advertising since at least 2010.

But in a revamped privacy policy Web site, a copy of which was reviewed by The Washington Post, Apple on Tuesday attempts to lay out how its philosophy on data collection distinguishes itself from its tech industry rivals.

In essence, the company is telling customers it is not interested in their personal data, even as it must use more of that data to deliver personalized products…

Apple News, which can deliver a stream of headlines right onto one of the home screens of the iPhone, launched this month into a crowded space. Tech giants such as Google, Facebook and Twitter have long been using algorithms to serve piping hot headlines from the Web to consumers while using their reading habits to enhance the vast trove of data the companies keep on every user.

Apple’s offering is different in that its stories are also curated by a small team of journalists. And the company clearly hopes a selling point will be its pledges on privacy protection.

“We don’t build a profile based on your email content or web browsing habits to sell to advertisers,” chief executive Tim Cook wrote in a letter that introduced its privacy Web site last year. “We don’t ‘monetize’ the information you store on your iPhone or in iCloud.”

Apple made substantial updates last fall to its privacy policies and the revamped Web site launching Tuesday offers new details and language on several topics. It is broken down into several sections — such as how it handles information requests from the authorities including the National Security Agency, instructions on how to secure devices from, say, third parties which may be interested in tracking behavior, and how some of Apple’s services work…

A new section on the Apple News app states that it collects data on what each user is reading so it can offer personalized headlines and ads. But the service does not tie reading habits to an Apple account and uses a unique identifier — which functions only within the News app — to send you targeted ads. Readers can also remove a record of their reading history from their device.

It works just like Apple Pay – which is why we love Apple Pay. No chance of anyone from a checkout clerk to the NSA accessing any personal info about the transaction.

In a separate section, the company laid out new language on encrpytion. Last year, Apple made it impossible for the company to turn over data from a customer’s iPhones or iPads — even when authorities have a search warrant — if users turn off automatic back-ups to the company’s servers. The policy has generated protests from police departments and Obama administration officials.

The new language doesn’t mention law enforcement, but the debate over Apple’s decision last fall motivated the company to spell out its thinking on encryption…“Encryption protects trillions of online transactions every day. Whether you’re shopping or paying a bill, you’re using encryption. It turns your data into indecipherable text that can only be read by the right key… And we can’t unlock your device for anyone because you hold the key — your unique password. We’re committed to using powerful encryption because you should know that the data on your device and the information you share with others is protected.”

There’s an interesting discussion at the end of this article about educated consumers coming down on the side of privacy. Hopefully, such questions will make a difference to voters, as well.

Do you want to live in a country where Internet Service Providers can slow down and censor your internet traffic at will, where the NSA has vastly more power than it does today and where end-to-end encryption may be illegal? Then Jeb Bush is the Republican presidential contender for you: he has positioned himself as the anti-internet candidate in an election where internet rights have never mattered more.

A lot of the White House candidates have made worrying comments about the future of surveillance and the internet – from Chris Christie’s bizarre vow to track 10 million people like FedEx packages, to Hillary Clinton’s waffling on encryption backdoors – but Jeb Bush’s deliberate campaign to roll back internet rights is the perfect storm of awful.

Bush proudly stated on his campaign website this week that he would axe the FCC’s important net neutrality rules, a hard-fought, grassroots victory from earlier this year by internet rights activists almost a decade in the making. As the New York Times described it at the time, the net neutrality rules “are intended to ensure that no content is blocked and that the internet is not divided into pay-to-play fast lanes for internet and media companies that can afford it and slow lanes for everyone else…”

As Gizmodo’s Kate Knibbs put it, however, “Instead of viewing the FCC’s net neutrality rule as a safeguard for consumers, Bush is framing it a way to sandbag ISPs out of their rightful profit margins, with no upside for people using their services.” Jeb Bush is apparently happy to side with Comcast and Time Warner, two of the most hated conglomerates in America, rather than the tens of millions of people who just want watch Netflix every night without their internet slowing down or having to pay more.

But that’s just his latest vow to dismantle the hard-fought rights internet users have won over the past few years. Bush is also a mass warrantless surveillance fanatic. He not only continually defends the NSA on the campaign trail, but has called for the mammoth spy agency to be handed even more powers. He’s defended the massive phone metadata program that collected Americans’ phone records that is both wildly unpopular with voters and has already been modified by Congress – and to a large extent shuttered – with the passage of the USA Freedom Act. Bush even claimed the expansion of the NSA over the past six or seven years has been the “best part” of the Obama administration.

Perhaps worst of all, Jeb Bush has ignorantly criticized the welcome trend of tech companies like Apple implementing end-to-end encryption in their devices to protect its millions of users from criminals and government spying. Seemingly channeling his brother George W at an event in August, Jeb said, “If you create encryption, it makes it harder for the American government to do its job…”

I rarely expect the average American voter to vote on behalf of their own economic interest. Might be a bit of a stretch for a society working harder than ever at perpetuating ignorance and obedience.

I hope geeks interested in blogs fond of tech and science are brighter than that. I hope that vague number of Americans still believing in personal privacy will vote – even in another election featuring the untrustworthy vs the folks who try to be nice.

I spend a fair piece of time criticizing President Obama for what he does – instead of doing what he could do. And, frankly, he doesn’t deserve all the credit he gets. Folks like Peter Orszag, Ian Bremmer, even Ben Bernanke and more contributed to fighting our way out of the economic struggle that left us with less than we all had – and might have had.