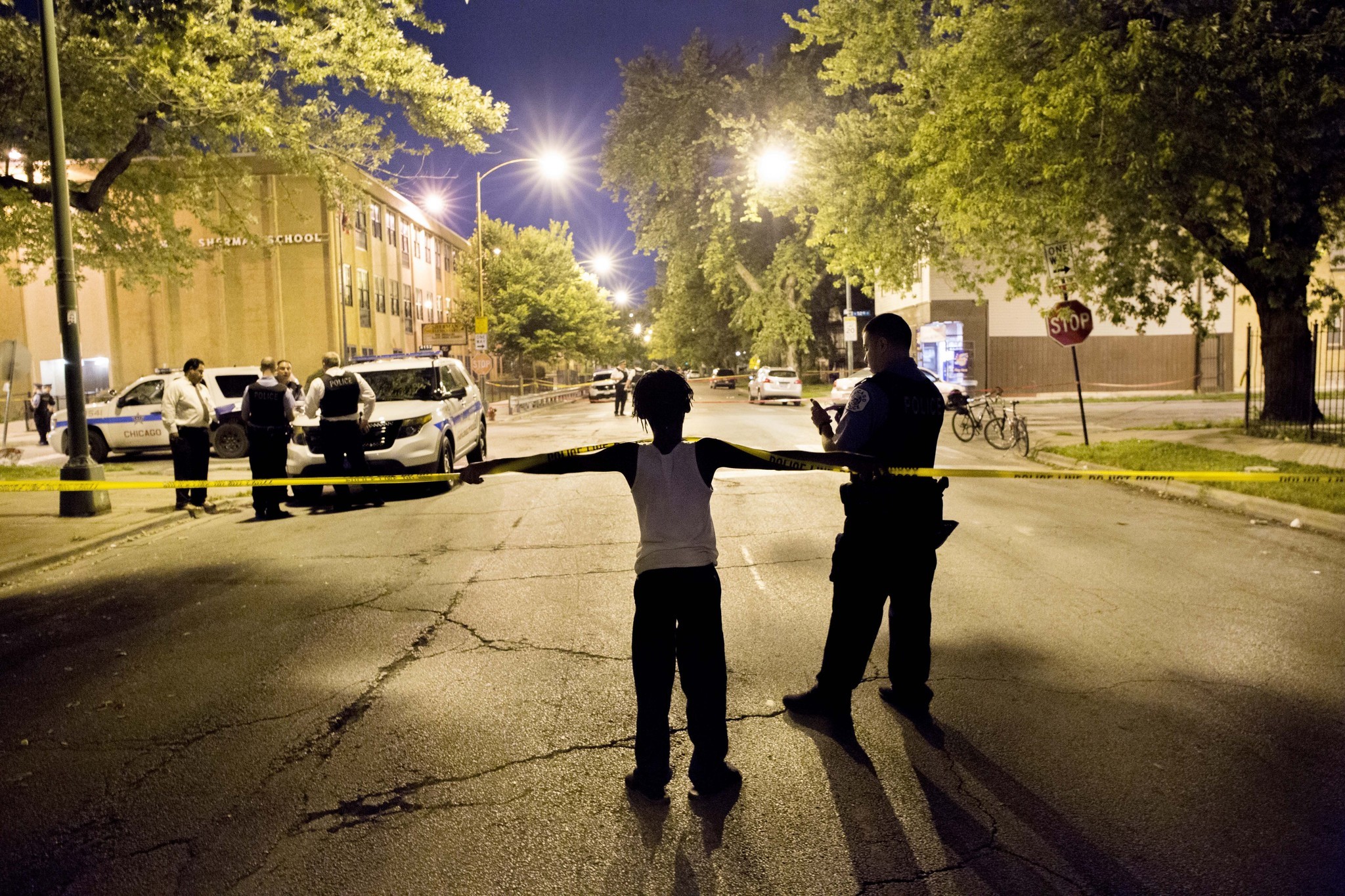 Fourteen people, including two young boys, were shot in Chicago over a 15-hour period from Monday night to Tuesday morning.

Six people were killed and at least eight were wounded, following two consecutive weekends when more than 50 people were shot in the city.

RTFA here if you think you need more details of our gun plague.

The Tribune has been tracking gun violence in Chicago for four years and regularly reports record-breaking incidents of gun violence.

The shootings these past two weeks follow a four-week period in August, when more than 40 people were shot each weekend. At least 2,300 people have been shot in the city this year, which the Tribune said is 400 more than were shot in the same period last year.

The four other people shot from Monday night to Tuesday morning include a two-year-old boy, who was grazed by a bullet in an accidental shooting. Police said he was in good condition.

“Here we go again,” said Chicago police superintendent Garry McCarthy. “We’ve had the same conversation over and over. What do we have to do? We have to hold criminals responsible.”

Yes, the criminals include lawyers who found a profitable career on playing off mediocre legislation against chickenshit courts, bought-and-paid-for judges. That includes more than judges owned by political interests; but, those who cave in to foolish political trends which have nothing to do with reality.

I could roll on for pages on all the currents that bring us to this whirlpool of death. Yes, it includes the history of corrupt, racist police departments. Chicago being one of the worst. None of it takes away from the consummate cowardice and failure of Congressional political hacks. They couldn’t provide leadership to a hound dog looking for a meal in the city garbage dump.

If you’ve ever kept mealworms as food for a pet reptile or frog, then you probably fed them fruits or vegetables. What you likely didn’t know, however, was that the insects can also survive quite nicely on a diet of Styrofoam. With that in mind, scientists at Stanford University have now determined that mealworms can break the difficult-to-recycle plastic foam down into a biodegradable waste product.

The Stanford team fed Styrofoam and other forms of polystyrene to a colony of approximately 100 mealworms.

Within 24 hours, the worms consumed 34 to 39 milligrams of the plastic, converting about half of it to carbon dioxide – as they would with any other food source. Bacteria in the worms’ gut degraded the other half into tiny biodegradable droppings. The researchers believe that those droppings could safely be used as a crop fertilizer.

The mealworms themselves appeared to be just as healthy as worms that received a more traditional diet of vegetable matter.

Working with colleagues in China, the Stanford team members are now investigating whether mealworms or other insects could also be used to break down additional types of plastic, such as polypropylene. They also hope to find a marine equivalent to mealworms, that could consume the tons of plastic waste currently fouling the world’s oceans.

Phew! Now we can go back to comfy styrofoam cups of coffee at our favorite fast food joints.

The pension funds – whose assets total a collective $160bn – have $33m invested in coal, according to the mayor’s office.

“New York City is a global leader when it comes to taking on climate change and reducing our environmental footprint. It’s time that our investments catch up – and divestment from coal is where we must start,” De Blasio said…

This announcement follows a continued global movement to divest from coal. In June, Norway’s parliament endorsed the selling of coal investments from its $900bn sovereign wealth fund, and on 2 September, California lawmakers passed a bill requiring the state’s two largest pension plans to divest any holdings of thermal coal within 18 months…

The mayor also proposed that the pension funds establish long-term investment strategies for all fossil fuel investments “as New York City continues to move toward renewables and away from fossil fuels”.

Now, if we would only kick the foot-draggers [knuckle-draggers?] out of Congress we might see progressive movement in the whole United States on pollution and climate change.

Always worth checking out. My favorite, this year –

Is “Huh?” a Universal Word? Conversational Infrastructure and the Convergent Evolution of Linguistic Items — A study supported by European Research Council grants.

But, wait, there’s more. Many more. All worth a chortle.

A chemistry award for partially unboiling an egg; pretty much all mammals take the same time to pee; an economics award for offering cash to coppers who turn down bribes.

And on and on.