And if they’re using this on GM cotton, we should be able to give palpitations to every Luddite in the country!

Keeping moths away from cotton is typically seen as a good thing. But the United States Department of Agriculture has other ideas. In a pilot program, they’re using drones to drop thousands of lab-grown pink bollworm moths directly onto the cotton fields.

Drones are a cheaper delivery method than the manual throw-moths-out-of-a-small airplane method that has been used in the past, so if the tests continue to go well, you might be seeing more moths flying out of drones in the future.

But why bomb cotton fields with moths? Pink bollworms are a notorious cotton pest. Once they start eating their way through the seeds and fibers, they reduce the quality of the cotton dramatically. So the USDA’s Animal and Plant Health Inspection Service came up with a plan. If they raised pink bollworms in a lab, dyed them red to make them identifiable, and then irradiated them to make them sterile they’d have a population that could safely be released into cotton fields. The idea is that if the wild pink bollworms mate with the sterile pink bollworm moths, instead of each other, the sterile moths won’t be able to reproduce, effectively stopping an infestation in its tracks.

DRONE is a scary word for my friends who already have problems with me taking sides in civil wars – while advocating that Uncle Sugar keep our military and political noses out of other nation’s civil wars. Even though we’re talking about a device a half-step above a hobbyist’s RC airplane kit.

And, of course, irradiation is a word that gives night sweats to folks who don’t know a damned thing about half-life. We could end almost all foodborne illness with gamma radiation as part of food processing; but, that’s way too scary for lots of folks. Even though there is absolutely zero scientific evidence of danger. Only an end to spoilage and food poisoning.

Toyota has been put on the spot by the U.S. government, which has asked the Japanese car maker to explain just how Islamic State has got hold of hundreds of its four-wheel-drive vehicles.

The Toyota Hilux pickup — a model similar to the Toyota Tacoma that’s sold in the U.S. — and Toyota Land Cruisers have become fixtures in the terror group’s propaganda videos…

“Regrettably, the Toyota Land Cruiser and Hilux have effectively become almost part of the ISIS brand,” said one former U.S. ambassador to the U.N., Mark Wallace….

Wallace is currently chief executive for the Counter Extremism Project, which aims to expose terrorists’ financial networks. “I don’t think Toyota’s trying to intentionally profit from it, but they are on notice now and they should do more,” Wallace added.

Questions about ISIS’s use of the vehicles have circulated for years, with the terror group believed to have repurposed older Toyota trucks as well as acquiring hundreds of new vehicles. In a recent ISIS parade, more than two-thirds of the vehicles were white Toyotas with black emblems, and there also were small numbers of other brands such as Mitsubishi, Hyundai and Isuzu…

Tracking who buys and sells used trucks and cars in the Middle East is a farce that could only be thought up by the American flavor of right-wing creep.

The fact is the Toyota HiLux is the most popular pickup truck in the world. Reliable and durable, they last for years. Most of what you see on the tube are diesel-powered, produced by Toyota in Thailand. Bought, stolen or volunteered to serve just about every insurgency and counter-insurgency. They satisfy the needs of most folks in the Middle East regardless of end use. Pretty much everyone in desert country buys white cars and trucks.

Once in a while you see a repainted Chevy – a present from American taxpayers to the Iraq Army – abandoned by soldiers running as fast as possible in the opposite direction from ISIS. 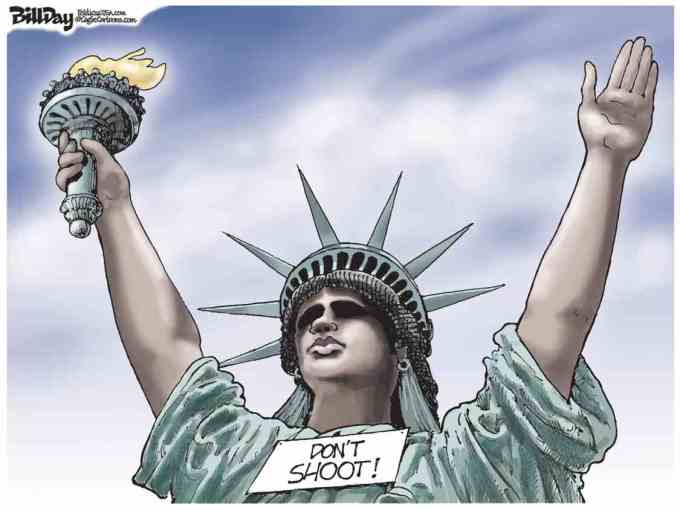 The US government is trialling a new open-source system to count killings by police around the country, in the most comprehensive official effort so far to accurately record the number of deaths at the hands of American law enforcement.

The pilot program was announced by the US attorney general, Loretta Lynch, on Monday and follows concerted calls from campaigners and lawmakers for better official data on police killings, after a nationwide debate about race and policing was sparked by protests in Ferguson, Missouri, in 2014.

In anticipation of the launch, further details of the Department of Justice program were shared with the Guardian, which publishes The Counted, a crowdsourced investigative project that attempts to track all those killed by US law enforcement in 2015. The program is understood to be already active, with a view to full implementation at the start of 2016.

The program will be run by the DoJ’s statistics division, the Bureau of Justice Statistics (BJS), and is seen internally as a more robust version of the currently defunct Arrest Related Deaths Count, which published annual data between 2003 and 2009 using statistics supplied by some of the United States’ 18,000 law enforcement agencies. The BJS eventually stopped collecting this data in 2014 as the level of reporting varied dramatically from state to state, due to the voluntary nature of the program.

The new program, Lynch said on Monday, will start by procuring open-sourced records, such as media reports, of officer-involved deaths, and then move towards verifying facts about the incident by surveying local police departments, medical examiner’s offices and investigative offices.

This approach is near-identical to the one employed by The Counted. A BJS official told the Guardian that the methodology would essentially standardise data collection, meaning the DoJ would no longer have to rely on voluntary reporting by local law enforcement. It is understood that The Counted along with the Washington Post’s police shootings count are being monitored as part of the DoJ program.

RTFA for some discussion, some bullshit, from government officials. Some truth leaks through.

Still, we’re witnessing a good example of citizens and journalism together shaming the government into doing their job. Casual engagement based on budget and happenstance isn’t a productive way to serve the public.

Kudos to everyone from The GUARDIAN to localized groups like #blacklivesmatter for keeping the pressure on.

Last Thursday, John Legere, the C.E.O. of T-Mobile, joined the ranks of the dozens of chief executives who, in the past few years, have had to inform their customers that their personal information has been stolen. “One of our vendors, Experian, experienced a data breach,” Legere tweeted, referring to a Dublin-based credit bureau that his company uses to collect, store, and secure customers’ personal information. Experian explained the details on its Web site:

The unauthorized access was in an isolated incident over a limited period of time. It included access to a server that contained personal information for consumers who applied for T-Mobile USA postpaid services or products, which require a credit check, from Sept. 1, 2013 through Sept. 16, 2015. Records containing a name, address, Social Security number, date of birth, identification number (typically a driver’s license, military ID, or passport number) and additional information used in T-Mobile’s own credit assessment were accessed. No payment card or banking information was obtained.

As one of the fifteen million people who applied for T-Mobile USA’s post-paid services during that period, I was particularly aghast to learn about this breach. T-Mobile USA has, in the past two and a half years, been selling itself as an “uncarrier,” dedicated to upending the telecom industry’s status quo by offering simpler, cheaper, and more intelligible plans. I’d bought into this spin, and believed that it was the way forward for the industry.

Although no financial information was stolen in the T-Mobile breach, the completeness of the data that was acquired is akin to a Lego set for an identity thief. The fraudsters can set up new lines of credit or file for phony tax refunds in our names, and there isn’t much we can do about it. The cybersecurity consultant Bryan Seely told the Seattle Times that, on a scale of one to ten, this breach rates a seven, because it included fifteen million Social Security numbers, along with names and addresses. “When Target had a breach, people were reissued cards. You can’t reissue Socials that easily,” he said. Over the weekend, the e-commerce security firm Trustev claimed that it had found data sets from the Experian hack for sale on the dark Web…

By now, we’re familiar with this pattern: a company discloses a data theft, executives express grave concern, and customers are left to reset their passwords and sign up for free data protection, feeling all the while like data piñatas…

An offer of a credit-watching service in the wake of a hack is sort of like getting an alert after a fire has burned down your house. Moreover, in a recent blog post, Brian Krebs, of Krebs on Security, wrote, “Identity protection services like those offered by CSID, Experian and others do little to block identity theft: The most you can hope for from these services is that they will notify you after crooks have opened a new line of credit in your name.

RTFA for more details and Om’s analysis including the political problems with trying to get business security into the 21st Century. As Om says, 800 data breaches in one year proves the status quo isn’t working.