Sometimes, Wally really is the hero of the day. 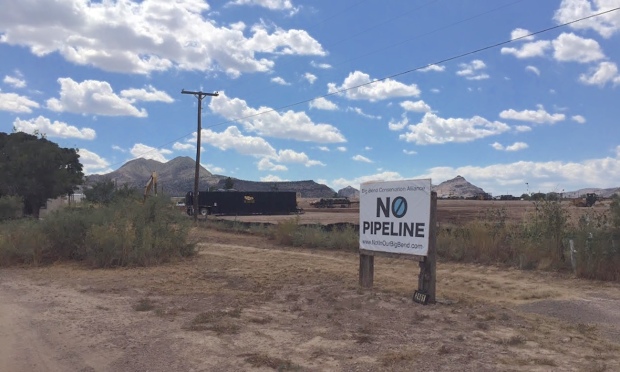 Thorny mesquite branches scratched the sides of James Spriggs’ battered old Chevrolet truck as he drove the rutted pathway from his house towards other, less natural, spiky objects.

On his 4,400-acre ranch there are deer, quail, jackrabbits, roadrunners, dragonflies and even the occasional eagle or mountain lion. And there are wooden stakes indicating the route of a natural gas pipeline that will slice through his property against his wishes.

“They stand out, kind of out of the ordinary, when the light’s correct on them,” he said, picking up a stake that lay flat beneath a small tree. Since their discovery, Spriggs and others have made it their mission to protest a proposal that would be routine almost anywhere else in the state.

Many moved to Big Bend because it is spiritually and physically unlike much of the rest of Texas, which long ago kowtowed to the boom-and-bust thrust of Big Oil, with all its possibilities and problems.

Some 426,000 miles of pipelines already crisscross Texas, acting as the cardiovascular system of the state’s thriving economy. Only one large area is untouched, but that is about to change – unless a diverse group of citizens can prevail in an underdog fight against billionaires, anemic regulators and new economic realities…

The oil industry may be squirming because of the low price of crude, but natural gas pipelines are sprouting as a response to soaring demand in Mexico and legal changes there in 2014 that make it easier for foreign exporters to sell the fruits of the Texas fracking boom…

The Trans-Pecos pipeline is a partnership between companies controlled by billionaires: Mexico’s Carlos Slim, reportedly the world’s second-richest man, and Kelcy Warren, head of Dallas-based Energy Transfer Partners, which in February welcomed former Texas governor and failed Republican presidential hopeful Rick Perry to its board of directors.

They hope that construction will start in the first quarter of next year and in 2017 the 42-inch pipeline will transport 1.4bn cubic feet of natural gas per day from a processing plant near Fort Stockton to the border, where the line will go under the Rio Grande and connect with Mexican infrastructure.

END_OF_DOCUMENT_TOKEN_TO_BE_REPLACED

“With the number of outbreaks that we are seeing around the country, with the increase of events of the virus being imported into this country, it really gives the sense that there’s some work to do to make sure that our kids are safe. The whole world is connected on this issue,” Matthew M. Zahn, MD, medical director for epidemiology for Orange County Public Health in California…

Based on data from the National Immunization Survey-Teen, the researchers estimated the number of measles-susceptible children and adolescents, ages 17 and younger, in the U.S. “This allowed us to look at, not only those who had ever gotten a dose of the measles vaccine, but also at children who have gotten doses late because of parents who choose to delay vaccinations,” Robert Bednarczyk, PhD, of Emory University said…

The investigators estimated that 12.5% of U.S. children were at risk for measles, and for children ages 3 and under, that rate of susceptibility could be as high as 24.7%…

Zahn encouraged primary care providers to avoid the mindset that because there is a low rate of measles incidence that it’s acceptable for parents to delay vaccination.

None of the sillyass reasons for skipping vaccination are legitimate. The mindset – all too often – has nothing to do with the effectiveness or safety of vaccination; but, rather myth, unfounded fears, misconception and very often – folks being deliberately misled.

That last reason usually profits someone other than kids and families.

Authorities say an 18-year-old man drove a stolen car to police headquarters to pick up court papers about a previous auto theft he was involved in — documents that were found in yet another stolen car.

Detectives contacted Butler, who arranged to pick them up. When he arrived at police headquarters, a detective arrested Butler and found keys to a Hyundai Sonata in his pocket. The car was located a block away.

It, too, had been reported stolen.

Butler is being held without bond…

Cripes! They got the kid on a three-fer.