Even though they have fleas. 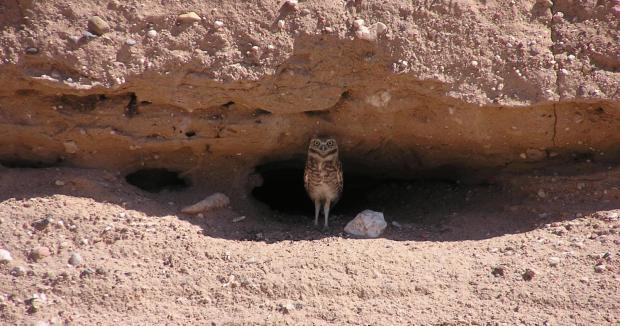 Plague! The word conjures images of horrors past, piles of festering medieval dead overrun by rats. It’s not a disease of the past though; the bacteria that causes plague can be found in the United States, and a few cases of human bubonic plague happen every year.

The animals that carry plague in the US are mostly rodents—rats, ground squirrels, and prairie dogs—and their fleas can pass plague bacteria to humans if they decide to bite us. Good news, though: The adorable little owls that live in burrows alongside those plaguey rodents seem to be immune. Although the owls have fleas capable of carrying plague, they are not infected—and their immunity could provide some interesting information to scientists studying the disease.

Western burrowing owls (Athene cunicularia) nest underground, often re-using rodent burrows. Working with these predatory birds is not for the faint of heart; even small owls have powerful beaks and claws. Burrowing owls live in areas where you are just as likely to stick your hand in a burrow and and pull out a rattlesnake as an extremely irate little raptor.

Dr. Jim Belthoff of Boise State University has spent years sticking his arm into nest tunnels in search of owls—often past piles of excrement. In addition to being very cute and fluffy, these owls have an endearing habit of decorating their nests with turds. Not their turds, mind you; they collect and bring mammal dung back to their front doorstep. It’s thought the poo attracts insects that the owls snack on.

Adding to the grossness, Belthoff noticed burrowing owls seemed to have lots of fleas. “We considered the fleas a nuisance, as they would jump on us as we captured and banded the owls, and they would infest our field vehicles.” This made him wonder: Do the fleas affect the owls? And what kind of fleas were they?…

His team collected thousands of fleas from burrowing owl nests during banding and health checks…Good news, though! They found no evidence of the plague bacteria in owl fleas they collected, or in the blood of the owls. They also did not find antibodies to plague in owl blood, which would be expected if owls were regularly exposed. “There are no public health concerns related to burrowing owls,” says Belthoff. “All our test results were negative to plague—in antibodies, in the fleas and in the blood of the owls.”

One possibility was that fleas were just hitching a ride on the owls, and not feeding on them. Additional tests determined the fleas did contain burrowing owl DNA in their guts, so they were drinking owl blood. The owls just weren’t getting infected with plague.

No answers, yet; but, since these delightful raptors are seriously endangered and a diminishing species, hopefully, more effort will be made to protect them – and find out why they aren’t passing along plague.