In a blistering New York Times column, David Brooks accuses today’s Republican Party of betraying the actual tenets of conservatism. “By traditional definitions,” he writes, “conservatism stands for intellectual humility, a belief in steady, incremental change, a preference for reform rather than revolution, a respect for hierarchy, precedence, balance and order, and a tone of voice that is prudent, measured and responsible.”

Today’s Republicans, he continues, have abandoned all that. The GOP is increasingly driven by a faction that “regards the messy business of politics as soiled and impure. Compromise is corruption. Inconvenient facts are ignored. Countrymen with different views are regarded as aliens. Political identity became a sort of ethnic identity, and any compromise was regarded as a blood betrayal.”

It’s perhaps not a surprise that Brooks, a Burkean conservative, finds the party of Donald Trump and Ben Carson a bit objectionable. What’s interesting is the precise nature of his diagnosis. Republicans, he says, have become prisoners of their own rhetoric:

Over the past 30 years, or at least since Rush Limbaugh came on the scene, the Republican rhetorical tone has grown ever more bombastic, hyperbolic and imbalanced. Public figures are prisoners of their own prose styles, and Republicans from Newt Gingrich through Ben Carson have become addicted to a crisis mentality. Civilization was always on the brink of collapse. Every setback, like the passage of Obamacare, became the ruination of the republic. Comparisons to Nazi Germany became a staple.

This produced a radical mind-set.

The result is a party that has convinced its voters that America needs a political revolution and is now surprised to find its voters turning to revolutionaries. “These insurgents are incompetent at governing and unwilling to be governed,” Brooks says. “But they are not a spontaneous growth. It took a thousand small betrayals of conservatism to get to the dysfunction we see all around.”…

BUT…Establishment Republican candidates feel they have to use revolutionary rhetoric to win over the Tea Party, and since they face no sanction from the desperate moderates in their party when they pander to the right, it’s an easy choice. Until that changes — until players like Brooks are angrier at the center of their party for indulging these tendencies than they are at the fringe for taking advantage of the result — the Republican Party is going to continue to get pulled far to the right.

Ezra Klein pins the essential hypocrisy of moderate Republicans like Brooks. The rhetorical lie of George W Bush and Mitt Romney alike is that the Republican Party is a big tent. They only extend that teflon-coated sheet in one direction – to the Right – to accommodate their own bigotries, to allow room for the extensions of imperial arrogance to every corner of a planet they still feel destined to own – if not govern.

The southern sand octopus has taken hide-and-seek to a whole new level. It shoots jets of water into the seafloor creating quicksand that allows it to vanish.

A skilled architect, the octopus can build a mucus-lined home – complete with a chimney –20 centimetres down into the seabed, where it holes up during the day. It only emerges from its underground burrow at night to crawl over the seafloor and snack on small crustaceans…

Other octopuses, including Octopus berrima bury themselves under a thin layer of sediment by digging into it with sweeping arm movements. But because they need direct access to the water column to breath, they remain close to the sediment surface, with their funnel sticking out.

The sand octopus has a rather different technique – it actively digs deeper though the soft sand and constructs an actual subsurface burrow, says Jasper Montana of the University of Melbourne. “This is the first known cephalopod to burrow,” he says.

Montana and his team first caught the octopus in the act of burrowing in 2008 when they were scuba diving at night in Port Philip Bay, south of Melbourne, Australia. When they shone a light on the octopus, the startled animal spread out its arms and repeatedly injected high-powered jets of water into the sediment using its funnel. This caused grains of sand to be temporarily suspended in water, making it like sandy water…

They found that the animal used its arms and mantle to push the sand away and form a burrow. It also extended two arms to the surface to create a narrow chimney to breathe through. Finally, it secured the walls of its new home with a layer of mucus that kept the grains of sand together so the entire thing maintained its shape.

February 2015 wasn’t just the record coldest February in Syracuse, New York. It was also their coldest single month dating to 1903. Their average temperature during the month, taking into account actual highs and lows, was 9 degrees.

It continues, of course. Folks don’t realize that extremes are an expected result of climate change. Even if the defining characteristic is global warming, temperature and humidity changes produce individual weather extremes below as well as above recorded normals. The difference between trends and events. 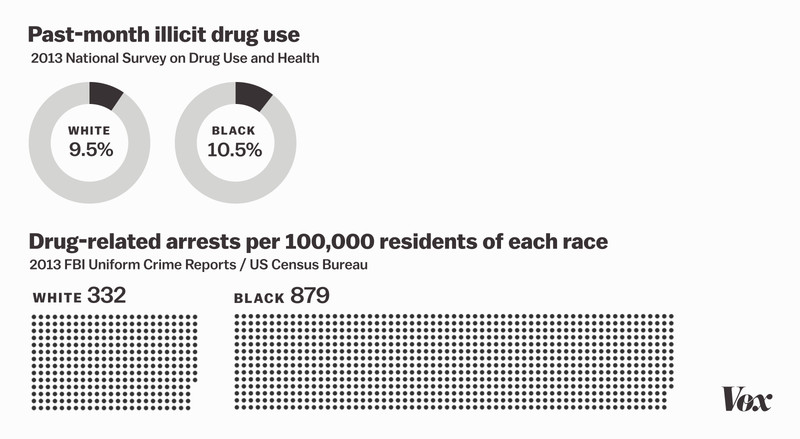 African Americans are hit much harder than any other racial or ethnic group by the war on drugs, even when there’s no evidence of significantly higher drug usage or sales. The most obvious disparity appears between white and black Americans: Both groups use and sell, according to some studies, illicit drugs at similar rates, but black people are roughly 2.6 times as likely to get arrested for drug crimes.

What’s behind the disparities? Sometimes, racism and the subconscious racial biases of law enforcement are major factors. But often, it’s a collision of socioeconomic trends and otherwise race-neutral policies. One example, from a Sentencing Project report released in February: “Socioeconomic inequality does lead people of color to disproportionately use and sell drugs outdoors, where they are more readily apprehended by police.”

These types of disparities cascade down through the war on drugs and the rest of the criminal justice system, leading to the racially divided results shown in the chart above.

Lazy-ass coppers picking low-hanging fruit. Or something like that.