We’ve looked at those numbers a bit, but you can take this comparison even further: If you include all gun deaths (including homicides, suicides, and accidents), guns killed more Americans between 2001 and 2013 than terrorism, the wars in Iraq and Afghanistan, AIDS, and illegal drug overdoses combined: 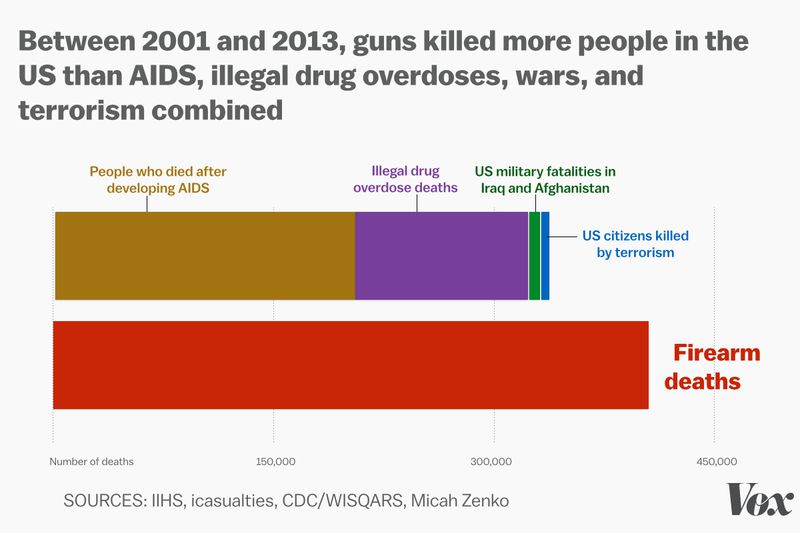 The federal government has spent a lot of money and time trying to lower the death toll from things like car accidents and AIDS. It’s waged metaphorical wars on terrorism and drugs, and literal ones in Iraq and Afghanistan, to keep Americans safe. And yet the United States won’t take the most basic steps on the national level, such as requiring background checks on every gun sale in America, to reduce the death toll from guns.

“We spent over a trillion dollars, and passed countless laws, and devote entire agencies to preventing terrorist attacks on our soil, and rightfully so,” President Obama said in his Thursday evening statement. “And yet we have a Congress that explicitly blocks us from even collecting data on how we could potentially reduce gun deaths. How can that be?“

Greedy, small-minded, hate-filled cowards are capable of stopping progress dead in its tracks — as long as they are members of Congress.

How different are politicians who tell the same lies?

American whistleblowers hailed the release on Thursday of a collection of classified documents about US drone warfare as a blow on behalf of transparency and human rights.

The documents anchored a multi-part report by the Intercept on the Defense Department assassination program in Yemen and Somalia. Amnesty International, the American Civil Liberties Union (ACLU) and other rights groups said the report raised significant concerns about human rights violations by the US government, and called for an investigation.

Classified documents published by the Intercept include pages from a 2013 study of the drone program by a Pentagon taskforce. The documents came from “a source within the intelligence community who worked on the types of operations and programs described in the slides”, the Intercept said…

…“In some ways it reconfirms and illuminates much of what we knew, or thought we knew, about a lot of these programs, like that the administration firmly prefers kill over capture despite claiming the opposite, and that there’s not ‘a bunch of folks in the room’, as Obama calls it – that there’s a clear, bureaucratic process for this, said Micah Zenko, a senior fellow at the Council on Foreign Relations.

“It clearly shows, as we’ve known, that the United States does not know who it’s killing.”…

The Intercept report revealed, among other new disclosures, that at one point in 2012 Obama had approved 20 people for assassination in Yemen and Somalia. More than 200 were killed by drones in those countries that year…

It revealed that the military labels unidentified people it kills in targeted strikes as “enemies killed in action”, although victims may be family members or associates of actual targets – or may just have been nearby, or mistakenly targeted.

“In an astonishing act of civil courage, one American just shattered an unspeakable lie,” Snowden wrote. “When we look back on today, we will find the most important national security story of the year. Today, @DanielEllsberg is smiling.”

Ellsberg, who in 1971 leaked the Pentagon Papers secret history of the Vietnam war, confirmed in an interview with the Guardian that he was smiling.

“He’s right about that,” Ellsberg said.

Ellsberg said the source behind the Intercept reports was part of a chain of recent whistleblowers going back to Chelsea Manning, the US army soldier who passed classified documents to WikiLeaks and was convicted of violating the Espionage Act.

“It’s wonderful,” Ellsberg said. “I waited 40 years to see somebody, for Chelsea Manning, to put out a comprehensive, sufficiently voluminous number of long-held secrets, enough to make the case clear.

“I waited 40 years for Chelsea. Three more for Snowden. And so it’s wonderful that somebody is telling the truth about this series of crimes. I’m very glad to see it.”…

…“I hope they stay anonymous. Nothing at all would be gained by their suffering the fate of exile like Snowden…or isolation or imprisonment like Chelsea…Or the life sentences that I faced, or that others have faced.

“They did the right thing. The others were wrong to keep those secrets.”

I salute whoever is doing our nation a service by exposing our government’s lies.

With China set to announce its third-quarter gross domestic product report on Monday, skepticism over its economic data is arising anew.

Recall that Bill Gross has described China as “the mystery meat of emerging-market countries.” Premier Li Keqiang, before taking that post, said he didn’t rely on official statistics. He preferred things like rail freight and electricity use to gauge activity.

So is China about to puff up its economic report card once more?

Quite the contrary, according to one of the world’s foremost emerging market investors, Mark Mobius.

“I know there’s a lot of debate as to whether the numbers are true, whether it’s really 7 percent, but our numbers indicate that it is at least that,” the chairman of the emerging-markets group at Franklin Templeton Investments said in a recent interview with Bloomberg TV. “We think that a lot of the economy is not really being counted because China is being converted from a manufacturing-oriented economy to a service economy.”

That gels with the view of Rhodium Group analysts in a September report for the Center for Strategic and International Studies.

Their 200-plus page study found China’s GDP methodologies are largely in line with international practices and charges that estimates are sheer fabrications are “misinformed.”…China’s economy is bigger, not smaller than official data suggests, the analysts found, with the services sector the hardest to measure and real estate even more important than currently reflected…

As for Monday’s reading, economists forecast the government will say GDP growth slowed to 6.8 percent in the three months through September from a year earlier. That would be the slowest quarterly pace since 2009.

That isn’t deterring Mobius, who says: “The transition is definitely on its way and is going to be successful.”

I could write pages on the topic – and won’t. I honestly don’t think the average American cares enough to look beyond the party line fed officially from the White House and Congress – and willingly, by the Beltway Press like the Washington POST. And, of course, that includes the New York TIMES. Just let me back up a Wall Street minute.

I was never interested in serious investing for the future. My bad. So, I was really pissed-off when the criminal derivative called the Great Recession hit all of us. What little I had squirreled away in what I thought were safe, conservative funds was diminished by over half in a matter of weeks.

Pissed-off, I decided to manage my savings myself. Took what I had left to cash and studied business and industries I knew something about and prepared for the start of the slow turnaround I expected. After all the creeps in charge had damaged the world economy as severely as the Wall Street Crash of 1929. Some aspects of economic life might never return.

I started investing just a few months before March, 2009 – the bottom. Since then, the cash I had has multiplied over 500%. The industries I knew about were mostly geeky, tech-oriented. My business experience the last 30 years was grounded in Asian producers, American companies invested in Asia.

I spent those years witnessing all the usual crap about Asian misconceptions: country by country, Japan, Taiwan, finally China. I learned how to survive a culture of bribery that was thousands of years old – and changed dramatically in just the past few years. I chuckled over Americans discovering Chinese Marxists figuring out how to heat up the achievement of socialist ideals through a market economy – something I was berated for seriously discussing in the late 1950’s. Really.

I’ve watched and listened to the same official crap, pandered and promulgated by everyone from the Compradore pimps who fled China with Chiang Kai-shek in 1949 to the short sellers who make a quick fortune with their quarterly expose of one or another corrupt little corporate entity – blathering about crooks who couldn’t even stand in the shadows of the truly corrupt barons of Wall Street – or Wolfsburg.

But, I also paid attention to folks like Stephen Roach, Peter Nolan, Richard Evans and, yes, Mark Mobius…and former White House advisors like Ian Bremmer because after all, even if Obama’s foreign policy can’t and won’t improve upon that of John Foster Dulles – he still really needs to know what is going on.

I guess I probably should have gotten pissed off, sooner, eh? 🙂