And I’d be astounded if you honestly didn’t know who to expect to kneejerk vote against progress – even when the head of one of those nations leads in global hypocrisy by doing so.

The vote was 191 to 2. The two nations being the United States and Israel. Arrogant imperial twins.

The United Nations General Assembly on Tuesday condemned a U.S. trade embargo on Cuba for the 24th year in a resolution that Washington voted against despite warming ties and a push by President Barack Obama to remove the economic sanctions.

The resolution was adopted by the 193-member General Assembly with 191 votes in favor. Israel joined its ally the United States in voting against…

Obama told the annual gathering of world leaders at the U.N. General Assembly last month he was “confident our Congress will inevitably lift an embargo that should not be in place anymore.”

But, he didn’t have the integrity to instruct our delegate to the UN to vote against the embargo.

Cuban President Raul Castro’s government, while working to improve ties, has made clear full normalization will require the complete lifting of the embargo and the return of the U.S. naval base at Guantanamo Bay.

Given that Obama’s policy change reversed the course of 10 previous U.S. presidents, Rodriguez said “one would have expected” a yes vote from Washington.

While the resolution has always passed with a lopsided vote, this year’s result of 191 to 2 was the strongest ever in Cuba’s favor with near unanimity and no abstentions.

A dog named Trigger shot his 25-year-old owner in the foot in a bizarre accident that had Indiana officials on Monday reminding hunters to take safety lessons.

She laid her 12-gauge shotgun on the ground while repositioning herself and her 11-year-old chocolate Labrador stepped on the gun, depressing the trigger, said Indiana Conservation Officer Jonathon Boyd.

The safety of the shotgun was not on, so it went off and Carter was shot in the left foot…

Carter, who had never completed a hunter education course, was hospitalized. She suffered non-life-threatening injuries from the bird shot pellets and was treated and released, Boyd said.

Indiana officials said that users of firearms should always point the muzzle in a safe direction and use the safety mechanism. Anyone born after Dec. 31, 1986 is required to take a certified hunter education course before purchasing a hunting license in Indiana.

However, anyone can get up to three apprentice hunter’s licenses without taking such a course, if accompanied by a person who has taken it, Boyd said. Carter had an apprentice license and does not face any charges…

What is there to say – anyway? 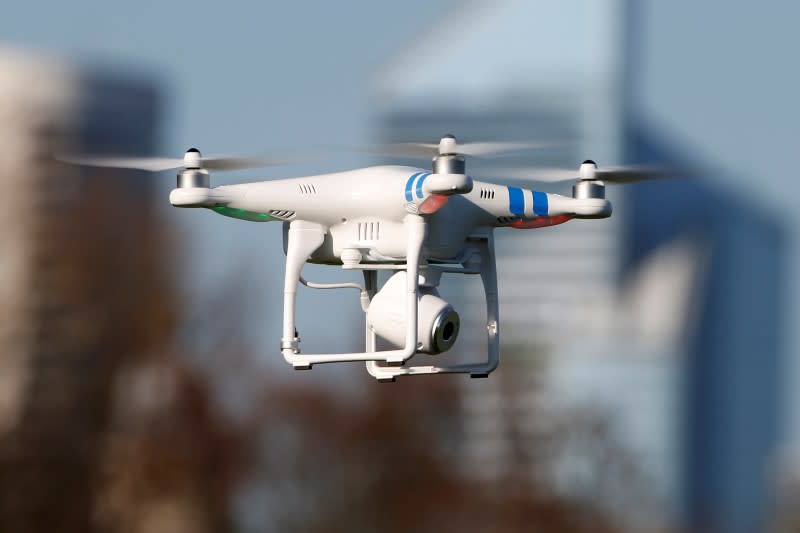 Wal-Mart Stores applied Monday to U.S. regulators for permission to test drones for home delivery, curbside pickup and checking warehouse inventories, a sign it plans to go head-to-head with Amazon in using drones to fill and deliver online orders.

The world’s largest retailer by revenue has for several months been conducting indoor tests of small unmanned aircraft systems – the term regulators use for drones – and is now seeking for the first time to test the machines outdoors. It plans to use drones manufactured by China’s SZ DJI Technology Co Ltd.

In addition to having drones take inventory of trailers outside its warehouses and perform other tasks aimed at making its distribution system more efficient, Wal-Mart is asking the Federal Aviation Administration for permission to research drone use in “deliveries to customers at Walmart facilities, as well as to consumer homes,” according to a copy of the application reviewed by Reuters.

The move comes as Amazon.com, Google and other companies test drones in the expectation that the FAA will soon establish rules for their widespread commercial use. FAA Deputy Administrator Michael Whitaker said in June that the agency expected to finalize regulations within the next 12 months, faster than previously planned. Commercial drone use is currently illegal, though companies can apply for exemptions…

Wal-Mart spokesman Dan Toporek said, “Drones have a lot of potential to further connect our vast network of stores, distribution centers, fulfillment centers and transportation fleet,” he said. “There is a Walmart within five miles of 70 percent of the U.S. population, which creates some unique and interesting possibilities for serving customers with drones.”

Cripes. Looking at Apple Maps, we just squeak in for 5 miles as the crow flies. I’ll see if I can sign up our little compound for test flights.

Of course, straight-lining it would take them through every flight path over the Municipal Airport. 🙂

A Syrian man carrying his daughters across rubble after a barrel bomb attack on the rebel-held neighborhood of Kalasa in Aleppo, September 2015.