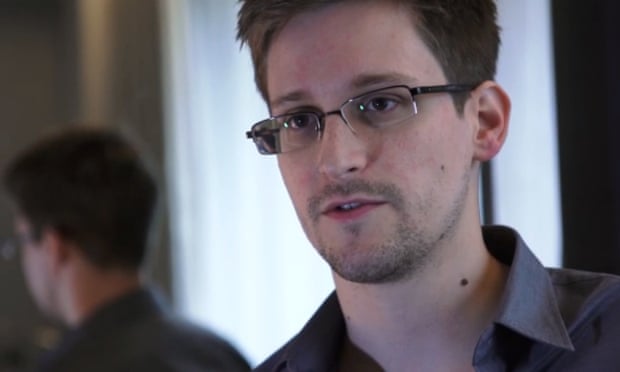 Edward Snowden on Thursday hailed as “extraordinary” and a “game-changer” a vote in the European parliament calling on member states to prevent his extradition to the US.

The parliament voted 285-281 to pass a largely symbolic measure, a resolution that called on European Union member states to “drop any criminal charges against Edward Snowden, grant him protection and consequently prevent extradition or rendition by third parties, in recognition of his status as whistleblower and international human rights defender”…

The European parliament is a directly elected legislature with members from all 28 EU member states. Its legislative authority is limited. The resolution amounted to a request that member states reject attempts by the US to arrest and prosecute Snowden.

“This is not a blow against the US government, but an open hand extended by friends,” Snowden tweeted. “It is a chance to move forward.”

The US government did not, however, seem to see it that way…

While the US has promised Snowden due process, it has charged him under the Espionage Act of 1917, which forbids the disclosure of state secrets and which would not allow Snowden to argue in his defense that his disclosures had a public benefit.

“We welcome today’s decision of the European parliament recognizing Edward Snowden as a human rights defender and calling upon member states to grant him protection from prosecution,” Wolfgang Kaleck, Snowden’s lawyer in Berlin, said in an email.

“It is an overdue step and we urge the member states to act now to implement the resolution.”

Nice to see there are some politicians in the Western world willing to stand up to the Beltway bullies in the United States. The mentality, the proto-fascist ideology that somehow designates the United States as cops of the world, superseding any defense of constitutional freedoms is lodged just as thoroughly in the DNA of liberal Democrats as Republican conservatives – both the Wall Street flavor or pea-brained Confederates.

In case you forgot what an empty coal car looks like

Cloud Peak Energy is making the payments to Westshore Terminals Investment Corp. to cut the amount of coal it’s obligated to export from Westshore’s port in British Columbia from 2016 to 2018…Westshore said it expects its 2016 coal volumes to be 13 percent below previous estimates because of its amended agreement with Cloud Peak.

The arrangement comes as U.S. coal miners face their worst market downturn in decades. Mounting environmental regulations, cheap natural gas and a stronger U.S. dollar are all shrinking demand for their supplies abroad.

In case you wondered if the activity in recent years on behalf of cleaner industry, cleaner electricity, alternative energy sources, was having a positive effect. One of the best gauges of effectiveness is how much whining we hear from fossil fuel creeps facing lowered profits.

Next round? Republican Party and Blue Dog Democrats increase their sudden concern for jobs. Ain’t it amazing they never notice folks when they’re dying on the job; but, when mine owners profits are cut “jobs” becomes part of their hypocrite lexicon.

A 20-year-old International airport in the South Indian city of Kochi has become the world’s first solar-powered airport.

The airport can now produce more than 50,000 units of electricity with its new solar plant, making it energy self-sufficient. The airport’s solar panels were made in China.

Cochin International Airport was India’s first private-public partnership airport and it’s also the seventh-busiest airport in the country. Now it has become the world’s only airport run entirely on solar power.

Over the next 25 years, the Cochin Airport will cut 300,000 tons of carbon emissions, which is equal to planting 3 million trees. The Indian government is looking at solar as a major source of power and is planning an investment of $100 billion in the sector by 2022.

RTFA for the video coverage. Kudos to India for the commitment. In 1927, Jørgen Hals spoke to ghosts—or so it seemed. The Norwegian engineer was picking up radio signals from a Dutch shortwave transmitting station when he began to notice strange echoes of the original transmission.

While echoes are nothing out of the ordinary in radio transmissions, they usually occur about 1/7 of a second after the original transmission, the amount of time it takes a radio wave to travel once around the Earth.

The bizarre thing about these echoes, Hals wrote in a letter to the Norwegian physicist Carl Strømer, was that they were occurring up to three seconds after the original transmission and demonstrated a severe declension in amplitude that wouldn’t be expected if the signal had merely made several trips around the Earth.

Hals didn’t even attempt to explain what the signal meant. “From where this echo comes I cannot say for the present,” Hals wrote to Strømer shortly after his discovery. “I can only confirm that I really heard it.”

Hals’ original observation of what are now known as Long-Delayed Echoes (LDEs) set off a frenzied investigation into this unsettling phenomenon in the following years, although just what accounts for these echoes still remains a mystery.

One of the more outlandish explanations of these echoes invokes an alien civilization trying to communicate with us. In 1960 Ronald Bracewell proposed in Ronald Bracewell proposed in Nature that if we were to be contacted by an autonomous artificially intelligent alien probe, the messages we received would most likely sound like the echoes reported by Hals and Strømer in 1928, the reflection of our own radio signals back to us being a highly energy efficient mode of establishing contact.

This theory was later expounded upon by science fiction author Duncan Lunan in 1973, who wrote about a 13,000 year old alien probe from the constellation Boötes hiding out in the vicinity of the moon and echoing back our messages…

“The starship hypothesis is a very interesting one, and the one which seems to be the most popular one on the internet,” said Sverre Holm, a professor of signal processing at the University of Oslo. “Such theories always excite our imagination, but it builds on a very poor data set. Unfortunately I believe it says more about human imagination than anything else.”

RTFA. We really haven’t resolved this phenomenon. Holm says, “I think that with today’s satellites and sensors, the mystery of LDEs could probably be solved,” he said. “What’s holding us back is most likely the problem is not considered important enough—it doesn’t occur often enough and doesn’t affect important enough forms of communications.”

Now, I’m going to have to keep this on my list of things that still need to be solved – and could be. Probably.