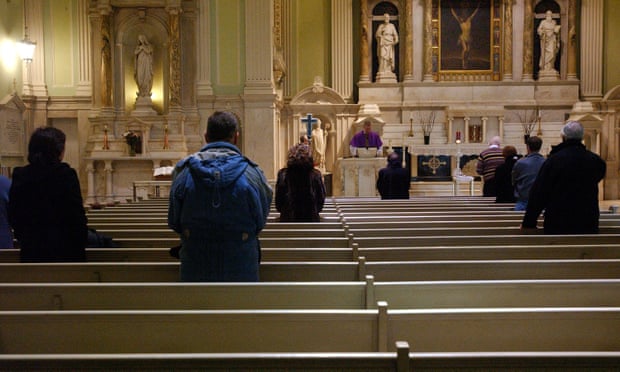 Declining levels of religious belief and practice among the generation of Americans born in the last two decades of the 20th century is shifting the US towards becoming a less devout nation, a major new survey has found.

The growing proportion of “millennials” – young adults now in their 20s and 30s – who do not belong to any organised faith is changing America’s religious landscape, says a report by the respected Pew Research Center, based on a survey of 35,000 people.

The religiously unaffiliated or “nones”, who include atheists and those who describe their religion as “nothing in particular”, have grown to 23% of the US population, compared to 16% at the time of the last comparable survey in 2007.

But three out of four Americans still have some religious faith, mainly Protestant denominations, Catholics, Jews, Mormons, Muslims, Buddhists and Hindus. And 89% of US adults say they believe in God – including a significant proportion of “nones” – making America more religiously inclined than other advanced industrial nations.

“Advanced” referring to industrial economy and GDP. Not necessarily education, quality of life.

In general…“as older cohorts of adults (comprised mainly of self-identified Christians) pass away, they are being replaced by a new cohort of young adults who display far lower levels of attachment to organised religion than their parents’ and grandparents’ generations did when they were the same age”…

The changes are reflected in support for the two main political parties, with “nones” now forming the largest single religious group among Democrats, while evangelical Protestants make up the largest religious bloc among Republicans.

Nearly all major religious groups have become significantly more accepting of homosexuality, the report says. A majority of all Christians now say homosexuality should be accepted by society, up from 44% in 2007 to 54% in 2014, with the proportion of Catholics up from 58% in 2007 to 70% in 2014.

There has been little change in attitudes to abortion, with 53% of all adults saying it should be legal in all or most cases…

11% of all US Christians say they speak or pray in tongues at least once a week…Slightly lower than the generally accepted percentage of Americans who think the Earth is flat.

Authorities say an Illinois police officer, whose fatal shooting this summer led to a large-scale manhunt, staged his death after committing a series of criminal acts over a seven-year period.

Filenko said that Gliniewicz had “been stealing and laundering money” from the police department’s “Explorer Post,” a program for young adults interested in law enforcement careers, and had used thousands of dollars for personal expenses, mortgage payments and adult websites.

The investigation also found that Gliniewicz had “intentionally left a staged trail of police equipment,” including pepper spray and a baton in an effort to “mislead” first responders and investigations into believing his death was a homicide, Filenko said, adding that Gliniewicz had experience staging mock crime scenes for police training purposes.

“There are no winners here,” Filenko said. “[Gliniewicz] committed the ultimate betrayal to the citizens he served and the entire law enforcement community…”

Gliniewicz’s death set off a large manhunt, with hundreds of officers searching houses, cabins and boats on area lakes. Helicopters with heat-sensing scanners and K-9 units scoured the area for days. Officials also ordered commuter trains halted, roads blocked and area schools locked down as they conducted a widespread search in a wooded area about 40 miles north of Chicago near the Wisconsin border…

Around 50 suburban Chicago police departments and sheriff’s offices assisted, racking up more than $300,000 in overtime and other costs…

Gliniewicz became known as a hero to young people because of his work with the Explorers program – that he stole from. Always nice to have a bit of oversight where money is concerned, folks.

This happened last Friday and I completely missed it:

Six years after legislation to encourage end-of-life planning touched off a furor over “death panels,” the Obama administration issued a final rule on Friday that authorizes Medicare to pay doctors for consultations with patients on how they would like to be cared for as they are dying.

The administration proposed the payments in July, touching off none of the rancor that first accompanied the idea during debate on the Affordable Care Act in 2009….“We received overwhelmingly positive comments about the importance of these conversations between physicians and patients,” Dr. Conway said. “We know that many patients and families want to have these discussions.”

Huh. It turns out that Republicans never really had any problem with this at all. I guess that whole “death panel” thing was just a big misunderstanding. The Wall Street Journal explains what happened:

Since 2010, legislation that would allow reimbursements to physicians for advance planning discussions has gained bipartisan support….The climate has changed in part because of lobbying and education campaigns by medical groups.

Yeah, that must be it. I’m glad we got that straightened out.

Except for Sarah Palin, of course, who offered her familiar common-sense take:

“Government needs to stay the hell out of our ‘end-of-life’ discussions,” she said in a long, um, commentary on Facebook. “I’m so angry at democrat and republican politicians who just rolled their eyes when I, and many others, rose up with warnings that each step forward taken by champions of this socialist program would jerk back two steps from every free American and our God-given rights.”

On Monday, the minister in charge of national drug strategy said that Ireland’s next government will likely move toward decriminalizing all drugs, the Irish Times reported. Aodhán Ó Ríordáin also said that the country will open up injection rooms for heroin addicts, where users can obtain and use the drug — under strict medical supervision — without resorting to criminal traffickers and dealers.

This does not mean that Ireland stores will begin selling marijuana, heroin, and cocaine anytime soon. But if the next government takes up the plan outlined by Ó Ríordáin, it would remove criminal penalties for the possession of these drugs, eliminating the risk of prison time for drug possession, while criminal penalties remain for manufacturing, trafficking, and selling the substances.

Ireland wouldn’t be the first country to do this. In a move that got a lot of media attention, Portugal in 2001 decriminalized all drugs, including heroin and cocaine. Reports from Portugal have found largely promising results, with drug use remaining relatively flat as more people get treatment for their drug problems.

But Portugal didn’t just decriminalize; it also paired up decriminalization with a much greater emphasis on public health programs for drug addicts. That seems to be what Ireland is trying to do, as well. And at a time when the US is dealing with a harrowing opioid painkiller and heroin epidemic, Portugal and Ireland’s radical approaches could provide a lesson to America.

Which presumes the United States once again recognizes health as a public need with public solutions.

…Eliminating or at least diminishing the stigma surrounding these drugs could also come with a public health benefit: It would make it so that people aren’t as scared to get help when they need it. This is what a 2009 report from the libertarian Cato Institute found when it looked at Portugal’s decriminalization scheme: “The most substantial barrier to offering treatment to the addict population was the addicts’ fear of arrest. One prime rationale for decriminalization was that it would break down that barrier, enabling effective treatment options to be offered to addicts once they no longer feared prosecution. Moreover, decriminalization freed up resources that could be channeled into treatment and other harm reduction programs.”…

The details of Ireland’s new drug policies are still being worked out. But the country’s current government seems interested in adopting an approach that focuses first on treating instead of imprisoning drug users. And Ó Ríordáin seems convinced that the next government will continue along that path with full decriminalization…

But more broadly, the new Irish approach is increasingly becoming the new norm. As more countries take another look at the war on drugs and its failures to significantly cut down on drug use, they’re looking to rely less on law enforcement and more on doctors and hospitals to deal with drug abuse and addiction. Ireland is just the latest high-profile example of this shift. America, as it deals with its opioid epidemic, might not be too far behind.

I manage to be both an optimist and a cynic. I believe much of the educated world will continue to move towards solving substance abuse questions as a public health issue. I don’t include the United States in that equation.