If there’s one thing Joseph Stiglitz wants to say about inequality, it’s that it has been a choice, not an unexpected, unfortunate economic outcome. That’s unnerving, but it also means that citizens and politicians have the opportunity to fix the problem before it gets worse.

In his new book, Rewriting the Rules of the American Economy: An Agenda for Growth and Shared Prosperity, Stiglitz, a Nobel-prize winning economist, professor at Columbia University, and the chief economist at the Roosevelt Institute, asks the question “Can the rules of America’s economy be rewritten to benefit everyone—not just the wealthy?” The answer, he insists, is yes.

Stiglitz describes the current situation as “a stark picture of a world gone wrong”: He notes that 91 percent of all income growth between 2009 and 2012 was enjoyed by the wealthiest 1 percent of Americans. In the first half of the book, Stiglitz focuses on the practices and policies that have gotten the country to this point. It is a familiar story: The demise of labor unions, the increasing financialization of the economy, and the lack of wealth-building opportunities in minority communities have made the rich richer while leaving everyone else to flounder. He lists off a bevy of other contributors too: weak wages, ineffective regulation and federal oversight, and a focus on short-term versus long-term growth, which embodies a preference for rewarding shareholders over workers and consumers.

Stiglitz also notes that despite advancements in technology, which should — in theory — increase efficiency and lower costs, consumers are paying more in fees for financial services, which enriches big banks and companies while siphoning money out of the middle class. All of these things, he says, have created a society with a gaping hole, not only in its economic makeup, but in its morality.

Stiglitz spends the latter portion of the book laying out how to fix things. Like his primer on how inequality came to be, the solutions cover everything from fiscal policy to corporate boardrooms to retirement savings. His overview doesn’t prioritize pragmatism: A solution that only involves overhauling the few things that everyone agrees need to be overhauled is no solution at all, he argues.

Instead, he swings for the fences, suggesting a massive revision in the way the U.S. economy does business. First up is the attempt to tame what is called rent-seeking—the practice of increasing wealth by taking it from others rather than generating any actual economic activity. Lobbying, for example, allows large companies to spend money influencing laws and regulations in their favor, but lobbying itself isn’t helpful for the economy besides creating a small number of jobs in Washington; it produces nothing but helps an already rich and influential group grow more rich and more influential. Stiglitz suggests that reducing rent-seeking is critical to reining in inequality, especially when it comes to complex issues such as housing prices, patents, and the power that large corporations wield.

RTFA for an outline of recommendations from Joe Stiglitz. Nothing you haven’t heard of – or who is affected the most. The rich and powerful who own Congress and your state government.

Read his book. Get your butt in gear to avail yourself of what little political power you have. It’s sad that our only choice – at the moment – is removing power from the evil of two lessers. Kick Republicans and Blue Dog Democrats out of office. Elect liberal and progressive Democrats. Fight to get them to adopt an electoral platform based on a complete overhaul of our tax system, a reform of our education system focussed on standards from students to teachers and administrators, rejuvenating infrastructure.

It ain’t going to happen from the top down. That will be the promise from both political parties. Crap propaganda. We need to shovel away the opportunists who chose political life for profit and power. That’s as much hard work as anything else. 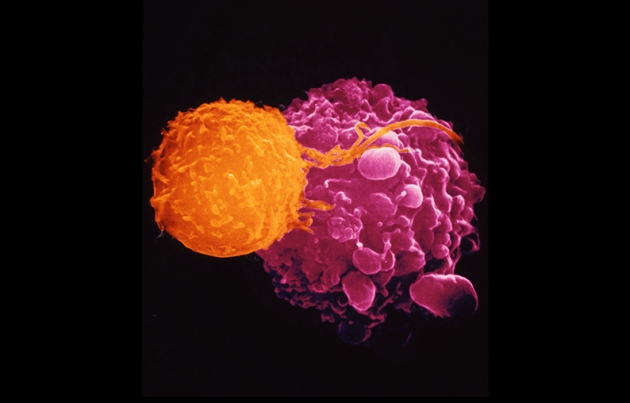 An engineered herpesvirus that provokes an immune response against cancer has become the first treatment of its kind to be approved for use in the United States, paving the way for a long-awaited class of therapies. On 27 October, the US Food and Drug Administration approved a genetically engineered virus called talimogene laherparepvec to treat advanced melanoma. Four days earlier, advisers to the European Medicines Agency had endorsed the drug.

With dozens of ongoing clinical trials of similar ‘oncolytic’ viruses, researchers hope that the approval will generate the enthusiasm and cash needed to spur further development of the approach. “The era of the oncolytic virus is probably here,” says Stephen Russell, a cancer researcher and haematologist at the Mayo Clinic in Rochester, Minnesota. “I expect to see a great deal happening over the next few years.”

The strategy builds on a phenomenon that has been appreciated for more than a century. Physicians in the 1800s noted that their cancer patients sometimes unexpectedly went into remission after experiencing a viral infection. These case reports later inspired doctors, particularly in the 1950s and 1960s, to raid nature’s viral cupboard. Clinicians injected cancer patients with a menagerie of viruses. Sometimes the therapy destroyed the tumour, and sometimes it killed the person instead.

Unlike the wild viruses used in those mid-twentieth-century experiments, some of today’s anti-cancer viruses are painstakingly engineered. T-VEC, for example, has been altered to drastically reduce its ability to cause herpes. Researchers also inserted a gene encoding a protein that stimulates the immune system, which makes the virus even more potent against cancer…

Researchers like Brad Thompson look forward to a day when physicians will be able to pick from a menu of oncolytic viruses and select the best fit. “Each virus interacts with the immune system differently,” he says. “They could have a role in pretty much all cancer therapy.”

The more precisely scientists can tailor these oncolytic viruses, the greater the accuracy they can achieve, I imagine there will be matching increases in success rates curing any number of cancers. Not a bad use of GM technology – I would say.

Each year, Jim Gray held a battle of the machines.

Gray — the legendary computer scientist who won the Turing Award for his work with computer databases — was lost at sea in 2007, mourned across the computer science community and beyond. But in the years since, others have continued his battle of the machines. Today, as we move so rapidly into the age of cloud computing, this competition doesn’t just pit one machine against another. It pits an army of machines against so many other armies.

In recent years, researchers at Microsoft — where Gray was working when he died — have topped several of these contests. Last year, a top prize went to a team that includes one of the top engineers at Google. Researchers from the University of California at Berkeley have also fared well. But this year, there was a new winner: Alicloud, which sorted 100 terabytes of data in a mere six-and‐a-­half minutes, abusing the previous record of 23-and-a-half minutes.

Alicloud, or Aliyun, is the cloud computing arm of Chinese tech giant Alibaba. It’s analogous to Amazon Web Services or Microsoft Azure or the Google Cloud Platform…Such “public cloud” services represent the future of information technology. A new report from research outfit Forrester deems the public cloud a “hyper-growth market,” predicting that this market will grow to $191 billion by 2020. Here in the States, Amazon is the king of cloud computing, with revenues of about $6 billion a year, and the two big challengers are Microsoft and Google…and Alicloud is very much on the rise in China…

RTFA for all the details. Especially if you’re a datahead geek. An enjoyable read with only a trace of the “White Man’s Burden”.

Sooner or later journalists will realize that a connected world doesn’t care a rat’s ass about who rolled out a particular style or method first. It will take editors and publishers with their usual commitment to ideology – called style – a few more decades.

Politicians and pundits? Maybe another century.