❝When pro-gun demonstrators announced plans to hold a fake mass shooting on Saturday at the University of Texas in Austin, another group chose to respond with an unusual weapon of their own: flatulence.

The pro-gun protesters took to the streets of the Texas capital for an “open-carry walk” along the western edge of the UT campus on Saturday at noon. Participants were encouraged to bring “rifles and legal black powder pistols,” according to the event’s Facebook page. The walk was to be followed by a staged reenactment of a mass shooting, complete with cardboard weapons, fake blood, and the sounds of gunshots…

The plan for the fake mass shooting was met with an immediate backlash when it was announced earlier this week. A counter-demonstration was quickly put together, and the organizers behind the rival event apparently decided that brandishing sex toys and blasting the sound of fart noises was the best way to highlight the absurdity of the situation.

❝Taral Patel, a UT-Austin student involved in the counter-protest…said it looked as if the full-scale mock shooting that was advertised didn’t happen as planned…“The protesters drew outlines of bodies and spread ketchup all around it and left it there…”

Gun nuts generally have as much of a sense of humor as Dick Cheney and other daleks. I’ll take minions any day.

When Beijing’s air was forecast to reach hazardous levels for three straight days earlier in December, the government issued a smog red alert. The result: Half the city’s cars were off the roads within hours, schools were closed and construction sites shut down. Less than three days later, pollution levels had dropped by 30 percent.

When New Delhi’s winter air grew so bad that a high court warned that “it seems like we are living in a gas chamber,” the city’s top official declared that cars would be restricted starting Jan. 1, with odd and even license plates taking turns on the roads. But police officials quickly announced they hadn’t been consulted, and said they’d have trouble enforcing the rule. Plus, no one could fully explain how the already overstretched public transit system could absorb millions of additional commuters overnight.

So, well, maybe the whole plan will be scrapped…

❝Long famous for its toxic air, Beijing is struggling to lose that reputation, bowing to pressure from a growing middle class to keep pollution under control. Traffic is regularly restricted in the city, factories have been moved and the central government is anxious to ratchet down the country’s use of coal-burning power plants.

And New Delhi, which by many measures now has far more polluted air than Beijing? So far, the environmental court — which has only quasi-legal powers — has ordered that no diesel cars be registered in the city for the next few weeks, and has discouraged the government from buying diesels for government fleets. Officials, meanwhile, have suggested everything from car-free days to planting more trees to dedicated bus lanes.

It amounts to little more than vague promises, and is resulting in increasingly angry headlines…

❝”In China, whenever you talk about PM2.5 (one of the most dangerous forms of airborne particulate matter), everybody knows what that is, it’s pollution. But once you raise the same questions in Delhi, it seems like not many people care about that. And yet, the level of pollution in Delhi is more than five times” higher than in Beijing, said Yann Boquillod, a longtime Beijing resident who co-founded Air Visual, a startup that crunches pollution data and weather information to predict air quality…

❝In China, an authoritarian system makes policy changes much more straightforward than in India, where a chaotic and widely corrupt government makes it easier for polluters to avoid regulations.

“China has made a very serious and concerted effort to fight air pollution in the past few years,” said Lauri Myllyvitra, Greenpeace’s global campaigner on coal. She said Beijing’s success came when it realized the problem had to be addressed regionally, not just in the city.

“Our greatest hope is that India will not waste a decade trying to address a regional problem locally … but will move much faster to put in place regional action plans for cleaner energy sources and fuels, as well as meaningful emission standards and enforcement,” she said…

Our politicians learned long ago to describe serious questions in political terms instead of economics. You can fuss with the former for decades without actually changing anything. So, India is described as a great democracy while that nation’s corruption has surpassed China – while China has moved in the other direction to begin to counter historically-accepted levels of corruption.

But, much of the difference remains economic. Though it may take Beijing as long as London or Los Angeles to overcome smog problems, China can afford to make the needed changes. India can’t. Not yet. They will need assistance whether their politicians care to admit it or not. 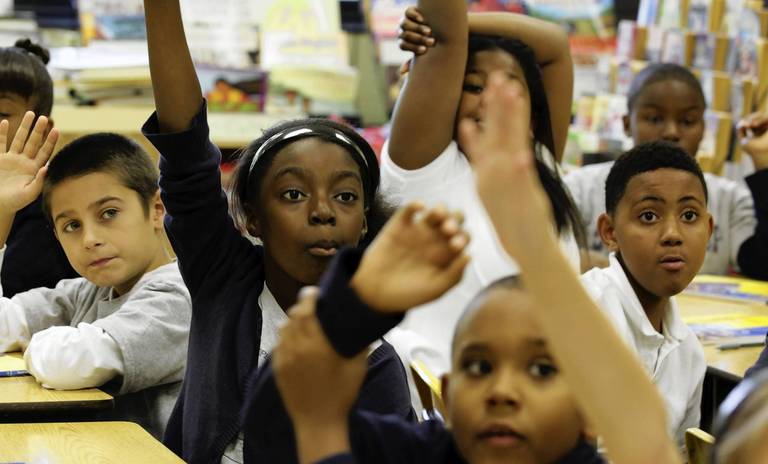 Charter schools are able to siphon off large quantities of public money for private gain — and only substantial changes to state policies regarding charter schools can stop this, according to the authors of the report…

Many education reform advocates argue that the charter school model — under which publicly funded schools are administered by bodies other than the school board, such as private Education Management Organizations (EMOs) — promotes experimentation and newer, fresher teaching methods. But the same permissive charter regulations intended to boost innovation can also help EMOs pocket cash better spent elsewhere…

“What we found is that there are a host of real estate and tax laws that were not put in place with charter schools in mind, but that the owners of charter school enterprises are using in order to profit,” NEPC Director Kevin Welner said. “I think that understanding the nature of the charter school gravy train, as I call it, is extremely important for the public and policymakers.”

❝The report also contends that labor costs at charter schools tend to be unusually top-heavy, as EMO executives conserve funds by hiring young, relatively inexpensive staff — and then add the savings to their own salaries.

“Early studies of charter schools in Pennsylvania found charter teacher annual salaries to be on average $18,000 lower than teacher salaries in district schools,” the report said. In contrast, top EMO heads can draw comfortable six-figure salaries, the report said. Eva Moskowitz, a high-profile New York charter advocate and CEO of the city’s Success Academy network of charter schools, was found in the report to earn more than $475,000 annually…

With conservative politicians from both of the two old parties ready and willing to privatize anything that moves – transparency in fiscal policies anywhere is at risk. Turn the weasels loose in the public education chickenhouse and you jeopardize the future of our children. Turning that money back into good teachers in public schools can make all the difference in the world.

A week’s worth of Republican ideology in action — in one panel.