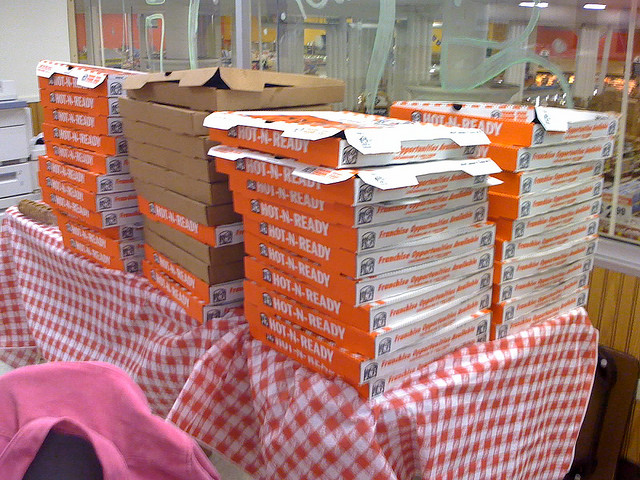 ❝Even the packaging of some greasy, late-night indulgence foods may be bad for you.

Three substances commonly found in paper and cardboard food containers were banned this week from food packaging by the US Food and Drug Administration, in a long-delayed response to a 2010 petition filed by a group including the National Resources Defense Council.

The substances are part of a group of chemicals called perfluoroalkyl substances, or PFASs, and are found in many products, including electronics, breathable fabrics, and shoes. They can remain in the body and the environment for years at low levels, raising concerns about eating foods from PFAS-treated containers, where the chemicals act as oil repellants.

❝It’s unclear exactly what kind of harm these PFASs could actually cause, but the report accompanying the FDA’s Jan. 4 announcement states that “there is no longer a reasonable certainty of no harm.” In other words, there may be negative health consequences from repeated exposure to PFASs, though the science is still out on what those negative effects may be…

Chemicals related to PFASs, known as perfluorooctanoic acids, or PFOAs, have been connected to thyroid disease, ulcerative colitis, and preeclampsia, a potentially life-threatening high blood pressure in pregnant women. PFOAs are typically found in non-stick coatings on pots and pans.

Certain types of PFASs have already been discontinued by DuPont, which manufactures PFOAs and PFASs. In May 2015, a group of scientists published a statement of concerns for the long-term risks of exposures to these substances…

❝For consumers, this ruling only means that the packaging for delicious, oily foods may be slightly less resistant to greasy goodness. There’s no word yet on what new packaging may or may not contain, but for now, here’s one more reason to eat your pizza hot and fresh on the premises, instead of ordering in.

Or make your own pizza from scratch. Delicious, fresh, exactly to taste.

❝Juniper Networks said…it would stop using a piece of security code that analysts believe was developed by the National Security Agency in order to eavesdrop through technology products.

The Silicon Valley maker of networking gear said it would ship new versions of security software in the first half of this year to replace those that rely on numbers generated by Dual Elliptic Curve technology.

The statement on a blog post came a day after the presentation at a Stanford University conference of research by a team of cryptographers who found that Juniper’s code had been changed in multiple ways during 2008 to enable eavesdropping on virtual private network sessions by customers.

❝Last month, Sunnyvale-based Juniper said it had found and replaced two unauthorized pieces of code that allowed “back door” access, which the researchers said had appeared in 2012 and 2014.

The 2014 back door was straightforward, said researcher Hovav Shacham of the University of California, San Diego, allowing anyone with the right password to see everything.

The 2012 code changed a mathematical constant in Juniper’s Netscreen products that should have allowed its author to eavesdrop, according to Shacham and his fellow investigators…

❝Still another curve constant, quietly provided by the NSA and required for some federal certification, was exposed in documents leaked by former NSA contractor Edward Snowden as a key to the back door.

Until now, the most influential adopter of Dual Elliptic Curve was believed to be RSA, part of storage company EMC, which Reuters reported received a $10-million federal contract to distribute it in a software kit for others.

The NSA did not respond to an emailed request for comment from Reuters. If they had, they likely would have lied – as usual. They lie to the American people, to Congress, to the world about all of their corrupt and invasive practices. Why presume they’d tell the truth to the press after lying to a corporate partner, a dupe like Juniper?

❝For years, research has shown that babies born by cesarean section are more likely to develop health problems. Now, a groundbreaking study suggests that not all C-sections are equally risky.

The research looked at all full-term, firstborn births in Scotland over a 15-year period and tracked the babies’ long-term health. It is one of the largest and longest studies to explore how planned C-sections differ from other deliveries.

❝Surprisingly, the data showed more health problems among babies born by planned C-section than among those delivered by emergency C-section or vaginal birth, even though the planned surgery is done under more controlled conditions. The finding suggests that the arduous experience of labor — that exhausting, sweaty, utterly unpredictable yet often strangely exhilarating process — may give children a healthy start, even when it’s interrupted by a surgical birth.

❝Dr. Mairead Black, the University of Aberdeen obstetrician who led the study, said that as cesarean births had increased in Scotland and worldwide, the researchers wondered what, if anything, children born by C-section “are missing out on.”

“Our thinking was: If a baby is born naturally, it comes into contact with bacteria from the mother, which might help with immune system development,” Dr. Black said.

Even attempted labor may provide some exposure to bacteria, she said. But babies delivered by a planned C-section, which is usually scheduled to take place well before the first pang of labor, may miss out entirely…

❝Studies have consistently found that children born by C-section are at higher risk for health problems like obesity and allergies. C-section birth has also been associated with a higher risk for Type 1 diabetes.

The Scottish study took advantage of the small country’s rich trove of linked birth and medical databases to track the long-term health of 321,287 babies. Nearly 4 percent were born by planned C-section and 17 percent were delivered by emergency surgery. The remaining 252,917 were vaginal births.

The researchers compared a range of health outcomes among the babies, including asthma, irritable bowel syndrome, obesity, Type 1 diabetes, early death and cancer…

❝No one knows exactly why labor may be protective, but the spontaneous onset of labor prompts fluid to clear from a baby’s lungs, said Dr. Aaron Caughey, who helped draw up 2014 guidelines for the American College of Obstetricians and Gynecologists that urged providers to let women spend more time in labor and avoid an unnecessary C-section…

The step is just one of a cascade of physiological changes that take place in mother and baby during the labor process, including surges in stress hormones and reproductive hormones like oxytocin that may help the fetus adapt during labor, preserve blood flow to the organs, and keep the baby alert and prepared for breast-feeding.

❝During labor, a newborn absorbs maternal microbes into its mouth and gastrointestinal tract…The theory is that maternal microbes “train” the infant’s immune system, so it doesn’t overreact or become destructive and precipitate autoimmune disorders like Type 1 diabetes…

❝Dr. Josef Neu said the broad-spectrum antibiotics prescribed to the mother before a surgical delivery were another concern; the antibiotics can be transmitted to the baby through breast milk if not before birth, decreasing the diversity of natural bacteria.

❝Childbirth and labor are “a physiological process that we’ve evolved to over millions of years,” Dr. Caughey said. “It’s been really well-designed by evolution.”

❝Those living near a landfill complex in suburban St. Louis where an underground fire is burning near Cold War-era nuclear weapons waste say they remain afraid and frustrated despite a government pledge to build a barrier between the two.

❝In the past, tests have found radioactive materials in the complex that were previously unknown to regulators, raising fears that the extent of the contamination — in terms of severity and location — remains unclear. Maintaining that its data is sound, the EPA, which has regulatory oversight over the West Lake Landfill, announced on Dec. 31 that it is moving forward with a plan to build an isolation barrier between the fire and known waste, but many residents and environmentalists are worried that is too little too late…

❝A largely unknown amount of radioactive waste from the Manhattan Project was illegally dumped at the West Lake Landfill in Bridgeton in 1973. In 2010, an underground fire was detected in the adjacent Bridgeton Landfill. Reports ordered by Missouri’s Attorney General — who has sued the landfills’ owner over the state of the complex — suggest that the fire could reach the known radioactive waste in a matter of months…

The EPA, however, is confident in the characterization of the site, according to EPA Region 7 spokesperson Chris Whitley. The agency oversaw additional testing to characterize the extent of the contamination in 2015, but the results are not being released to the public at this time.

❝In response to the announcement, Russ Knocke, a spokesperson for Arizona-based Republic Services, which owns the landfill complex, offered a simple reply to Al Jazeera: “Ready.” The company will partner with EPA to build the barrier. No specific plans, location, or timetable regarding the barrier are being released at this time. The agency made a similar announcement in 2013…

However, as part of its own cleanup program, the Army Corps of Engineers, which has jurisdiction over most of the other contaminated sites in St. Louis, has already unearthed and transported more than a million cubic yards of materials contaminated with radioactive waste out of the area and through Missouri without incident. Many residents living in north St. Louis County want to see the same done with the radioactive waste at the West Lake Landfill.

❝EPA’s announcement regarding the barrier came just days after a new study was released, showing that radioactive materials are migrating from the landfill into the surrounding area.

RTFA. Lots of delightful examples of government flunkies engaged in a contest to see whether passing the buck or ignoring the problem altogether is their best solution. Other radioactivity sources in the region also derive from our government’s dedication to death and destruction. All these now threaten locals instead of foreigners. Anyone surprised?