❝A man, 47, presented with a myriad of symptoms that didn’t add up as he rapidly progressed to respiratory failure and a “profound” white cell count, reported Jason Lee, MD, of the UC Davis Medical Center in Sacramento, Calif., and colleagues.

The patient presented with fever, swelling, and muscle pain that had worsened over the course of a week, they wrote in Chest. Antimicrobial agents were initiated, but the man’s condition deteriorated to the point of respiratory failure and ICU transfer…

Investigations into potential parasitic culprits led to Trichinella antibodies, and he was diagnosed with trichinellosis.

❝Trichinella is a roundworm parasite that lives in infected raw or undercooked meat. The parasites release from their cysts upon exposure to stomach acid and pepsin, and subsequently invade the small intestine where they grow into adult roundworms. Once mature, they migrate to striated muscle, such as the diaphragm…

❝…Recovery from this type of infection is slow and can take several months to years to regain full muscular function…Sometimes you eat the bear; sometimes the bear gets posthumous revenge.

I’ll second that emotion. Poisonally, I don’t believe in hunting other predators.

Thanks to everyone who suggested this – GMTA. 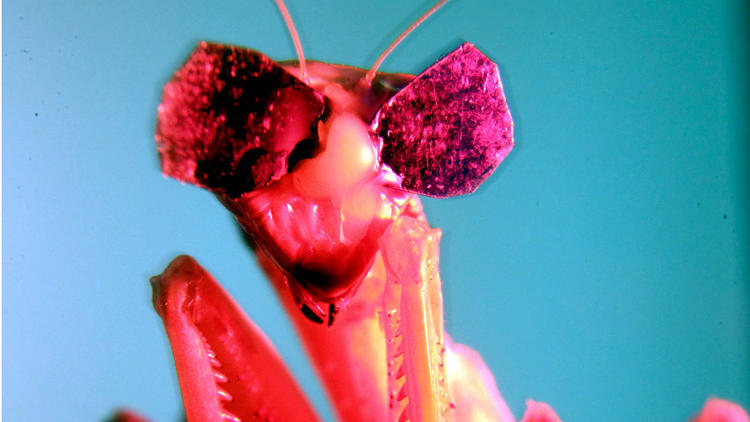 ❝…Scientists have outfitted praying mantises with old-school 3-D glasses and showed them video clips to find out whether these tiny animals can see the world in three dimensions.

The results…show that vertebrate animals — including amphibians, birds and mammals such as humans — aren’t the only creatures sporting stereoscopic vision. The findings could offer new insight into the evolution of this remarkable ability in invertebrate animals, and lead to new algorithms to program 3-D vision into robots.

❝Stereoscopic vision gives us the perspective of depth, allowing us to perceive our world in three dimensions. Each eye has a slightly different focal point, and our brains use that slight difference to calculate the distance to an object. It’s an impressive computational feat, and all kinds of vertebrate animals have been shown to use it. Of course, vertebrates all come from the same lineage, and often have relatively complex neural systems compared with many invertebrates.

❝Invertebrates like insects tend to be smaller, have far simpler visual systems and less neural processing power. And yet many of them appear to have pretty effective visual systems. Take the praying mantis, which is a formidable hunter. How can it stalk and snag other bugs without depth perception?

Experiments in the 1980s indicated that praying mantises did have stereoscopic vision. But that work involved using prisms and partial blinders, which limited the kinds of images that could be shown and how they could be manipulated…

❝To get a new view on this riddle, the researchers actually outfitted the insects with tiny old-school 3-D glasses — you know, the ones with one red lens and one blue lens. For the praying mantises, the lenses were green and blue, because the insects can’t see red very well. The researchers used beeswax and rosin to attach the 7-millimeter-wide, teardrop-shaped shades in front of each eye and then let the movies roll.

When the researchers played 2-D videos of insect-like objects on screens in front of the mantises, the animals didn’t react. But when they played 3-D movies, the insects lashed out in an attempt to nab what looked like a yummy bug…

❝Now that scientists can use more sophisticated techniques to test out 3-D vision in insects, they’ll be able to analyze the algorithms that allow such a simple neural system to achieve this visual feat. And once researchers fully understand these simpler mechanisms, they might be able to program them into robots.

Hey, every little bit helps. Soon, all the folks who are panicky over robotic skills may get their knickers a little tighter into a bunch.

The idea behind the new company, called Health2047, is to “take … our connections with physicians, our content expertise, and apply that in some bridging way to a technology center in Silicon Valley,” said Madara. “That’s what Health2047 is all about.”

❝“What’s been clear to some — but happened so gradually it kind of snuck up on us, is a massive shift from acute to chronic disease [care],” he continued. This movement to chronic disease care “has wavelets that emanate from it,” he continued. “One that’s really critical is a shift in the site of care, from less and less inpatient care to more and more ambulatory care, and now we are detecting a movement from ambulatory care into the home. So these fundamental factors of disease burden are probably going to drive what we need technologically…”

❝The company’s studio…can house 35-40 people and “is packed with interdisciplinary engineers, scientists, and design-led thinking,” Given continued. “Typical prototyping teams will spend 90 days on a project … Bringing together partners and a design engine, we will spin demos and prototypes which we believe will be investable concepts and push those back into the economy. We will work at the system level and do rapid-cycle innovation.”

How does your physician feel about unicorns?