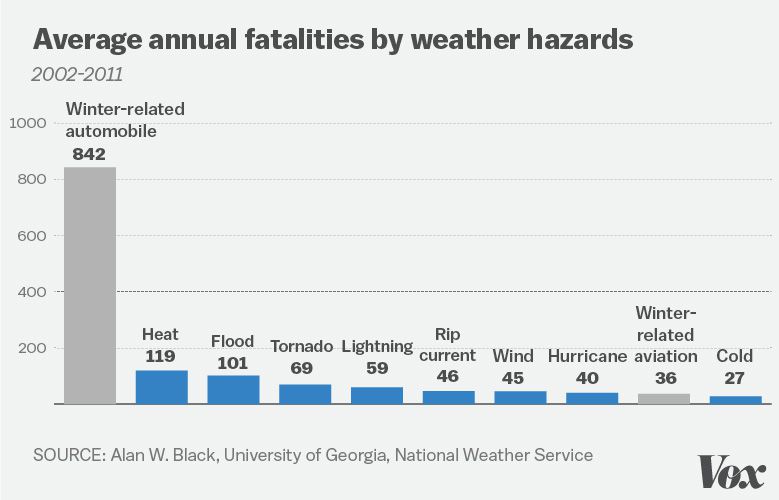 ❝The East Coast might face a massive snowstorm this weekend, one that meteorologists say could be of “historic” proportions.

There are lots of fun things to do during a snowstorm, like drink hot chocolate and build snowmen. But there is one specific thing that pretty much everyone should avoid during a big snowstorm — the thing you should keep in mind as you make preparations for this week.

Do not, if you can possibly avoid it, drive anywhere.

So, be certain you have backup groceries, batteries charged for mobile devices, alternatives on hand for staying warm if and when the power goes out.

We can’t go to your cousin’s birthday party…

❝Amid confusion over new United States visa rules intended to deter terrorists, a British journalist who works for the BBC was denied permission to board a flight to New York at Heathrow Airport on Tuesday because she was born in Iran.

The journalist, Rana Rahimpour, had hoped to surprise her brother in New Jersey this week by appearing at his son’s sixth birthday party with her daughter, but was turned away from her flight because of a new regulation that requires European Union citizens who are dual nationals of Iran, Iraq, Syria or Sudan, or have traveled to those countries in the past five years, to obtain a visa in advance. Other Europeans are able to travel to the United States for up to 90 days through a longstanding visa waiver program.

❝Ms. Rahimpour, who has not been able to travel to Iran for many years because of her work for the BBC’s Persian-language service in London, said in an email that her request for the sort of routine visa waiver that British citizens are entitled to was not denied until she appeared at the airport.

❝Secretary of State John Kerry had assured Iran’s foreign minister, Mohammad Javad Zarif, last month that the Obama administration would try to keep the new rules from penalizing dual nationals or Europeans who wanted to visit Iran for business or tourism after sanctions were lifted as part of the recently completed nuclear accord.

❝“To be told that I can’t fly despite the assurances that Secretary Kerry gave in a letter to Foreign Minister Zarif that this won’t affect ordinary Iranians is just crazy,” Ms. Rahimpour wrote. “Here I am denied a flight, because I am by birth an Iranian citizen — something I can’t change even if I wanted to.”

“I can’t fathom how this helps U.S. security not to mention its image among the Iranian public,” she wrote.

There are two levels of explanation to the problem: first, our bureaucratic chain of communications is less-than-competent. Hey, that’s the way it is.

Second, we’re Americans and whatever we feel like doing to anyone else is OK. USA, USA, USA!

❝Gov. Chris Christie on Tuesday nixed a bill that would have barred carjackers or anyone convicted of gang activity or terroristic threats from owning or purchasing a firearm.

Christie, who’s seeking the Republican nomination for president, failed to act on the bill (A4182) by its end-of-legislative session deadline, effectively killing a measure that received overwhelming bipartisan support in the state Legislature…

That’s called a pocket veto. He has more than bills in his pants, obviously.

❝Under current law, people convicted of certain serious crimes, such as aggravated assault, arson, burglary, homicide, extortion, endangering the welfare of a child, stalking and burglary, are not allowed to own or purchase a firearm in the state.

The bill sought to add people convicted of “carjacking, gang criminality, racketeering and terroristic threats” to that list.

Some people choose intelligent allies. Some pick friends for favors. Some kiss butt because they’re opportunists and cowards. Which one is Christie?

❝A government watchdog agency has filed an objection to Alpha Natural Resources’ proposal to pay executive bonuses of up to $11.9 million in 2016, arguing the bankrupt coal company cannot justify the additional pay at a time when it has recorded steep losses and sought to cut retiree benefits…

Alpha has argued the bonuses are necessary to retain key executives during its Chapter 11 proceedings. But in court filings submitted Friday, the trustee’s office challenged that argument. The government noted Alpha’s request to pay bonuses coincided with a $1.3 billion loss in 2015 and a plan to save $3 million annually by cutting retiree benefits.

“According to Alpha, these executives need these bonuses as an incentive to do the very jobs they were hired to do, that they are already highly compensated for with generous salaries, and which their fiduciary duties compel them to do,” the government wrote. “Such bonuses cannot be justified under the facts and circumstances of this case.”

❝The company filed for bankruptcy protection in August with roughly $4.2 billion in debt. Mining operations have continued as Alpha attempts to restructure its balance sheet and emerge from Chapter 11…

Alpha last recorded a profit in 2011. It’s earnings have been hamstrung in the years since by oversupplied thermal and metallurgical coal markets, stiff competition from natural gas and a large debt burden created by its $7.1 billion purchase of Massey Energy Co. in 2011.

None of whom – obviously, given bankruptcy – deserve a bloody cent.

❝India’s special environmental court has criticised the government for its failure to curb river pollution, a lawyer petitioning the court has said, after scores of bodies surfaced in the Ganges river.

Last week more than 80 bodies – mostly decomposed skeletons and half-burned corpses – surfaced in the river in the northern state of Uttar Pradesh after a drop in water levels.

Their emergence has reignited concerns among environmentalists over the uncontrolled practice of body disposal in the Ganges by Hindus, who consider the river to be sacred.

❝On Monday the National Green Tribunal, a court set up to look at environmental grievances, ordered both the water resources and environment ministries to explain who should be held responsible for the pollution in the Ganges…

❝Millions visit places along its banks, such as the sacred city of Varanasi, to cremate their dead and scatter their ashes in the river.

Others bathe in the Ganges in an act of ritual purification, believing the river cleanses them of sin and frees them from the cycle of rebirth.

Authorities say the corpses in the Ganges are the deceased from poor families who cannot afford to buy enough firewood for cremation and are forced to immerse the half-burned bodies of their loved ones in the river.

Unmarried women and children are often buried in shallow graves along the riverbank, and their remains can be washed into the river when water levels rise.

❝Bansal said at least 3,000 bodies were recovered from the Ganges annually, yet the government had remained a “mute spectator” to the health risks of cremations and burials along its banks.

Exactly the kind of reason requiring the separation of religion from the civic responsibilities of government.