❝Britain’s motorways should be lined with wind turbines because they are already unattractive and very few people live alongside them, according to Baroness Brown, the UK’s green energy ambassador.

Wind farms built along the 2,300-mile motorway network would generate less local opposition than those constructed in unspoiled rural areas, predicted Baroness Brown, an independent peer in the House of Lords.

“You don’t really want to live beside a motorway – it’s not good for you and it’s noisy. I do a lot of driving up the east side of the country and I wonder why we don’t line the sides of our motorways with wind turbines…

“We haven’t got infinite space and you have got to be sensitive about where you put these things. But motorways seem like an ideal location…”

Seems like a good idea here in the US, as well. Think they’d spoil the view driving through Secaucus on the New Jersey Turnpike?

❝The cost of onshore wind power has plummeted in recent years and is now the cheapest of all electricity sources. But the Government has made it difficult for new onshore windfarms to be built despite them offering the best way to meet ambitious climate targets in an affordable way.

Many stretches of motorway are not windy enough to power turbines, experts warn. But other parts of the motorway network provide plenty of scope for wind farms, they say, such as the 152-turbine Clyde array on either side of the M74 near the Lanarkshire village of Abington and the 11-turbine Swinford complex by the M1 in Leicestershire. The turbines on windfarms such as these have to be set back from the motorway so they don’t fall on to it if they keel over.

Hopefully, the Brits – and other folks – are capable of erecting wind turbines that don’t fall over onto freeways. Unlike our out-of-repair bridges.

❝The first state bills of the year that would interfere with science education have appeared in Oklahoma. There, both the House and Senate have seen bills that would prevent school officials and administrators from disciplining any teachers who introduce spurious information to science classes.

These bills have a long history, dating back to around the time when teaching intelligent design was determined to be an unconstitutional imposition of religion. A recent study showed that you could take the text of the bills and build an evolutionary tree that traces their modifications over the last decade. The latest two fit the patterns nicely.

❝The Senate version of the bill is by State Senator Josh Brecheen, a Republican. It is the fifth year in a row he’s introduced a science education bill after announcing he wanted “every publicly funded Oklahoma school to teach the debate of creation vs. evolution…”

The one introduced in the Oklahoma House is more traditional. Billed as a “Scientific Education and Academic Freedom Act” (because freedom!), it spells out a whole host of areas of science its author doesn’t like…

❝The bill…ensures educators can just teach whatever they want as long as they think it’s science, and nobody can discipline them. Students, meanwhile, cannot be penalized if they “subscribe to a particular position on scientific theories.”

As usual, if your particular flavor of fundamentalist hooey favors a Flat Earth or the sun revolving around the Earth it’s OK. Want to teach the kiddies scumbag theories about natural subservience for women or ethnic minorities? No harm, no foul.

❝For as long as we’ve been around, humans have lived with insects. From the earliest cave dwellings to modern-day McMansions, it’s been impossible to find a human dwelling that’s insect-free. But surprisingly little is known about the bugs thriving in the cracks and crannies of our homes.

So recently, entomologists completed what they say is the first census of the arthropod (a classification that includes insects and spiders) species that live in the typical American home. Assessing 50 houses in the vicinity of Raleigh, North Carolina, they found a stunning diversity of critters.

Here’s a graphic summarizing all the types of arthropods they found on average: 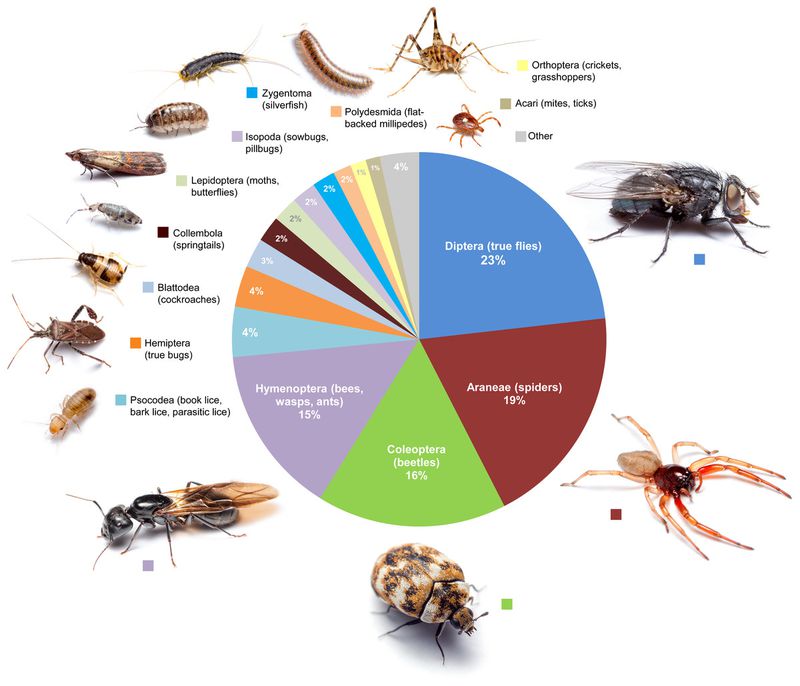 Say hello. These are your true neighbors.

❝On average, each house hosted 62 different arthropod families, for an average of 93 different species per home. Some homes had as many as 211 species. The authors stress that this is likely a conservatively low estimate, since they only assessed the room in each house that hosted the greatest number of species.

And, yes, every home contained arthropods. Of the 50 houses researchers studied, they found only five rooms that seemed to be bug-free…

❝Most of the insects in our homes aren’t pests.

Of the 93 species found, surprisingly few of them were what we’d typically consider pests: cockroaches, fleas, bedbugs, termites, etc. “In fact,” the authors write, “we found a relative dearth of typical household pests.”

Indoors diversity was greater than expected. As is often the case outdoors.

Admittedly, I only grazed through the article searching for an answer to the first question that came to mind – what time of year did they do the study. I presume it’s in there somewhere. In my experience, the insect population varies with the season. Especially the increase, say, in spiders with the approach of cold weather. We always are reminded in New Mexico of the imminence of autumn when Black Widow spiders start moving in.