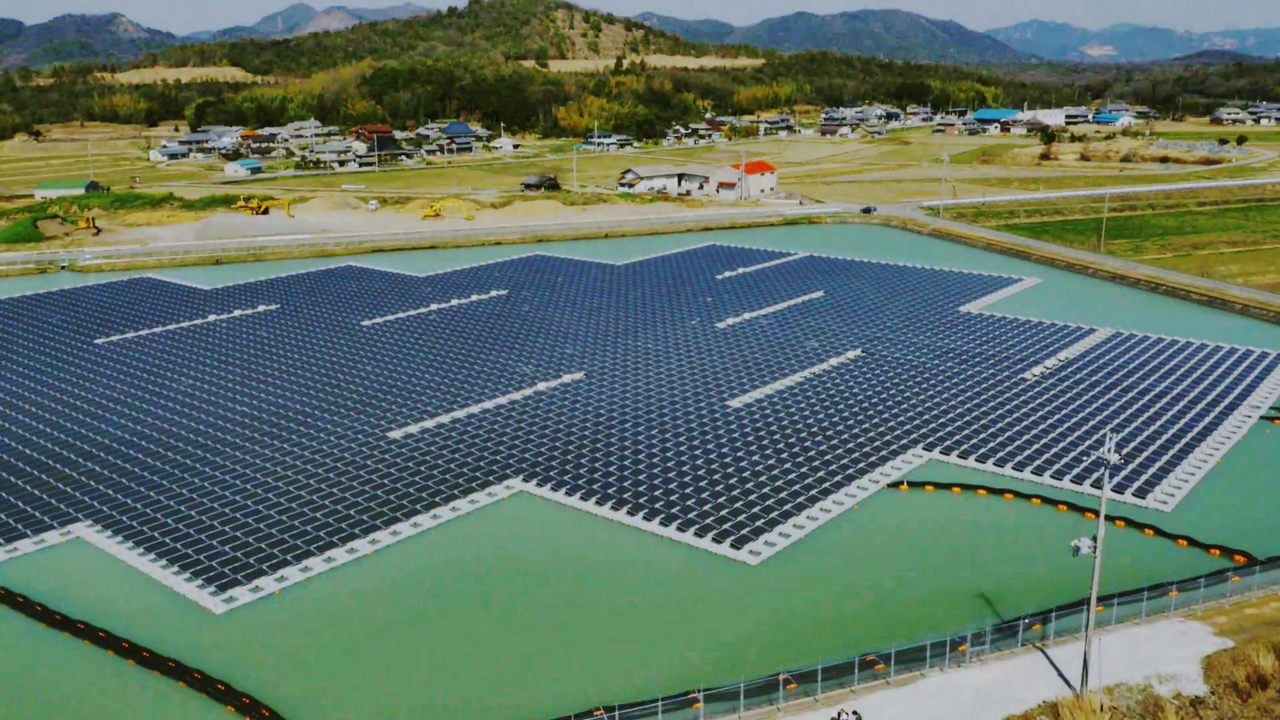 ❝The Japanese electronics multinational Kyocera has begun work on what it says will be the world’s biggest floating solar farm.

The power plant is being built on a reservoir in Japan’s Chiba prefecture and is anticipated to supply enough electricity for nearly 5,000 households when it is completed in early 2018.

Space-starved Japan has already seen several floating solar farms built as part of the country’s drive to exploit more renewable energy in the wake of the 2011 Fukushima disaster. The shutdown of nuclear plants has seen Japan increasingly reliant on fossil fuel imports that have hit its emissions-cutting ambitions.

❝The Yamakura dam power plant will see more than 50,000 solar photovoltaic panels cover a 180,000 m sq area, but compared to other land-based plants it is relatively small. At 13.7MW when finished, it would not make the top 100 of the world’s largest solar photovoltaic farms…

❝Kyocera has already built three floating solar farms, which are much smaller than the new one…

Context is everything. Space constraints have made Japan a world leader in many space efficiencies. Americans are just discovering tiny house living. It’s a way of life for millions in Japan. The same is true for reuse, repurposing technology. It’s already not unusual to find large battery packs designed for electric cars or plug-in hybrids being reused as backups and storage for home solar panel arrays. They’re already used beyond flexible storage requirements for mobile use – and perfectly fine for such a repurposing.

❝Back when Ted Cruz first floated his claim that the Fed caused the Great Recession — and some neo-monetarists spoke up in support — I noted that this was a repeat of the old Milton Friedman two-step.

❝First, you declare that the Fed could have prevented a disaster — the Great Depression in Friedman’s case, the Great Recession this time around. This is an arguable position, although Friedman’s claims about the 30s look a lot less convincing now that we have tried again to deal with a liquidity trap. But then this morphs into the claim that the Fed caused the disaster. See, government is the problem, not the solution! And the motivation for this bait-and-switch is, indeed, political.

Now come Beckworth and Ponnuru to make the argument at greater length, and it’s quite direct: because the Fed “caused” the crisis, things like financial deregulation and runaway bankers had nothing to do with it…

❝I’d just add that if there were anything to this story, we should have seen a sharp increase in long-term real interest rates, as investors saw the Fed getting behind the disinflationary curve. Here’s the real 10-year rate in the months leading up to Lehman:

❝Do you see the kind of spike that could cause a catastrophe?

Objective analysis of the cultural costume jewelry adhering to today’s excuse for conservatism automagically includes self-delusion and outright lies. The incidence of the Great Recession following on from fraud and investment hustles brings us to a repeat of an older, long-standing conservative character flaw. They take responsibility for nothing.

The Anaheim Police Department has acknowledged in new documents that it uses surveillance devices known as Dirtboxes — plane-mounted stingrays — on aircraft flying above the Southern California city that is home to Disneyland, one of the most popular tourist destinations in the world.

According to documents obtained by the American Civil Liberties Union of Northern California, the Anaheim Police Department have owned the Dirtbox since 2009 and a ground-based stingray since 2011, and may have loaned out the equipment to other cities across Orange County in the nearly seven years it has possessed the equipment.

“This cell phone spying program — which potentially affects the privacy of everyone from Orange County’s 3 million residents to the 16 million people who visit Disneyland every year — shows the dangers of allowing law enforcement to secretly acquire surveillance technology,” says Matt Cagle, technology and civil liberties policy attorney for ACLU-NC

Stingrays and Dirtboxes are mobile surveillance systems that impersonate a legitimate cell phone tower in order to trick mobile phones and other mobile devices in their vicinity into connecting to them and revealing their unique ID and location. Stingrays emit a signal that is stronger than that of other cell towers in the vicinity in order to force devices to establish a connection with them. Stingrays don’t just pick up the IDs of targeted devices, however. Every phone within range will contact the system, revealing their ID.

The use of stingrays by local law enforcement agencies has been widespread for many years. But the use of the more invasive Dirtboxes has largely been limited to federal law enforcement, though at least two large cities were known before to be using them…Subsequent news reports revealed that Los Angeles and Chicago local police departments possessed Dirtboxes as well. Anaheim is the smallest city known to have one.

Dirtbags using dirtboxes. Something poetic about that, I guess.