As the nation begins the process of electing a new president, the roles of the Republican and Democratic parties are undergoing fundamental shifts that are threatening their impact on both elections and policy.

Built in the 19th century, grown dominant in the 20th, they are largely out of date in this new age.

Folks ignorant of American political history need to know that up through the end of World War 2 alternative parties, third parties, even radical parties were often successful forces in local, state and national politics. Part of the purpose of McCarthyism and the domestic portion of the Cold war was the suppression of independent electoral politics. Americans have been thoroughly brainwashed into believing 2-party politics is God’s Will, the core of constitutional freedom.

They – the 2 old parties – still control the ballot and machinery such as the primaries. But they do not hold the loyalty of the people. The largest party in America now is no party – with the ranks of people calling themselves independents at the highest level in more than 75 years of polling. The parties do not control the message. People learn about politics from social media instead of traditional means such as mailings or campaign rallies. And the parties are no longer the sole banker of politics. Big-money interests now effectively create shadow parties with extensive networks of donors of their own.

The result: People are tuning out and turning away.

In 2012, average voter turnout for statewide primaries for president, governor and U.S. Senate plunged to its lowest level since the modern primary system became popular in 1972…

Just 29 percent called themselves Democrats last year, it found, “making it safe to conclude that the current (number) is also the low point in Gallup polling history.” Republican loyalty was only 1 percentage point above its recent low of 25 percent three years ago.

The bloc of independents reached 40 percent in 2011, and it has stayed at or above that level ever since…

Most indifferent to parties: young Americans. Nearly half the millennials identified as independents in 2014, Pew found, more than the combined total of those willing to be called either Democrats or Republicans…

Historically, children adopted their parents’ political views, including identification with the two major parties. Not anymore.

Millennials get information from sources other than from family dinners, neighbors or campaign brochures. If something piques their interest, they turn to Twitter, text messaging, The Skimm and other modern forms of instant communication…

Political parties are seen as too narrowly focused, too interested in keeping incumbents in office.

They gerrymander congressional districts to maximize their chances so that election after election only a handful of House of Representatives races are true contests. Of the House’s 435 seats, 402 incumbents are considered safe bets for re-election this year, said the nonpartisan Rothenberg & Gonzales Political Report.

The parties now thrive by firing up the fringes. Republicans once had a strong bloc of abortion-rights supporters, for example, but in 1976 the party formally included in its platform support for a constitutional amendment “to restore protection of the right to life for unborn children.”

It’s now unmistakably the anti-abortion party, the comfortable home for conservatives and therefore the party that dominates the South and the Rocky Mountain West. Democrats are the party of the Northeast and the West Coast…That generally includes lots more folks with better than a 6th grade reading level.

While independents are gaining clout, so are the big-money groups that now operate as virtual political parties…Take Freedom Partners, an organization sponsored by brothers Charles and David Koch of Wichita, Kansas. Last year, the group committed to spend $889 million on politics and policy in 2015 and 2016…

And the Koch network does more than just spend money. Twice each year it hosts about 400 executives, who pay dues of $100,000 each, for meetings on politics and policies. And its spending goes beyond the planned $250 million to help candidates, to include grants to organizations to help promote small-government policies as well as college scholarships and fellowships.

As Peter White, a cabin manager in Nottingham, N.H., put it, “You feel the two parties both work for Wall Street and don’t care who wins.”

The chunk of the article I left out is mostly ideological pimping for the wonders of middle-of-the-road folks who feel left out nowadays. They still are the group the two old parties try to rope into obedience. True independence of thought and progress – which includes fiscal conservatism as often as progressive social and structural reforms – scares the crap out of party loyalists of either Republican or Democrat flavor.

Segments of the discussion about new media, the facile communications available with amazing speed, nowadays, are something everyone now understands as part of the matrix of coming change. Personally, I think the biggest significant conflict still lies between top-down leadership and grassroots activism. Conflicts as critical to the Left as the Right – though I think the Leftish flavor of populism, equal rights and personal liberty will succeed in grassroots building. Rightwing ideologues ranging from Ayn Rand out-of-date to Ted Cruz/Donald Trump out-of-date should fail and will.

❝Around 20 cars sank into a lake in Wisconsin…after visitors to a winter festival parked on its frozen top.

Since parking was scarce in the area, officials had allowed people to park on the frozen lake, but the ice cracked under the weight of the vehicles during the judging of the the U.S. National Snow Sculpting Competition…

So, officials said parking was allowed. Did any of them say it was safe? In front of witnesses. 🙂

❝How did America get to a point where legal opioid painkillers, marketed as medicine, killed nearly 19,000 people in 2014?

One alarming explanation is that the drug companies behind these opioids wanted more people to buy their product, so they led a misleading campaign to get doctors to prescribe their drugs.

The result: Drug companies profited as more and more people got addicted and died of overdoses. This chart, from a 2015 study published in the Annual Review of Public Health, tells the story: 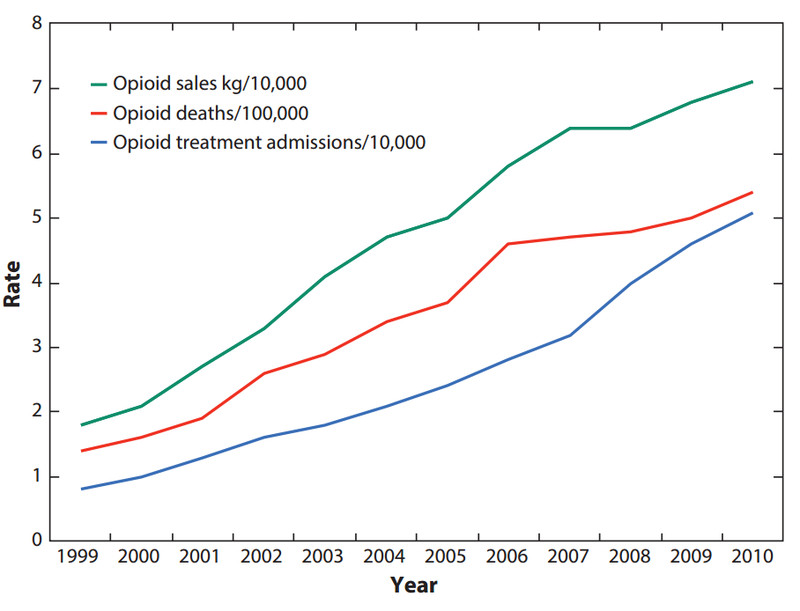 ❝…The opioid epidemic began in the 1990s when doctors prescribed a tremendous amount of opioid painkillers to help treat pain — a serious problem, given that chronic pain alone afflicts about 100 million Americans.

But one reason doctors were so willing to prescribe these painkillers, despite the clear risks of addiction and overdose, is heavy marketing from the pharmaceutical industry.

Between 1996 and 2002, Purdue Pharma funded more than 20,000 pain-related educational programs through direct sponsorship or financial grants and launched a multifaceted campaign to encourage long-term use of opioid painkillers for chronic non-cancer pain. As part of this campaign, Purdue provided financial support to the American Pain Society, the American Academy of Pain Medicine, the Federation of State Medical Boards, the Joint Commission, pain patient groups, and other organizations. In turn, these groups all advocated for more aggressive identification and treatment of pain, especially use of opioid painkillers.

Often, these campaigns propagated highly misleading claims — including assertions that OxyContin and other new opioid painkillers were safer than other medications on the market.

The claims were so misleading, in fact, that Purdue Pharma eventually paid hundreds of millions of dollars in fines for them…

❝Purdue learned from focus groups with physicians in 1995 that doctors were worried about the abuse potential of OxyContin. The company then gave false information to its sales representatives that the drug had less potential for addiction and abuse than other painkillers, the U.S. attorney said.

But in the midst of the misinformation campaigns, doctors prescribed hundreds of millions of prescriptions for opioids — in 2012, enough to give a bottle of pills to every adult in the country. And as people became addicted to opioid painkillers, they also began turning to a cheaper, more potent opioid — heroin — to satiate their cravings.

The result: In 2014, there were a record 47,000 drug overdose deaths in the US, nearly two-thirds of which were opioid-related, according to federal data. And all along the way, drug companies made a lot of money.

Purdue Pharma and company officials were ordered to pay fines totaling over $600 Million in 2007 for false advertising. A lawsuit by the state of Kentucky could have resulted in another $1 billion added to payment for their crimes. The Republican attorney general settled for $24 million. Perhaps the fact of his law firm representing Purdue had something to do with that.

No officials have ever been charged with crimes. They’ve only killed thousands. Barely up to the level of many of our presidents.