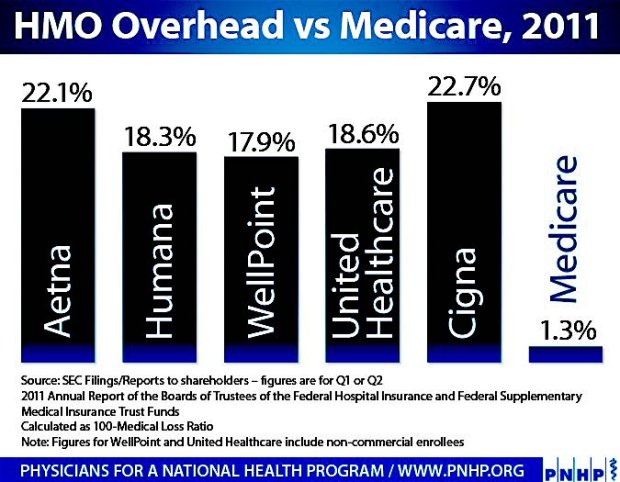 ❝ National health insurance has become a defining issue in the contest for the Democratic nomination. Bernie has put “Medicare for all” squarely back on the table. Hillary calls that pie-in-the-sky: instead, she would build on the Affordable Care Act…As she says, market-based private insurance was originally her idea.

❝ We can all agree that the ACA has benefited many, particularly the poor and the sick.

But Medicare for all has picked up some interesting supporters: for example, Fareed Zakaria, a high-profile TV commentator whose beat is foreign affairs, and Donald Berwick, MD, who, as administrator of the Centers for Medicare and Medicaid Services, supervised the roll-out of the ACA.

Moreover, the Kaiser Family Foundation December 2015 Tracking Poll demonstrates majority support among ordinary Americans – 58%; a 2014 survey of physicians and medical students in Maine showed that many doctors also (in Maine at least) would prefer single-payer, especially those practicing primary care.

So it is disappointing that liberal economists whom I respect, such as New York Times columnist and Nobel laureate Paul Krugman, conclude that single-payer would be too expensive and too disruptive — that we should improve the ACA instead.

❝ Krugman, of course, is trained to crunch numbers — I can’t. But from the exam room where I sit, his conclusion doesn’t make sense. The principal advantage of single-payer, after all, is that it is less expensive than our market-based system.

That is not just idle speculation: every other developed nation has either some form of single-payer or highly regulated private insurance with price controls — and they all achieve better health outcomes, with genuinely universal coverage, for at least 30% less (as a fraction of the Gross Domestic Product) than we do, even though we still cover something less than the entire population.

❝ Perhaps the economists simply substituted Treasury payments for employers’ contributions to their employees’ health insurance (something the ACA was specifically designed to preserve), and left everything else in place: that would indeed be a huge hit to the federal budget, particularly since employers, representing a large group of mostly healthy employee families, can negotiate better deals with insurers than individuals can.

But that is not how Medicare for all would work. Instead, it would be like Medicare today, improved to make it even less expensive for the Treasury and individual beneficiaries. Since everyone would receive the same, comprehensive benefits, administrative costs would be much lower. The huge transaction costs engendered by the ACA — hundreds of thousands of annual negotiations between insurers, doctors, hospitals, pharmaceutical benefit managers, and manufacturers — would decline significantly…

❝ Finally — and most controversially — Medicare, which currently sets prices for doctors and hospitals, would extend price controls to other health services, such as prescription drugs and devices, through open procedures with due process and opportunity for comment as mandated by the Constitution. Or Medicare could negotiate prices, as the Department of Veterans Affairs currently does.

I didn’t include the whole article. The core is here. RTFA for details – which further illustrate the benefits of Dr. Poplin’s proposal. I’m pleased she included mention of the negotiations already standard procedure for the Department of Veterans Affairs. Nothing new. Part of normal operations for years resulting in significant cost savings.

Speaking of costs, you should take notice of the history of what’s accepted as standard in the medical-industrial complex vs federal government management of Medicare or, say, Social Security. Administrative costs to civil service managers run in general less than 3% to run those programs. Insurers bag taxpayers 15-25% for the same kind of work.

A cost I look forward to seeing brought down to the level of existing entitlements.