❝ The Canadian government will introduce legislation next year that would make the sale of marijuana legal, its health minister has said.

If enacted, the move would make Canada one of the largest Western countries to allow widespread use of the drug…

Prime Minister Justin Trudeau pushed for legalisation during his campaign.

❝ The announcement coincided with 20 April – an unofficial holiday among cannabis advocates. Hundreds of marijuana users demonstrated outside Parliament in Ottawa on Wednesday.

Medical use of marijuana is already legal in Canada. Some have argued that legal marijuana would reduce stress on Canada’s criminal justice system.

“We will work with law enforcement partners to encourage appropriate and proportionate criminal justice measures,” Health Minister Jane Philpott said. “We know it is impossible to arrest our way out of this problem.”

“We control who it’s sold to, when it’s sold and how it’s used,” Mr Blair said likening marijuana to how alcohol is regulated. “And organised crime doesn’t have the opportunity to profit from it.”

Of course, American Liberals don’t read furrin newspapers, don’t watch much more than network TV – so, they won’t know about this. American Conservatives don’t read at all. They sit and wait in front of black-and-whte TVs waiting for news about America’s world domination to return.

❝ Aerojet Rocketdyne’s operation in Redmond, Wash., has won a $67 million contract from NASA to design and develop an advanced electric propulsion system that could power future trips to an asteroid and Mars.

The goal of the 36-month project is to deliver an integrated system that could improve fuel efficiency by a factor of 10 over today’s chemical rocket propulsion systems, and double the thrust capability of current electric propulsion systems.

❝ Solar electric propulsion already has been used experimentally on several NASA probes, including Deep Space 1 and the Dawn orbiter that’s currently circling the dwarf planet Ceres. Solar arrays on the spacecraft generate electrical power, which is used to produce positively charged ions and accelerate them through an electric field. After acceleration, electrons are injected into the ion beam to maintain a neutral plasma…

Engineers at NASA’s Glenn Research Center in Ohio have pioneered electric propulsion, and they’ll be working with Aerojet on the propulsion project. So will engineers from NASA’s Jet Propulsion Laboratory.

RTFA for more details. One of my sci-fi favorites coming to fruition. Hah.

❝ New York City Prison Barge, The Vernon C. Bain Center, is an 800-bed jail barge that is designed to handle inmates from medium- to maximum-security in 16 dormitories and 100 cells. It resides on the East River approximately one mile west of SUNY Maritime College.

❝ The barge falls under the New York City Department of Corrections and is part of the vast Rikers Island jail complex, the world’s largest penal colony. The prison barge was built in New Orleans for $161 million and brought to New York in 1992 to reduce overcrowding on the island’s land-bound buildings. Since the jail is not permanently moored to the shore, Coast Guard regulations require that she have 3 maritime crew on board at all time, including a mate, an engineer and an oiler.

Class-ridden NYC at its typical best. Let’s find an efficient and cheap way to warehouse folks we deem to be criminals. Rikers’ reputation for murder, rape, beatings, maltreatment and subhuman conditions is world-class.

One old gangbanger mate of mine was a screw at Riker’s for decades. He finally transferred to the Transit Coppers to regain his sanity. 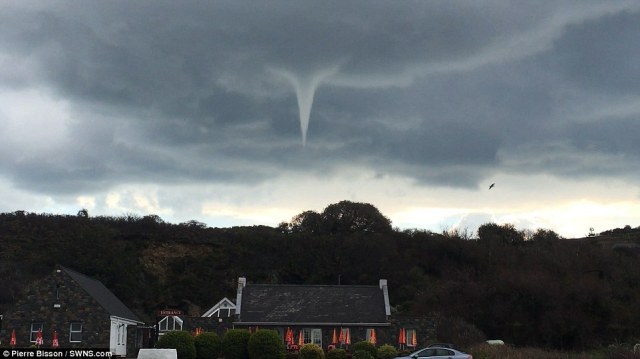 This dramatic footage shows a huge tornado-like funnel cloud that formed over part of Britain.

The video was captured by photographer Pierre Bisson, 48, while he was out cycling on Sunday morning in Guernsey. An island in the English Channel.