❝ J.K. Rowling was thrilled when black actor Noma Dumezweni was cast as adult Hermione Granger back in December, but sadly, many less open-minded people on Twitter weren’t. Several Harry Potter fans were upset that Hermione, who had been played in the films by Emma Watson, was now black in The Cursed Child play, but Rowling hit back, stating, “Canon: brown eyes, frizzy hair and very clever. White skin was never specified. Rowling loves black Hermione.”

❝ And with Harry Potter and The Cursed Child set to open in London on Tuesday, Rowling once again threw her support behind Dumezweni and dismissed the critics of the casting as “a bunch of racists.”

“Noma was chosen because she was the best actress for the job,” Rowling said in an interview with The Observer. “I had a bunch of racists telling me that because Hermione ‘turned white’ – that is, lost colour from her face after a shock – that she must be a white woman, which I have a great deal of difficulty with.

“But I decided not to get too agitated about it and simply state quite firmly that Hermione can be a black woman with my absolute blessing and enthusiasm,” Rowling said.

❝ The Harry Potter author…was sad to say she was unsurprised by the reaction to Dumezweni’s casting.

“With my experience of social media, I thought that idiots were going to idiot. But what can you say? That’s the way the world is,” Rowling said.

Some of the worst stupid practices of our species will take centuries to lose. Racism, no doubt, is at the head of the list.

I posted a quick outtake around the time this happened. Now, clearer photos are showing up online. 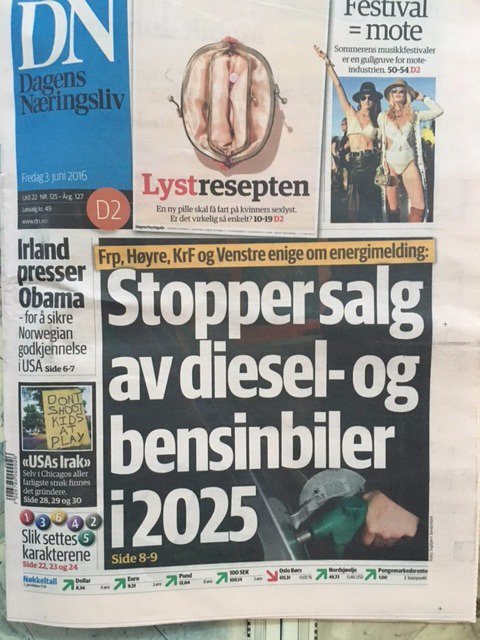 ❝ An all-electric future may be closer than you think — at least if you live in Norway. The country’s four leading political parties have reportedly agreed to a plan to stop selling gasoline-powered cars by 2025…

❝ Norway was the first European country to get Tesla charging stations, and in April 2015, the country reached its target of registering 50,000 electric cars by 2018, beating its deadline by two years. About one in four cars sold there is electric.

❝ Norway is also one of the world’s top oil exporters, pulling in billions from the production and sale of oil and gas. However, the Norway’s gargantuan sovereign wealth fund has been divesting from fossil-fuel companies over the past few years.

The role model for commodities-exporting nations with brains. Use the profits from geologically-limited resources to build an infrastructure no longer dependent upon those materials, eh?

A view of the future.