❝ More women are dying in childbirth in the US than in any other developed country. And experts say the problem is likely to keep getting worse.

You can see how alarming the issue is in this chart. In other countries, maternal death rates have fallen sharply since 1990. In South Korea, the rate of women dying in childbirth fell from 20.7 deaths per 100,000 live births in 1990 to 12 today. In Germany, it dropped from 18 to 6.5.

But in the United States, the opposite is happening. The rate of women dying in childbirth is going up. 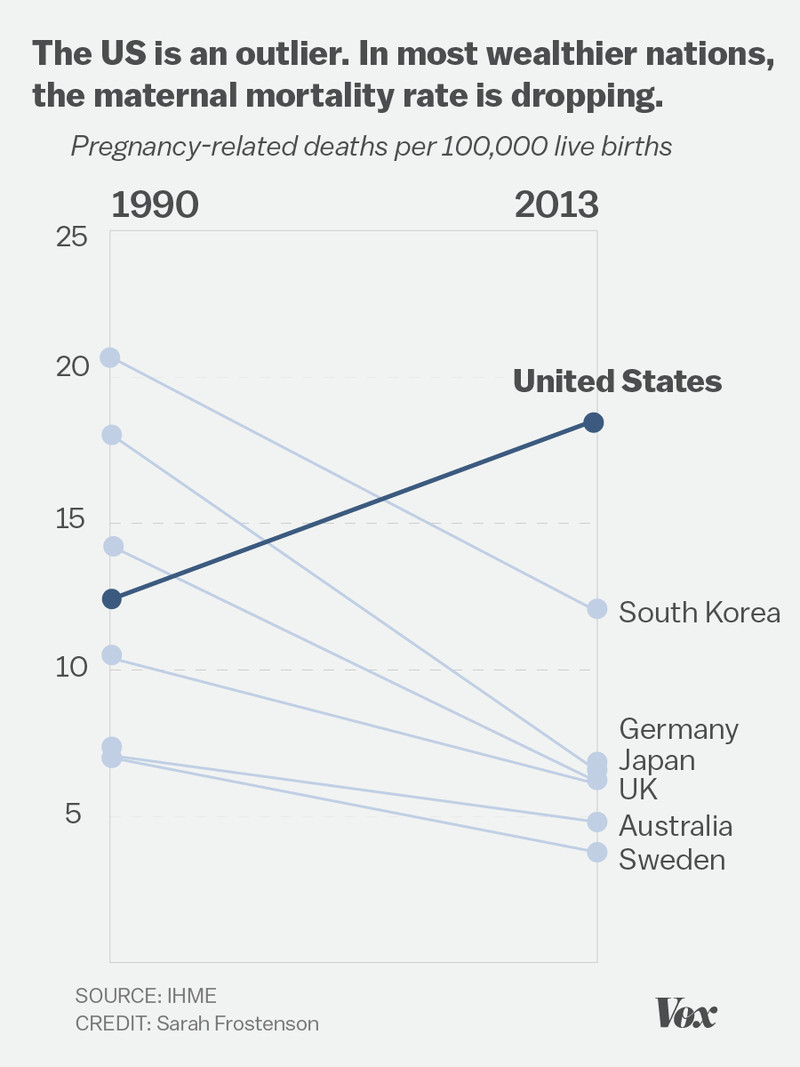 ❝ This wasn’t supposed to happen. During the 20th century, the maternal death rate in the United States dropped from 607.9 deaths per 100,000 births in 1915 to 7.2 in 1987. But over the past 30 years, the maternal mortality rate trend reversed and steadily marched upward.

❝ Pregnancy-related deaths are still rare events in the US; only about 700 women die out of 4 million live births annually. But the US is one of the few rich countries in the world where maternal mortality is steadily rising. The maternal mortality rate has more than doubled since 1987, the first year the Centers for Disease Control and Prevention began collecting data through its pregnancy mortality surveillance system.

And experts are just now understanding why this is happening — why the United States looks so different from other countries, and why so many more new mothers are dying. They think maternal deaths are rising because of the rising toll of chronic diseases.

❝ Thirty years ago, women died in the delivery room because of hemorrhages and pregnancy-induced blood pressure spikes. Now they are much more likely to die because of preexisting chronic conditions like heart disease or diabetes…

❝ “It’s a larger problem than just dealing with women during pregnancy, it’s the health of our society,” said Dr. William Callaghan.

Too bad for women. Too bad for everyone. Especially if you’re Black, btw.

RTFA, understand the sum of variables collectively affecting the life of a Black woman. They are two or three times more likely to die of complications during pregnancy and delivery.

Please, don’t forget we only had a window of a couple of years in the decades since a small number of politicians first proposed National Health Insurance in the United States – and actually got it passed. Don’t forget one of the two laggard political parties we have – will be campaigning right up to Election day this year to overturn that one significant victory for public health achieved in Obama’s first term.