❝ Astronomers have confirmed the existence of semi-intelligent alien life with the discovery of an interstellar LinkedIn message.

The invite came from a star in the Hercules constellation and included a request to swap notes on ‘new and exciting ways’ of using Powerpoint.

❝ Professor Henry Brubaker, of the Institute for Studies, said: “This proves that we are not alone in the universe but we will probably spend a lot of time pretending we are.

“I’d always dreamt that first contact would be a sublime moment of consciousness meeting consciousness across the inky void of space but instead I’m going to have to pretend I haven’t checked my telescope for messages.”

❝ The race is now on to develop a spam filter for messages from distant planets to avoid other alien civilisations thinking humans are an easy touch and bombarding Earth with special offers for Wowcher and 38 Degrees petitions to sign.

Everyone tries to recreate The Onion. Not a bad job on this one – albeit aimed mostly at geeks.

And it did make me smile.

❝ Solar advocates finally got a win in the Sunshine State on Tuesday, as voters approved a measure to get rid of property taxes on solar equipment.

❝ It’s not surprising that the measure passed, although the overwhelming support was a morale boost for the industry, which has faced hurdles in Florida. Amendment 4 received 72 percent approval overall — and needed only 60 percent to pass…

Supporters are hoping the tax break will spur companies such as Walmart, IKEA, and Costco, which have made massive investments in solar elsewhere in the country, to install solar panels on their Florida stores. It will also allow solar leasing companies such as SolarCity to improve their margins.

❝ According to the Solar Energy Industries Association, a Washington, D.C.-based industry group, Florida has the third-most potential for solar in the country, but it is only 14th in amount of installed solar — even while installing 90 percent more solar in the past year. Massachusetts, Colorado, and North Carolina all have more installed solar.

Not that Republicans, Blue Dog Democrats and other fossil fuel pimps have given up. They still have Amendment 1 on the horizon for November.

❝ If Amendment 1 passes, it will prohibit Floridians from selling their electricity to third parties. In effect, it would do away with Floridians’ rights to lease solar panels, since, in that situation, the owner of the panels generally sells the electricity to the homeowner. Leasing solar systems has been an effective and popular way to allow homeowners to go solar without paying for the system up front…

Amendment 1 will also face a 60 percent threshold for approval, but there is expected to be a significant media campaign encouraging people to vote yes on 1.

What? You actually believe the Trumpkin crap that the owners of mass media are all lefties and liberals. Don’t kid yourself. They believe wholeheartedly in kissing the butt of corporate advertisers. 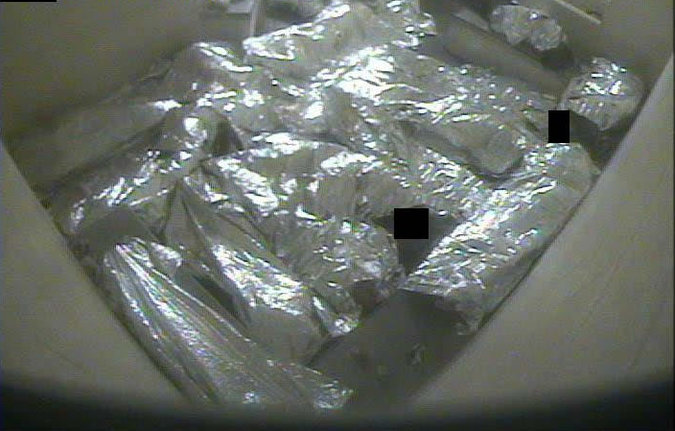 ❝ For more than two years, the Border Patrol has assured the public that its processing facilities, while cramped, are perfectly sanitary places to hold migrants found in the country illegally. On the rare occasions when their facilities were put into public view, the cells were sparkling, empty and warm.

❝ Recently, for the first time in the Border Patrol’s history, images of the occupied cells were unsealed as part of a federal court case. Several images show dozens of men crowded into a single cell while nearby cells remain empty. Photos show people sleeping on benches or the concrete floor while bedding is available, unused, in adjacent cells.

The images do not show a thermometer, but appear to support migrants’ accusations that the facilities are kept at conditions so cold that they have earned the name hieleras — Spanish for iceboxes. Detainees huddle in some images; a row of legs in another image can be seen sticking out from under a Mylar emergency blanket.

Women and children are supposed to be given a mat and a blanket when they enter the processing facilities. The images, which were taken from security camera footage last summer, show women and children in a cell without adequate bedding, wrapped in emergency blankets.

❝ Processing centers are not the major detention facilities like in Artesia, N.M., or Eloy, Ariz., where federal immigration authorities have held migrants for months. Instead, the centers are designed to hold people for only a few hours, though their detentions can sometimes stretch to days…

❝ The National Immigration Law Center and other organizations, including the American Civil Liberties Union of Arizona, allege the conditions in the cells are so deplorable that it is unconstitutional…The lawsuit also accuses the Border Patrol of actions that cannot be documented on camera, such as not allowing detainees to shower or providing them access to basic sanitation and hygiene, including toothbrushes.

❝ The Border Patrol fought the release of the images…But U.S. District Court Judge David C Bury ruled against them and the…video stills were unsealed by the court.

All-American xenophobes and populists don’t give a damn about how one of our police agencies treats people in custody. Which is as stupid as most of their politics. Sooner or later, the truth will manage to get out and the whole world ticks off one more box on the checklist of American officials demonstrating their white supremacist mindset.