File this one under “too good to check.” Max Ehrenfreund passes along the latest analysis of Paul Ryan’s tax proposal from the Tax Policy Center and notes that by 2025 it gets a wee bit lopsided:

This is like a parody of Republican tax proposals. In its first year, the top 1 percent start off getting a mere 76 percent of the benefit….Within ten years they get nearly 100 percent of the benefit. Ryan and the congressional Republicans manage this by giving the poor and middle class nothing and actually taking money away from the upper middle class. The only people who benefit are the rich and the really rich.

As for the really, really rich, the top 0.1 percent get an average tax break of $1.4 million, while the rest of us get about $3 trillion in extra federal debt and no long-term change in economic growth. What a deal.

More craptastic politics from the least productive hacks in Washington, DC. I honestly think Ryan trots his spreadsheet out with a new set of lies every couple of years just so Congressional Republlicans can say, “look, we have a proposal!” – even though it’s about as useful as a new crutch to someone who just had his legs amputated.

❝ An investigator “with a bit of free time” decided to send for testing DNA samples from a long-dormant cold case, which led authorities to arrest a pair of men linked to the 1973 shotgun slayings of two young girls, authorities said.

Police in Oklahoma and California arrested the two 65-year-old suspects Tuesday morning for the murders of Valerie Janice Lane, 12, and Doris Karen Derryberry, 13.

❝ The seventh grade classmates told their mothers they were going to a mall shopping near their homes about 40 miles north of Sacramento on Nov. 12, 1973. Witnesses saw them in their neighborhood that night, but neither girl returned home. Both suspects were living in Olivehurst at that time, investigators said.

Two boys were target shooting and found the girl’s bodies about 20 hours later, according to news accounts at the time. Investigators say the girls were driven to a wooded area and shot at close range.

Authorities then and now said a large-scale investigation was immediately launched and some 60 people interviewed over a three-year period before the case went cold for a lack of solid leads and was shelved in 1976.

❝ In March 2014, an investigator doing a routine look through cold cases decided to send semen samples found on Derryberry’s body and preserved for 43 years to the state Department of Justice forensics lab for analysis. Seven months later, state DOJ technicians reported that the DNA in the semen matched the genetic profiles of cousins Larry Don Patterson and William Lloyd Harbour, who each committed serious enough crimes since 1973 to have their DNA samples collected and placed in law enforcement computer systems.

❝ “Over time, anyone that’s been assigned to our investigations unit for any length of time looks into some of the unsolved cases that we have,” Yuba County Sheriff Steve Durfor said. “And this was one in particular that one of our investigators had a bit of free time and really looked very closely at this case and identified that we should send some things off and see what it might yield for us.”…

❝ Patterson was arrested Tuesday morning in Oklahoma. Harbour was arrested after a traffic stop two hours later near his home in Olivehurst, where the two victims also lived.

Both are now charged with murder. Overdue, for sure. But, the cases move towards completion because folks in the Yuba County Sheriff’s Department lived up to standards that should define all police departments. Coppers who really deserve medals. 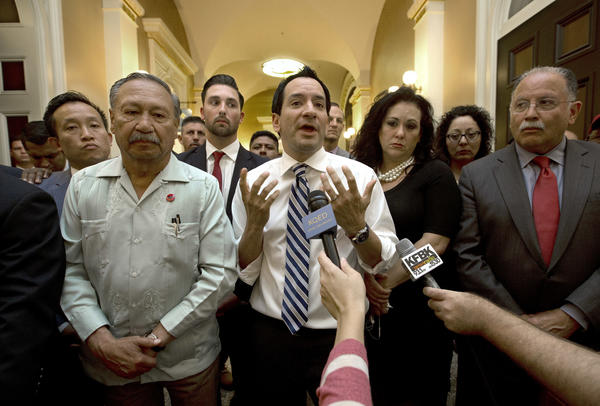 It would lower the current 10-hour-day threshold for overtime by half an hour each year until it reaches the standard eight-hour day by 2022. It also would phase in a 40-hour standard workweek for the first time. The governor would be able to suspend any part of the process for a year depending on economic conditions.

❝ The decision followed intense showdowns on the floor of the state Assembly, where a similar proposal died in June a few votes short of the majority it needed to pass.

“We are letting the signature speak for itself,” said a spokesperson for Brown.

❝ The United Farm Workers of America, which sponsored the bill, says it addresses an injustice first inflicted on farmworkers nearly eight decades ago.