❝ The Ocean Cleanup, the Dutch foundation developing advanced technologies to rid the oceans of plastic…presented the initial findings of its Aerial Expedition — a series of low-speed, low-altitude flights across the Great Pacific Garbage Patch, the plastic accumulation zone between Hawaii and California. Using a modified C-130 Hercules aircraft, expert spotters, and an experimental array of plastic scanning equipment, the expedition aims to accurately measure the biggest and most harmful debris in the ocean. This is an essential milestone in preparation for the cleanup of the patch, scheduled to begin before the end of the decade.

❝ This first-ever aerial survey of floating ocean plastic provided confirmation of the abundance of plastic debris sized 0.5 m/1.5′ and up. While the flight plan took us along the Northern boundary of the patch, more debris was recorded than what is expected to be found in the heart of the accumulation zone. Initial estimates of the experienced observer crew indicate that in a span of 2.5hours, over a thousand items were counted.

❝ For the development of a cleanup technology, it is essential to understand the problem, specifically the dimensions of the individual objects and the plastic accumulation as a whole. The nature and amount of the debris determine the design of cleanup systems, the logistics of hauling plastic back to shore, the methods for recycling plastic, and the costs of the cleanup.

❝ The quest to answer this question started in August 2015, when The Ocean Cleanup’s fleet of about 30 vessels crossed the patch simultaneously in an operation named the Mega Expedition. On their crossing wide range of debris sizes were sampled, producing the first high-resolution map of the patch. By using sampling nets that were 80x larger than conventional scientific measurement tools, it was discovered that the amount of large debris was heavily underestimated…

Once all exploration flights are finalized later this week, the results from the Aerial Expedition will be combined with the data collected during the 2015 Mega Expedition in a peer-reviewed scientific paper expected to be published early 2017…

❝ Instead of going after plastic debris with vessels and nets – which would take many thousands of years and billions of dollars to complete – The Ocean Cleanup is designing a network of extremely long floating barriers that will remain stationary in the water, enabling the ocean to concentrate the plastic using its own currents.

We won’t know if that experimental measure works until the group moves to a pilot plant stage. As important as questions of plastic pollution in our oceans appear to be – it might be nice if nation-states and governments provided some regulation and oversight along the way to solutions. 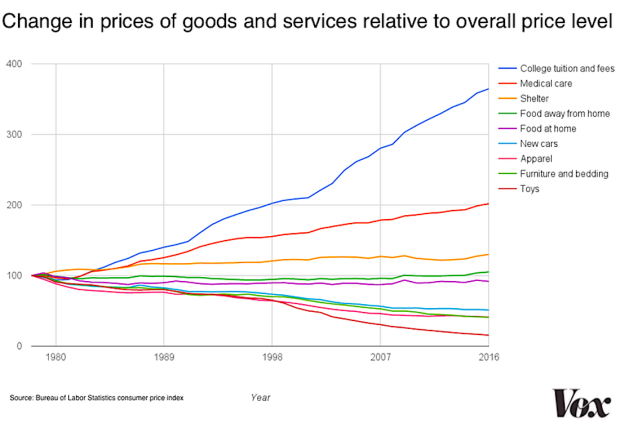 The chart is self-explanatory. Whether the masters of American education are the same kind of egregious self-serving creeps as our masters of healthcare is discussable/debatable. What is obvious remains the runaway costs. Attempts at justifying them seem ludicrous.

RTFA behind the graph over here at VOX.

Thanks, Timothy B. Lee

❝ After spending more than 40 years and $5 billion on an unfinished nuclear power plant in northeastern Alabama, the nation’s largest federal utility is preparing to sell the property at a fraction of its cost.

The Tennessee Valley Authority has set a minimum bid of $36.4 million for its Bellefonte Nuclear Plant and the 1,600 surrounding acres of waterfront property on the Tennessee River. The buyer gets two unfinished nuclear reactors, transmission lines, office and warehouse buildings, eight miles of roads, a 1,000-space parking lot and more…

❝ The sale is bittersweet for site manager Jim Chardos, who went to work at Bellefonte in 1994 expecting it to be finished as a nuclear power plant. All these years later, he commutes 90 minutes each way to work to oversee a plant that has never been stocked with radioactive fuel or used either of its reactors to generate a single watt of electricity.

Work began at Bellefonte in the mid-’70s on the backside of the nuclear energy boom in the United States, Chardos said. The utility initially planned to construct four reactors at the site, but demand for power in the region never met those early expectations and work halted in 1988. A series of starts and stops preceded TVA’s decision earlier this year to sell Bellefonte.

“If you’re going to make 1,200 megawatts you need to sell it to somebody, and if there’s no need for it you’re not going to finish,” he said. “And that’s really what’s happened.”

I advocated for nuclear power plants for over a half-century. Started-out working for a subcontractor/vendor and learned enough about the process to consider it worthy. Ideally – which means “almost impossible in the United States – nuclear power plants can produce lots of affordable electricity over their lifespan. Radioactive fuel can be recycled. Safe construction is not rocket science.

Just not in the United States. and in recent years, the diminishing cost and alternatives – especially solar electricity – makes the question moot. Nuclear power can’t compete in our markets. 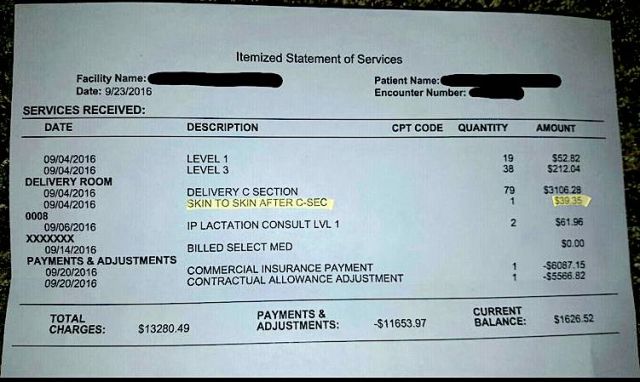 Hospital charged $39.35 to let her hold her newborn child

Thanks to Ninja Economics

And here’s a link to the article at VOX.