❝ A new Gallup poll released Wednesday shows 60 percent of American adults now say that marijuana should be legal, the highest level of support in nearly a half-century of polling on the question…The Gallup poll tracks closely with numbers from the Pew Research Center released last week showing 57 percent support for legalization…

❝ …Support for legalization has soared in the past decade among nearly every demographic group. Close to 80 percent of 18-to-34 year olds now favor legal weed, up from 44 percent in 2003 and 2005. Gallup finds that Americans age 55 and older are now the only age group with less than majority support for legalization.

❝ Support for legalization has more than doubled among Republicans in the past decade, to 42 percent today. With 70 percent support, independents are the political group most likely to favor legalization, just edging out Democrats at 67 percent.

❝ This fall, five states will decide whether to join Colorado, Washington, Oregon, Alaska and DC in legalizing marijuana for personal use…The outcome of the November measures could have a transformative effect on the marijuana policy conversation going forward: “The percentage of Americans living in states where pot use is legal could rise from the current 5 percent to as much as 25 percent if all of these ballot measures pass.”

…The real prize for legalization proponents is California: “If recreational marijuana use becomes legal in California this year, many other states will likely follow, because the ‘Golden State’ often sets political trends for the rest of the U.S.”

The latest polling out of California suggest that the legalization measure is leading by a two-to-one margin.

Who wants to be the last state to board the train to the 21st Century? 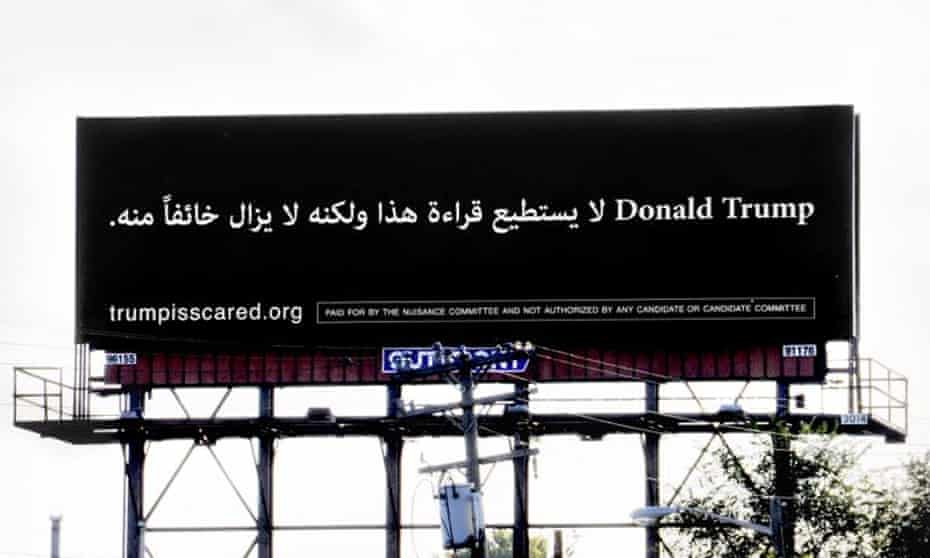 ❝ Over the weekend, a black billboard appeared alongside the highway heading into Dearborn, Michigan, the city that boasts the largest Arab population in the United States. The name “Donald Trump” is written in English, followed by Arabic script (which reads from right to left) that translates to “He can’t read this, but he is afraid of it.”

❝ The billboard is sponsored by a super PAC called Nuisance Committee, which was started by Max Tempkin, one of the creators of the racy Cards Against Humanity card game. The intent of the billboard is to spark conversation among non-Arabic speakers, encouraging them to ask their Arabic-speaking neighbors what the billboard means.

“We came up with it because we believe that Donald Trump’s hateful rhetoric is not based on reality. It’s based in fear,” Nuisance Committee spokeswoman Melissa Harris told the Detroit Free Press. “And we think that irrational fear is what’s driving his anti-immigrant message.”…

Idjits will avert their eyes to keep from being struck by lightning.

❝ The president of America’s largest police management organization on Monday issued a formal apology to the nation’s minority population “for the actions of the past and the role that our profession has played in society’s historical mistreatment of communities of color.”

❝ Terrence M. Cunningham, the chief of police in Wellesley, Mass., delivered his remarks at the convention in San Diego of the International Association of Chiefs of Police, whose membership includes 23,000 police officials in the United States. The statement was issued on behalf of the IACP, and comes as police executives continue to grapple with tense relationships between officers and minority groups in the wake of high-profile civilian deaths in New York, South Carolina, Minnesota and elsewhere, the sometimes violent citizen protests which have ensued as well as the ambush killings of officers in Dallas and Baton Rouge.

…Cunningham’s comments are an acknowledgement of police departments’ past role in exacerbating tensions and a way to move forward and improve community relations nationwide. Two top civil rights groups on Monday commended Cunningham for taking an important first step in acknowledging the problem.

❝ “…If we are brave enough to collectively deliver this message, we will build a better and safer future for our communities and our law enforcement officers. Too many lives have been lost already, and this must end. It is my hope that many other law enforcement executives will deliver this same message to their local communities, particularly those segments of their communities that lack trust and feel disenfranchised.”

The IACP members present for Cunningham’s speech gave him a standing ovation, IACP spokeswoman Sarah Guy said. Cunningham made the remarks on behalf of the membership…