❝ While the UK and much of the world struggles with overcrowded prisons, the Netherlands has the opposite problem. It is actually short of people to lock up. In the past few years 19 prisons have closed down and more are slated for closure next year. How has this happened – and why do some people think it’s a problem?…

…Learning to cook is just one of the ways the prison helps offenders to get back on track after their release…”In the Dutch service we look at the individual”…says Jan Roelof van der Spoel, deputy governor of Norgerhaven, a high-security prison in the north-east of the Netherlands.

“If somebody has a drug problem we treat their addiction, if they are aggressive we provide anger management, if they have got money problems we give them debt counselling. So we try to remove whatever it was that caused the crime. The inmate himself or herself must be willing to change but our method has been very effective. Over the last 10 years, our work has improved more and more.”…

He adds that some persistent offenders – known in the trade as “revolving-door criminals” – are eventually given two-year sentences and tailor-made rehabilitation programmes. Fewer than 10% then return to prison after their release. In England and Wales, and in the United States, roughly half of those serving short sentences reoffend within two years, and the figure is often higher for young adults…

❝ A decade ago the Netherlands had one of the highest incarceration rates in Europe, but it now claims one of the lowest – 57 people per 100,000 of the population, compared with 148 in England and Wales.

❝ The peak in 2005 was partly due to improved screening at Amsterdam’s Schiphol airport, which resulted in an explosion in the numbers of drug mules caught carrying cocaine.

Today the police have new priorities, according to Pauline Schuyt, a criminal law professor from the southern city of Leiden. “They have shifted their focus away from drugs and now concentrate on fighting human trafficking and terrorism,” she says.

In addition, Dutch judges often use alternatives to prison such as community service orders, fines and electronic tagging of offenders…”Sometimes it is better for people to stay in their jobs, stay with their families and do the punishment in another way,” says Angeline van Dijk, director of the prison service…

“We have shorter prison sentences and a decreasing crime rate here in the Netherlands so that is leading to empty cells.”

The desire to protect prison service jobs has sparked another surprising solution – the import of foreign inmates from Norway and Belgium.

In a thoughtful society, one considering useful employment to be available for all, the question of prison closures is significant. One of the bright spots on that front – is importing prisoners from other countries. In the Netherlands, prisoners from Belgium and Norway are taking up residence in cells empty of local prisoners.

RTFA. Lots of anecdotal discussion. It surely would be nice in many Western nations to have a “problem” like this one.

❝ What has happened in America should not be seen as a victory for hatefulness over decency. It is more accurately understood as a repudiation of the American power structure.

At the core of that structure are the political leaders of both parties, their political operatives, and fundraisers; the major media, centered in New York and Washington DC; the country’s biggest corporations, their top executives, and Washington lobbyists and trade associations; the biggest Wall Street banks, their top officers, traders, hedge-fund and private-equity managers, and their lackeys in Washington; and the wealthy individuals who invest directly in politics…

❝ The power structure of America wrote off Sanders as an aberration, and, until recently, didn’t take Trump seriously. A respected political insider recently told me most Americans were largely content with the status quo. “The economy is in good shape,” he said. “Most Americans are better off than they’ve been in years.”

Recent economic indicators may be up, but those indicators don’t reflect the insecurity most Americans continue to feel, nor the seeming arbitrariness and unfairness they experience. Nor do the major indicators show the linkages many Americans see between wealth and power, stagnant or declining real wages, soaring CEO pay, and the undermining of democracy by big money.

❝ Median family income is lower now than it was 16 years ago, adjusted for inflation. Workers without college degrees – the old working class – have fallen furthest. Most economic gains, meanwhile, have gone to the top. These gains have translated into political power to elicit bank bailouts, corporate subsidies, special tax loopholes, favorable trade deals and increasing market power without interference by anti-monopoly enforcement – all of which have further reduced wages and pulled up profits.

Wealth, power and crony capitalism fit together. Americans know a takeover has occurred, and they blame the establishment for it.

❝ The Democratic party once represented the working class. But over the last three decades the party has been taken over by Washington-based fundraisers, bundlers, analysts, and pollsters who have focused instead on raising campaign money from corporate and Wall Street executives and getting votes from upper middle-class households in “swing” suburbs…

Democrats have occupied the White House for 16 of the last 24 years, and for four of those years had control of both houses of Congress. But in that time they failed to reverse the decline in working-class wages and economic security. Both Bill Clinton and Barack Obama ardently pushed for free trade agreements without providing millions of blue-collar workers who thereby lost their jobs means of getting new ones that paid at least as well…

❝ Now Americans have rebelled by supporting someone who wants to fortify America against foreigners as well as foreign-made goods. The power structure understandably fears that Trump’s isolationism will stymie economic growth. But most Americans couldn’t care less about growth because for years they have received few of its benefits, while suffering most of its burdens in the forms of lost jobs and lower wages.

The power structure is shocked by the outcome of the 2016 election because it has cut itself off from the lives of most Americans. Perhaps it also doesn’t wish to understand, because that would mean acknowledging its role in enabling the presidency of Donald Trump.

Yes, I’m older than Robert Reich. Definitely more cynical. I’ve been watching the process he describes since the Truman Administration. Hypocrites like Hubert Humphrey helped found the Americans for Democratic Action as an antidote to progressive and class-conscious activism. Ain’t nothing quite like class collaboration to get your heart pumping – if your political life is dedicated to 2-party folderol over class confrontation and warfare.

Other than that – I agree with his analysis. My criticism is more of timeline and details.

I’m still a working class guy from a New England factory town. I went to work in a shithole factory when I was 17 years old – when Democrats were falling over each other to prove to Joe McCarthy, the Republican Party and America’s media barons they could red-bait with the worst of them. It took the civil rights movement, the anti-war movement, to shove Dems into class consciousness, sort of, again. What Reich describes is the second sellout in my lifetime. 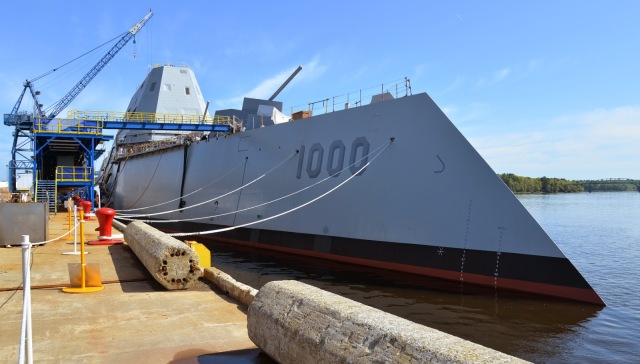 ❝ Barely two weeks after the US Navy commissioned its newest and most futuristic warship, armed with two huge guns that can hit targets 80 miles away, the service is moving to cancel the projectiles for the guns, citing excessive costs that run up to $800,000 per round or more.

The Long Range Land-Attack Projectile (LRLAP) is a guided precision munition that is key to the DDG 1000 Zumwalt-class’s mission as a land-attack destroyer, able to hit targets with such accuracy that, in the words of manufacturer Lockheed Martin, can “defeat targets in the urban canyons of coastal cities with minimal collateral damage.”

❝ The LRLAP is the only munition designed to be fired from the DDG 1000’s Advanced Gun System (AGS), a 155mm/62-caliber gun with an automated magazine and handling system. Each of the three Zumwalts will carry two of the guns – the largest weapons to be designed for and fitted on a warship since World War II…

❝ Even at $800,000 a copy, the LRLAP’s price could go higher. “That’s probably low,” the Navy official said. “That’s what the acquisition community wanted to get it down to.” The official added that there was no sense the contractor was “overcharging or anything.”…

For the record, the Navy would not comment directly on the effort to kill LRLAP.

RTFA for the rest of the soap opera. Prodigious waste of money and wholly counter to the accepted lies about our Department of “Defense”. Since the critter is designed to attack coastal and inland cities.

❝ Like thousands of white cannonballs dumped on the beach, you think these have to be manmade, perhaps part of some sculpture exhibition. But the giant snowballs are entirely natural, although the sight has not been witnessed here in living memory.

It was ten days ago that the villagers of Nyda, just above the Arctic Circle, started noticing the phenomenon. Some are the size of tennis balls. Others almost as large as a basketball…

❝ Valery Akulov, from the village administration, said: ‘Even old-timers say they see this phenomenon for the first time. These balls appeared about a week and a half ago…

❝ When the water in the gulf rose, it came into contact with the frost. The beach began to be covered with ice. Then the water began to slowly retreat, and the ice remained. Its pieces were rolling over in the wet sand, and turned into these balls.

A few more photos in the article. Way cool.