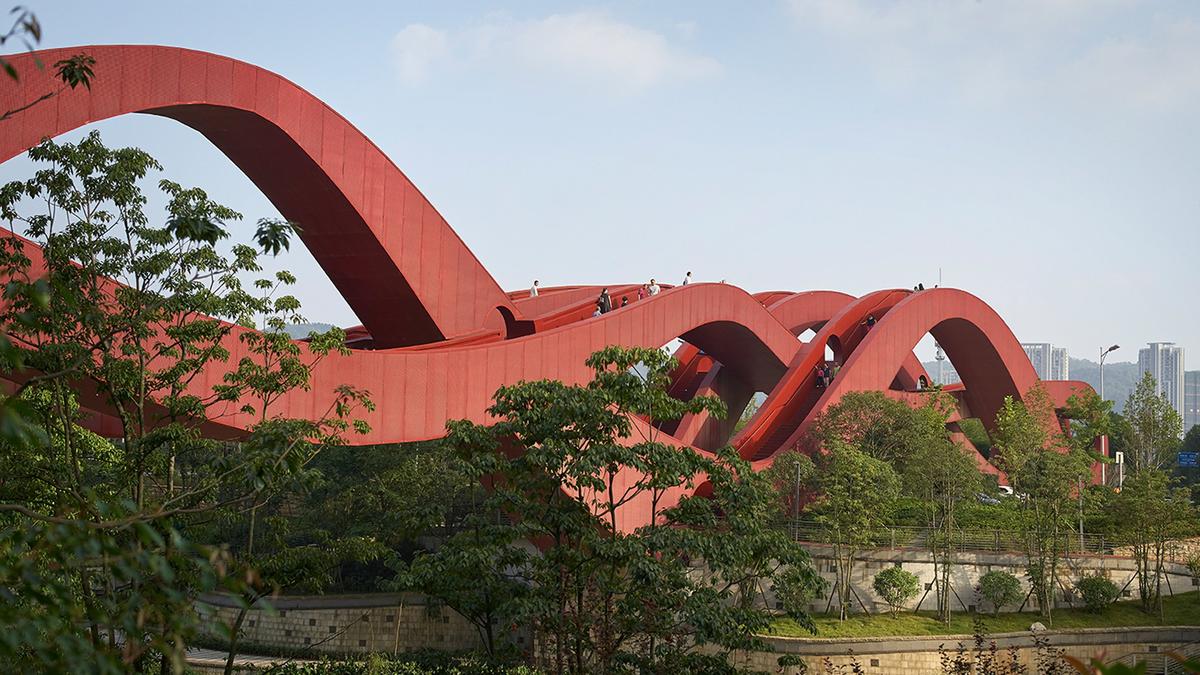 This pedestrian bridge is 185 m (607 ft) long, spanning roads, footpaths and a river. Its intertwined and interconnected threads, which rise up to 24 m (79 ft) high, touch down at different points – including on the river banks, next to a road and in a park – joining, or “knotting,” these places together.

NEXT Architects, which designed the bridge, aimed in part for it to be a new public space and attraction for what is a developing area. It was inspired by the continuously flowing Mobius ring and by Chinese knotting art. Further to informing the style and structure of the bridge, the knot also symbolizes luck and prosperity…

Walking across the bridge, people can take in views of the Dragon King Harbour River, the Meixi Lake, Changsha and the nearby mountains. It will also boast an LED lightshow that will help to position the bridge as an attraction.

The Lucky Knot bridge was designed collaboratively by the Chinese and Dutch arms of NEXT Architects…with NEXT awarded the contract…after taking part in an international design competition.

There’s a gallery of more photos inside the article. Attractive, interesting, truly outside accepted norms for bridges. Even pedestrian bridges.

❝ Most everyone knows that the islands of the South Pacific are some of the most remote and unique places on Earth, but a new study reveals just how unique they really are.

…Researchers have found traces of a previously unknown extinct hominid species in the DNA of the Melanesians, a group living in an area northeast of Australia that encompasses Papua New Guinea and the surrounding islands.

❝ A computer analysis suggests that the unidentified ancestral hominid species found in Melanesian DNA is unlikely to be either Neanderthal or Denisovan, the two known predecessors of humankind to this point.

❝ Archaeologists have found many Neanderthal fossils in Europe and Asia, and although the only Denisovan DNA comes from a finger bone and a couple of teeth discovered in a Siberian cave, both species are well represented in the fossil record.

But now genetic modeling of the Melanesians has revealed a third, different human ancestor that may be an extinct, distinct cousin of the Neanderthals.

“We’re missing a population, or we’re misunderstanding something about the relationships,” said researcher Ryan Bohlender…“Human history is a lot more complicated than we thought it was.”

One of the confounding delights of scientific methods becoming more accurate, more capable of revealing features contributing to a much larger system – the analysis can become more complex and expand the search for knowledge at the same time.