These are just some of the ways diversity is increasing in U.S. communities.

To quantify how America is changing, we used the diversity index, which measures the chance that two people chosen at random will not be the same race and ethnicity. A high score means a county has people of many races and ethnicities, while a low score means the community is made up of a single dominant group.

Click through to the article and maps. Plural. While there is an all-inclusive graphic that shunts you through a quasi-3D map, individual maps focus on each of the four trends examined.

Get used to it, folks. Trump voters probably won’t. I imagine the intellectually-curious folks who pass through here won’t have any trouble with change. 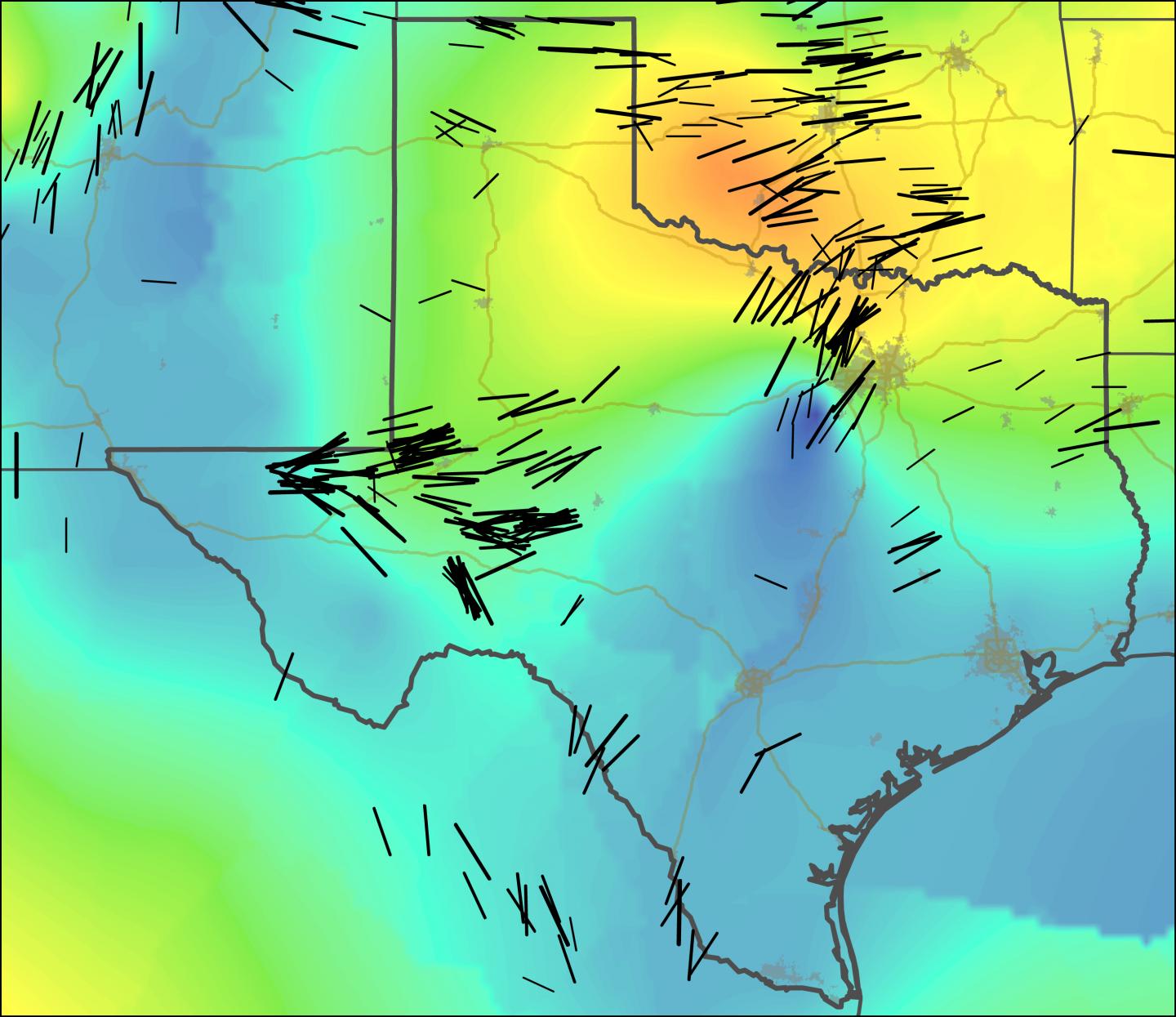 Stress maps of Texas and Oklahoma, with black lines indicating stress orientation. Blue-green colors indicate regions of extension in the crust, while yellow-orange areas are indicative of crustal compression.

❝ Stanford geophysicists have compiled the most detailed maps yet of the geologic forces controlling the locations, types and magnitudes of earthquakes in Texas and Oklahoma.

These new “stress maps…provide insight into the nature of the faults associated with recent temblors, many of which appear to have been triggered by the injection of wastewater deep underground…

❝ To create these stress maps, Mark Zoback and his graduate students Jens-Erik Lund Snee and Richard Alt interpreted data from different parts of Texas and Oklahoma donated by oil and gas companies…

When combined with information about the faults present in a given area, the scientists were able to assess which faults are likely to be problematic and why. In the areas where induced earthquakes have occurred in Texas and Oklahoma, the Stanford scientists show that a relatively small increase of pore pressure – the pressure of fluids within the fractures and cavities of rocks – would have been sufficient to trigger slip…

❝ In a related paper…graduate student F. Rall Walsh and Zoback present a methodology for assessing which faults are susceptible for earthquake triggering and which are not.

❝ The Stanford scientists also found that many of the recent earthquakes in Texas that have been suspected as being triggered by wastewater injection occurred on faults that – according to the new map – have orientations that are nearly ideal for producing earthquakes. Hence, doing this kind of study in advance of planned injection activities could be very helpful.

Useful, that is within the context of oil and gas well drillers actually making use of this information. Unless attitudes have changed greatly from the days when I was involved with that industry – I don’t expect much of a response to this study. This is an industry concerned, first and last, with easy profits, comparatively cheap costs – even when they don’t seem that way to mere mortals who worry about household budgets and even the occasional mid-strength earthquake.

Example: I got a call one sunny autumn morning in New Orleans from a Texas driller – in Dubai. Doesn’t matter what broke on what machinery. He had to stop work.

He told me he’d already spoken to one of our warehousemen and parts were now waiting outside the front door of my office in a taxi. Waiting for me to accompany them to New Orleans International Airport. I walked downstairs and got in the cab. At the airport I picked up the few boxes of parts and walked to the tarmac next to the air freight terminal. There was a full-size Boeing air freighter waiting and I placed the boxes inside an open doorway along with appropriate paperwork. The hatch closed. The jet took off headed for Dubai. No other cargo on board besides the $300 worth of parts I’d delivered.

Part of the cost of doing business. To be passed along to consumers.