Not like the brazen giant of Greek fame,
With conquering limbs astride from land to land;
Here at our sea-washed, sunset gates shall stand
A mighty woman with a torch, whose flame
Is the imprisoned lightning, and her name
Mother of Exiles. From her beacon-hand
Glows world-wide welcome; her mild eyes command
The air-bridged harbor that twin cities frame.
“Keep, ancient lands, your storied pomp!” cries she
With silent lips. “Give me your tired, your poor,
Your huddled masses yearning to breathe free,
The wretched refuse of your teeming shore.
Send these, the homeless, tempest-tossed to me,
I lift my lamp beside the golden door!”

Anthony Romero, ACLU head, on the streets, in the courts, all weekend

❝ In the weeks after the Nov. 8 election, when Donald Trump secured a surprise victory to become president of the United States, the American Civil Liberties Union received so much money in online donations — more than $15 million — that an official with the 100-year-old organization called the flood “unprecedented in our history.”…

…then Trump spent his first week as president signing executive orders and making good on some of his campaign promises, spurring massive protests across the country and the world — about women’s rights, the environment and what Trump calls his “extreme vetting” of travelers to the U.S. from seven predominantly Muslim nations…

In an interview with CNN, the ACLU had a one-word reaction: “Wow.”

Having lived through a couple of attempts to bring fascism to power in the United States, I’m encouraged. Groups like the ACLU are usually a front-row target of lard-brained right-wingers like Trump and Bannon. Civil liberties – and their defenders – are an automatic target of creeps who front themselves as “strong leaders” and other code words for wannabe dictators.

Early days of McCarthyism,there were beaucoup folks with good intentions, civic understanding – and no guts – who would donate “cash only” to an organization of constitutional lawyers willing to fight for preservation of American standards. That folks have more courage – and greater willingness to drop their hard-earned buck$ on the barrel-head to support the fight for freedom is more than encouraging. It bodes well for the continuing battle.

❝ US authorities have seized $20m in cash discovered in a bed frame under a mattress in a Massachusetts flat…The cash is believed to be linked to a $1bn pyramid scheme involving TelexFree, a company that claimed to provide internet phone services.

Investigators uncovered the cash while following a Brazilian man, who was charged in connection to the haul.

The US attorney’s office in Massachusetts tweeted a photo of the windfall of cash, which was found at the flat of Brazilian national Cleber Rene Rizerio Rocha, 28, in Westborough, Massachusetts.

Mr Rocha was arrested and charged with conspiring to commit money laundering.

Crooks always think everyone else is a crook, too. 🙂 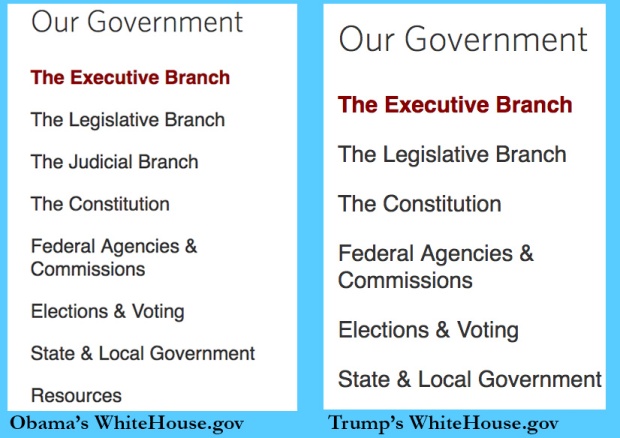 Notice the difference between reality of our Constitution [on the left] and how Trump [on the right] thinks it works? It took a lot of shouting and finger-pointing to get the creeps running the White House to sort out the page explaining how checks and balances are supposed to work in this nation – and return the Judicial Branch to this illustration of powers and responsibilities.

At least for a while.

Twitter announced Friday it received two national security requests, one each in 2015 and 2016, asking for users’ account data without informing the affected users. The company could not reveal this earlier since it was bound by gag orders until now that restricted it from openly speaking about the matter.

The requests were received in the form of national security letters…

FBI requests go far beyond the limitations set by a 2008 Justice Department legal memo, which said such orders could only be restricted to phone billing records…

NSLs are government orders used for obtaining communication data available to service providers. They are usually accompanied by a gag order restricting the provider from informing the user whose data is obtained. The legal tool has been available since the 1970s, but has been put into regular usage for varied purposes since the passing of the U.S.A. Patriot Act…

We’re posting this because while some Democrats are working sincerely to bring the supposedly liberal half of the TweedleDeeDum 2-Party system in line with the real needs of working folks – they will need concerned individuals to twist their arms, remind them to walk away from Cold Warrior lies and rationales. Stop snooping on ordinary citizens.

It's gone now but someone had edited the Wikipedia page for invertebrates to include Paul Ryan 😂😂😂 pic.twitter.com/Oe7qOSp027

Not certain why he appears above “sponges” and “other worms”.

Open mind and the good sense to carry the best of previous generations’ principles forward into the 21st Century. Unlike Donald Trump heading full steam [coal-powered of course] back to the 19th Century.

Here’s what Trump is on his way to achieving with this folly.