❝ A sense of humor, appreciation of a good joke, knowing when to let the stupid ones go, and the ability to tell the difference is a very basic part of human socialization and the ability to interact with others. Donald Trump’s inability to do so is a central part of his character, and everything he’s ever done is an indication that he possesses the dullest of minds, a feeble flesh so consumed with superficiality and the selfishness of ego, so obsessed with the perceptions of others and protecting the fragile shell of his self-worth that he is incapable of appreciating the wonders and the miracles that five thousand years of human civilization have to offer to him. This leaves him devoid of leadership qualities. More significantly, since he has a fundamental lack of appreciation for what our country is and what it can produce and what people have to offer, how can he be trusted to guide this nation into the future?

❝ No wonder he can’t take a joke.

A new rule that aims to safeguard essential antibiotics for humans by limiting their use in food animals is now fully in effect.

Under the Food and Drug Administration policy, antibiotics that have been designated “medically important” — in other words, they’re needed to treat people — cannot legally be given to healthy animals to speed their growth. The policy, three years in the making, required producers of agricultural antibiotics to change labeling on the drugs to make clear they should not be used for so-called growth promotion. All manufacturers agreed to abide by the new rule.

The policy also requires that from now on, food animals can only be given medically important drugs under the supervision of a veterinarian — a move designed to restrict their use to the treatment of animal illnesses.

An FDA report on antibiotic use in food-producing animals released just before Christmas revealed that sales of medically important antibiotics rose by 2 percent in 2015, and that from 2009 to 2015 sales of these drugs to the food animal sector increased by 26 percent. The increased sales in 2015 could be the result of a commensurate rise in food animals produced — but critics of the heavy use of these drugs in agriculture note sales haven’t come down…

Scientists and public health professionals have long warned that the increasing use of antibiotics in the rearing of food animals such as chickens, pigs and cattle, and farmed fish and seafood is fueling a rise in so-called superbugs — bacteria capable of evading the drugs.

That puts at risk procedures that have revolutionized modern medicine. Organ transplants, cardiac bypass surgeries, even safe caesarean section births are an accepted part of medical practice but could become much more dangerous to perform if superbugs continue to proliferate…

As things currently stand, antibiotics can be used to prevent illness, which can also lead to prolonged use. Advocates for more judicious use of antibiotics in agriculture argue that this is growth promotion by another name. They insist disease prevention goals should be achieved through better and more humane production practices that reduce the disease risks associated with factory farming.

And, so, the battle is won; but, not the war. Humane, healthy conditions for livestock are important to the health of consumers in more ways than one. Most reasonable, informed people know this. Politicians and their appointees invoke the ever-present American god of sophistry to pretend otherwise. 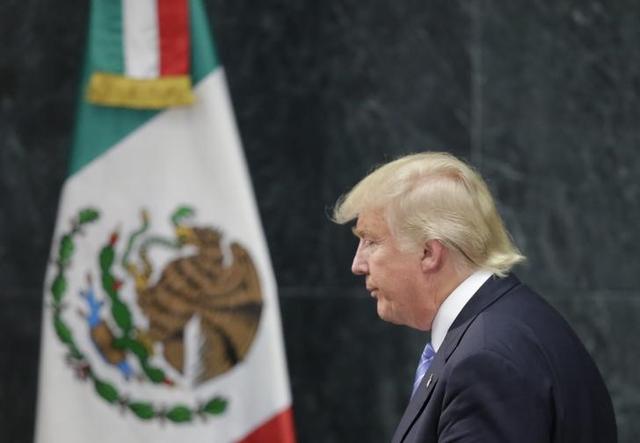 ❝ Miriam Grunstein is an attorney and former advisor to the Mexican Senate on energy and international law. Legislation has been proposed at the Mexican Senate that bans the use of public funds on any project that is “against the country’s interest.” That’s widely taken to mean the wall.

“Just because of, you know, tantrums, we could really waste a golden opportunity of uniting,” Grunstein said.

❝ The proposed Mexican legislation would lead to a review of some of the most fundamental treaties between the two countries, among them the 1848 Treaty of Guadalupe. The treaty ceded Texas and California, as well as parts of Arizona, Colorado, New Mexico, Nevada, Utah and Wyoming to the U.S.

❝ The bill also states, “in cases where the assets of our fellow citizens or companies are affected by a foreign government, as Donald Trump has threatened, the Mexican government should proportionally expropriate assets and properties of foreigners from that country on our territory.”

Translated that means that should Trump follow through on threats to expand the wall, withdraw U.S. participation in NAFTA or stop remittances, Mexico could target U.S. assets in Mexico. Assets estimated by the Office of the U.S. Trade Representative at over $100 billion.

Trump’s blather seems to have drawn a film of ignorance over the brains of many papier-mache journalists. Favorite example? Financial analysts who wonder why housing construction “suddenly” lacks sufficient skilled and/or experienced labor to meet demand.

Reason 1: Greedy contractors who put Mexican immigrant labor to work for cheaper than trained native workers. Driving the latter from that jobs market a couple of decades ago.

Reason 2: The Great Bush Recession killed many of those jobs. Folks went back to Mexico. Harder to return, now – especially since many of those who returned to Mexico now have jobs back home. Why come here to get their chops busted all over again?