❝ If President Donald Trump is in need of an ego boost on Saturday, Twitter may not be the place to find it.

The president was slapped with a scalding reality check, compliments of Sen. Bernie Sanders, after suggesting his supporters have their own rally.

“It would be the biggest of them all!” Trump proclaimed on Twitter Saturday.

❝ Exciting idea, except that Trump had a rally just last month, for Inauguration Day, as Sanders reminded him.

“They did. It wasn’t,” Sanders smartly snapped. 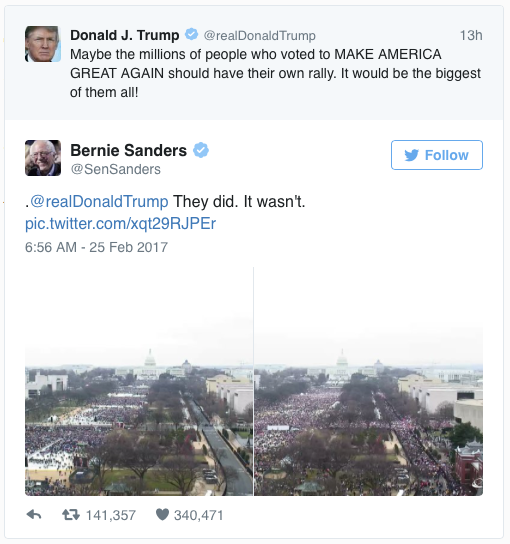 ❝ Apple doesn’t want to see it scrapped. Neither does Intel or Tiffany & Co.

But the U.S. conflict-minerals law — which requires American public companies to avoid using minerals that fund war and human rights abuses in the Congo region — is widely seen today as facing its most serious threat since its passage in 2010.

❝ The White House is considering a suspension of the law, part of U.S. President Donald Trump’s pledge to cut government regulations and a long-held goal of the U.S. Chamber of Commerce. If that does not happen, congressional Republicans are expected to try defunding it, which they attempted last year. At the same time, federal regulators recently announced that they plan to “reconsider” the law’s scope. The acting head of the Securities and Exchange Commission, the agency that oversees the regulation, called it “a misguided rule.”

❝ …Several major companies say they will not abandon the standard even if the law is gutted.

While corporations normally cheer in unison when regulations are cut, this controversial rule has prompted a different reaction.

That is because something interesting has happened since the law took effect: Companies say the conflict-minerals law has created an expectation both inside their corporate headquarters and among consumers that their products will be “conflict-free.”

They do not want to back away from that now. But they worry their efforts will be undermined without the law to support them.

❝ “We do this because it’s the right thing to do,” Apple said in a statement about its conflict-minerals compliance. The tech giant said it plans to keep those protections “regardless of whether or not the law requires it.” Apple said it is pleading its case behind the scenes to White House and SEC officials.

Intel said it, too, was committed to “responsible sourcing of minerals” regardless of regulatory changes…

Richline, a major jewelry company, said it would remain committed to the standard “because the cause is worthy of these efforts.” Richline added that it was against “weakening or repealing a process that has already been set in motion and is just beginning to affect meaningful change.”

Not that Trump, his neo-con Republican bubbas, ever cared about how much blood is spilled to promote their profit margins. The useful part of all this is that a number of taste-making American companies have realized they benefit from aligning themselves with humane goals.

Now, let’s see if we can drag the pimps of profiteering back into reasonable behavior.

❝ The smokestacks of the Navajo Generation Station rise 775 feet from the sere landscape of the Navajo Nation in northern Arizona, just three miles away from the serpentine, stagnant blue wound in sandstone known as Lake Powell. Red rock cliffs and the dark and heavy hump of Navajo Mountain loom in the background. Since construction began in 1969, the coal plant and its associated mine on Black Mesa have provided millions of dollars to the Navajo and Hopi tribes and hundreds of jobs to local communities, as well as electricity to keep the lights on and air conditioners humming in the metastasizing cities of Phoenix, Tucson, Las Vegas and Los Angeles. Yet they’ve also stood as symbols of the exploitation of Native Americans, of the destruction of the land, and of the sullying of the air, all to provide cheap power to the Southwest.

But coal power is no longer the best energy bargain. And…the plant’s four private utility owners, led by the Salt River Project, voted to shut down the plant at the end of 2019, some 25 years ahead of schedule. When the giant turbines come to a halt and the towers topple in the coming years, the plant will become a new symbol, this one of a transforming energy economy and an evolving electrical grid that is slowly rendering these soot-stained, mechanical megaliths obsolete.

❝ Salt River Project officials have been very clear…They note that it’s now cheaper for them to buy power for their 1 million customers from other sources than it is to generate power at Navajo, thanks mostly to low natural gas prices. A November 2016 study by the National Renewable Energy Laboratory found that the Central Arizona Project pays about 15 percent more for electricity from the power plant — of which it is part owner — than it would if it bought power wholesale from the Mead trading hub located near Las Vegas.

❝ None of this will change even if President Donald Trump rolls back the Clean Power Plan or other regulations put in place by the Obama administration. In fact, if a drill-heavy energy policy is put into place, it will increase natural gas supplies, thus increasing the spread between natural gas and coal.

It’s a sign of the times. We will continues to see pimps like Trump – owned body and soul by the US Chamber of Commerce – run their collective mouths, beat the drums of war and obedience, demand resurrection of backwards methods that will only serve to further slow our national economy.

Science and technology will continue to forge ahead. 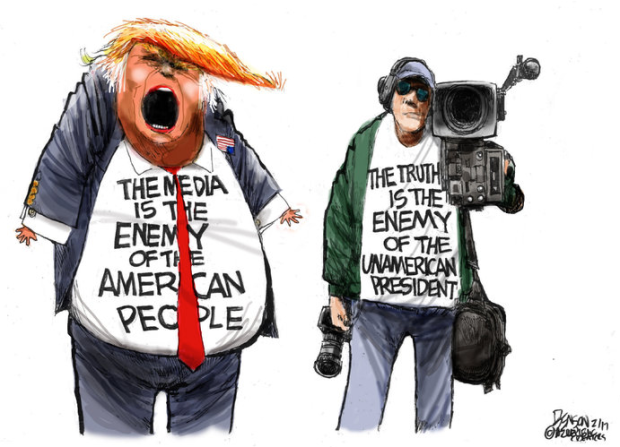